The release of a new Walter Hill film – especially one with a fairly unique premise, fantastic cast and a score produced by Giorgio Moroder – should be cause for rejoicing. When the film premiered last fall at the Toronto International Film Festival, however, the reaction was solidly negative, not just for the quality of the film but for its general concept. Hill and the cast had to defend the film on several occasions, leading to a negligible release with minimal publicity, appearing on DVD and on streaming under two different titles, neither of which match the one it played under at TIFF. So goes the strange story of THE ASSIGNMENT, or (RE)ASSIGNMENT, or TOMBOY, depending on how you happen to come across it. (I’ll be referring to it as THE ASSIGNMENT, as that’s the title offered by streaming services.) 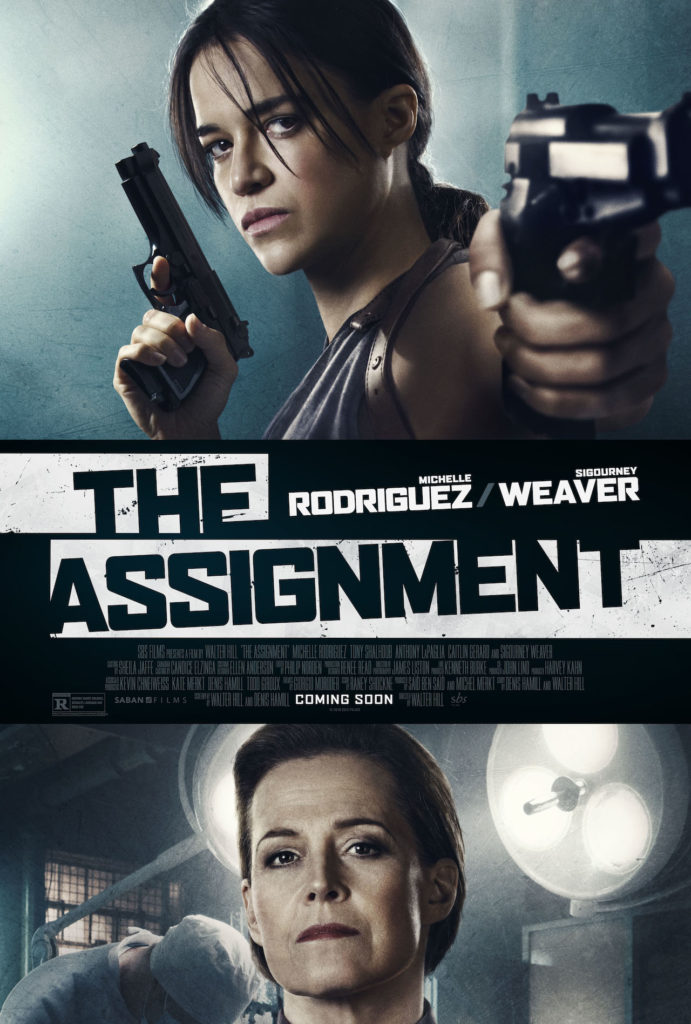 It’s not altogether surprising that the plot may have rankled those seeking to forward representation of transgender characters in media. THE ASSIGNMENT is a forced-gender-reassignment revenge tale, as the lead male character is given a nonconsensual sex-change operation and spends the remainder of the film in a new, female body, seeking out those responsible. It’s not a completely unique premise, and it’s one that’s been played both straight as a thriller (such as the 1995 film SYNAPSE, Leon Klimovsky’s 1974 I HATE MY BODY and a recent Spanish film I’m hesitant to spoil) or for comedy (as in 1964’s GOODBYE, CHARLIE, 1989’s CLEO/LEO or 1991’s SWITCH), but with transgender issues becoming more visible, it’s a bit surprising to see nonconsensual gender switching being used as a plot point in a genre context that almost entirely glosses over any actual significant trans issues.

(Curiously, and this should probably be a subscript but what the hell, virtually all of the previous nonconsensual sex change films involve men being forcibly placed into women’s bodies, rather than the other way around. There are a few exceptions, like 1986’s WILLY/MILLY or, ugh, 2002’s THE HOT CHICK, but for the most part, the sex change is meant is perceived by the character and the audiences as a “downgrade” from being a man to being a woman, as though simply being female is a form of punishment.  Someone’s probably written a paper about this. Go read that. I’m not going to watch THE HOT CHICK.) 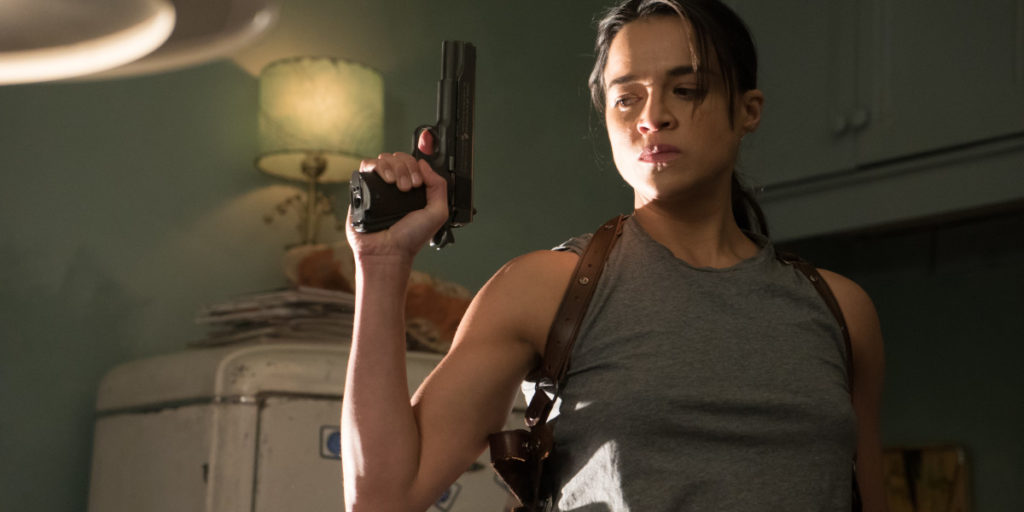 As it turns out, Denis Hamill’s screenplay was originally written in 1978, and decades and drafts later have changed the original plot structure, but in terms of social context, it’s still more focused on being a low-budget thriller rather than attempting to use the ideas in order to explore the concepts that it brings up. It’s the sort of film that can be considered “problematic” only in the most general sense – it’s far too half-assed in its execution and knowledge of actual transgender issues to be able to discern any intentional negative context. This isn’t to say that THE ASSIGNMENT is bereft of any type of social examination, it’s just that what minimal examination it has is more focused on societal gender roles than anything related to the trans experience.

The film opens with Frank Kitchen (Michelle Rodriguez), physically a woman, explaining that he’d “killed a lot of guys. They were worthless pieces of shit” and determining that her forcibly-chosen gender was “better than what I deserved.” This is coupled with the story of Dr. Rachel Kay (Sigourney Weaver), imprisoned in a criminal mental institution, telling the tale of how she got there to Dr. Galen (Tony Shalhoub) in an impetuous manner, Kay dismissing Galen’s attempt to psychoanalyze her and mocking his perceived lack of cultural knowledge. 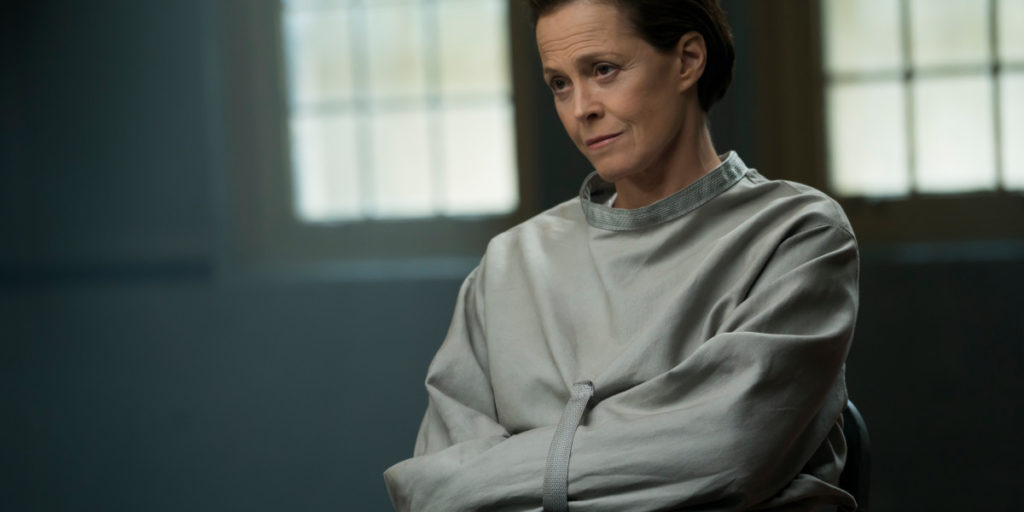 The backstory reveals that Kitchen was a paid hitman, and three years ago, he had killed Kay’s brother, an art-dealing, pinball machine-collecting addict who owed a substantial sum to the mob. This prompts Kay, a disgraced surgeon who supplied black market sex changes for those unable to afford or take the time for professional assistance in order to finance her own, more dubious experiments (these are mostly alluded to rather than explored), to seek out Kitchen for revenge. Using her mob ties (primarily mob boss Anthony LaPaglia), Kay has Kitchen drugged and kidnapped, where she operates on him, changing his physical gender and leaving him in a hotel room with some basic information as to why she did it, along with clothes and hormone pills. (Though not, apparently, sensible shoes, as Kitchen takes off into the night barefoot.)

One thing to note here is that Rodriguez plays Kitchen both before and after the transformation, the primary difference being that the male Kitchen has a lot of facial hair, and the female Kitchen has breasts and a near-lack of body hair at all, quite distinct from the hirsute body double used for Kitchen’s frontal nude scene.  It’s a decent performance, but physically, it speaks to the complete lack of knowledge about actual sexual reassignment operations, as Kitchen emerges looking as though he just got a shave and a head transplant onto an entirely new (and free of any wounds that wound necessitate any type of recovery time or even bandage outside of the face) female body. There’s some talk about how experimental and new Kay’s work is, but it just feels like an attempt to brush away the fact that nobody actually knew a damn thing about the surgery going in. At this point, THE ASSIGNMENT basically becomes a science fiction film. 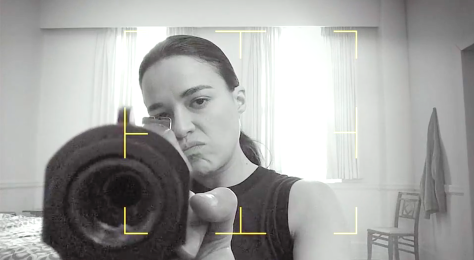 This wouldn’t entirely be a bad thing, and THE ASSIGNMENT certainly borders on embracing the ridiculous pulp notions it suggests on some occasions. Weaver, in particular, seems to be in her own movie, reciting ponderous, condescending dialogue in alternately a straitjacket or a men’s suit, the combination of which suggests some additional gender play that never quite gets delivered. “I’ve never concerned myself with my partner’s pleasure,” she snarks when asked about her sex life.

The problem is that Kay is such a confusingly-written character that the role never becomes as big as life as Weaver seems to want it to be. Her chastising of Galen’s ignorance of what she perceives as high culture amounts to Hamlet and Edgar Allen Poe – less ponderous symbols of intellectual elitism than what someone puts into a screenplay in a first draft as a reminder to come up with snobbier references later. You can’t quite tell if she’s a mad scientist or a determined doctor with some impressively bad ideas, or if her scorn on everyone around her is validated by her intelligence. The fact that her sequences with Kitchen are so disparate both in presence (the two only appear in the same scene once) and in tone (Kay’s come off bordering on high camp, while Kitchen’s feel like a grim crime thriller) leave the character alone on a desolate island of exhausted disinterest, separated entirely from the film around her. When she talks about her reasons behind the gender switch as a way to determine if Kitchen’s violent personality traits are inherently interlaced with his physical gender, it feels more like an attempt to fill a plot point rather than a genuine exploration of the convoluted character.

The Kitchen segments aren’t considerably better, though there are a few nice touches, such as his narration to not use a silencer during one of his hits due to it creating a feeling a chaos that throws off the aim of potential guards. The film sets up a relationship between Kitchen and a female nurse (Caitlin Gerard), and while it’s welcome that little is made of Kitchen’s physical gender changing to affect the attraction between the two, it’s not entirely clear if this was intentional or the film just never bothered getting around to addressing it. However, even these attributes are negated by the occasionally pointless shock fantasy sequence or the use of black and white drawings to exit scenes that reference its comic-book origins, but just end up recalling SIN CITY or, more accurately, the needless “Director’s Cut” version of Hill’s THE WARRIORS.

The problem with THE ASSIGNMENT isn’t that it’s motivated by any sort of malice towards the trans community. It’s that it bungles the potentially interesting ideas it has, occasionally throwing  out a reference to gender roles but otherwise doing little with the premise beyond giving Rodriguez a chance to kick some ass with a beard on. The anger towards the film was directed towards the concept, but while the concept may not be to anyone’s taste, it isn’t in itself an issue and could be used to either explore some genuine ideas or to be an entertaining exercise in high-concept pulp action. Instead, the anger should be directed at the execution, as THE ASSIGNMENT doesn’t commit to either direction fully, and the results are a genuine disappointment coming from a genre master like Hill. It’s not a terrible film, but it’s a surprisingly sloppy one, starting and dismissing visual themes and plot lines almost at random, and it never comes close to living up to its pedigree or potential.