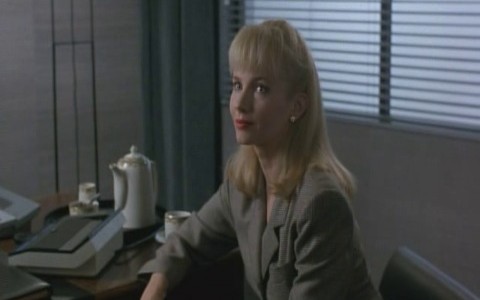 2014 marks the 25th anniversary of a number of great films from 1989, and we can expect this year to be full of retrospectives and re-releases on the likes of such classics as BATMAN, THE LITTLE MERMAID, DEAD POETS SOCIETY, INDIANA JONES AND THE LAST CRUSADE and TROOP BEVERLY HILLS. And when Empire Online presents “An Oral History of TURNER & HOOCH,” featuring a confused Jim Belushi who was just thankful someone called him, we will read it and bask in the warming glow of nostalgia and mildly new information.

We here at Daily Grindhouse, however, would like to take a look past the multiplex of our youth, because we had embarrassing hairstyles then and do not wish to be reminded of the fact that we saw POLICE ACADEMY 6 in the theater. Instead, we’d like to take a look at the little-seen and less-remembered films of 1989 that may have gone straight to video (or, at best, inched their way into a few dozen theaters) and disappeared into obscurity.

Each Thursday in 2014, we’ll be presenting a look back at one of the lesser-known films of 1989. As a rough guideline, our only stipulation is that the film have fewer than 1,000 votes on the IMDb, so if you have any suggestions as to 1989 films to cover, let us know via Facebook or shoot us an e-mail at paul@dailygrindhouse.com.

In honor of Martin Scorsese’s THE WOLF OF WALL STREET playing to packed houses, our first entry, DEALERS, comes from a kinder, gentler era of Wall Street trading, the 1980s. It was a nicer time, when stock traders devoted all of their available free time to tutoring underprivileged youth and volunteering in soup kitchens. “I have made far too much money,” they’d say, dropping a Ben Franklin into an envelope for USA for Africa. “Also, Toto just sounds so great on this album.”

Academy Home Entertainment sure did a hell of a great job at trying to make DEALERS seem appealing. The trailer makes it look like the sexiest, most action-packed exhausting thrill ride of a flick you could ever make out of a movie about the stock market. It looks like WALL STREET meets FATAL ATTRACTION with a plane. It promises sex, violence, danger in the high-stakes world of finance and a seductive Rebecca De Mornay. It’s no wonder it seemed to be on the shelves of every video store in the country and received more than a fair share of cable and pay-per-view airings after a negligible theatrical release in November of 1989.

“We could lose another hundred million!” That’s a whole lot of money! And Rebecca De Mornay looks so dangerous and sexy and probably evil! DEALERS must be amazing.

DEALERS, however, isn’t a thriller. It’s not particularly sexy. It’s not even a scathing portrayal of greed culture in the world of high-stress stock trading culture. There is no nudity. There are no car chases. There are, however, lots of middle-aged white people yelling at each other in a highrise office, and Rebecca De Mornay does show up for a bit.

DEALERS probably sounded like a good idea at the time. “Hey, Mr. McGann, you get to play a stock broker in the high-stakes world of finance, and you get to have sex with Rebecca De Mornay and fly a plane!” The fact that said sex was fully clothed and, for some reason, against the backdrop of a bunch of pink balloons was most likely not included in his offer.

In DEALERS, McGann plays Daniel Pascoe, an up-and-comer in the high-stakes world of finance. When his boss kills himself in the film’s opening after losing a hundred million dollars for the company (the only time we see anything resembling violence in the entire film), Pascoe assumes that he’ll be next in line, but he finds the higher-ups (including a pre-“CSI” Paul Guilfoyle) have instead installed hotshot Anna Schuman (De Mornay) into the slot due to her amazing ability to carry on two phone conversations at once.

Pascoe doesn’t take kindly to this, so he begins plotting against her by trying to dig up dirt, but he’s also pretty sexually frustrated, as his girlfriend takes off to Frankfurt at the beginning of the film. Eventually the rivals fall for each other and the company tries to get them to work in tandem in an effort to save the company, even though he wants to take risks and she wants to take a more conservative approach. It all ends with people yelling at computer screens because of a deal that Pascoe took a chance on, and then some middle-aged white people yell eat each other and it’s over.

If this sounds the least bit interesting, I’m clearly doing something terribly wrong. DEALERS is a dull film that never seems to have any ambition beyond being a dull film about two people who happen to work in the high-stakes world of finance. For as much pressure as is depicted from the leads, they may as well be dueling checkout clerks at a grocery store, though the high-stakes world of finance gives them the chance to fly planes and have scenes set in classy-looking mansions. McGann and De Mornay are both fine, but the script doesn’t give them anything but clichés to play.

As much as McGann’s career has been a bit of a missed target, the film shows the issues De Mornay has had as well – filmmakers just never seemed to know what to do with her. An undeniably talented and beautiful woman, De Mornay raised eyebrows in RISKY BUSINESS but then struggled to find films that could use her as more than a sexpot, as she always came across as having more charisma than the shallow screenplays she got would allow her to portray. In DEALERS, she’s not given a character to play so much as a love interest cut-out, which is especially disappointing as sexism in the financial industry would seem to be a prime concept worth exploring.

Now, one could argue that it’s not interesting to me because I don’t really know anything about stock trading. (I use a “Pop-o-Matic Bubble” in order to determine my 401K plans. From what I understand, this makes them slightly less reliable than flipping a coin, and slightly more reliable than, say, listening to Jim Cramer.) But I love most of the film I’ve seen about trading — WALL STREET, MARGIN CALL, BOILER ROOM — even if certain moments just feel like anxious yelling at digital readouts. Unfortunately, DEALERS barely involves any trading at all, instead focusing on light romance and vague corporate espionage, and doesn’t even bother explaining what little trading it actually contains.

Director Colin Bucksey came from (and after this, returned to) a TV background, helming episodes of “Miami Vice” and “Wiseguy” along with made-for-TV flicks like the British BLUE MONEY (with Tim Curry) and the remake of NOTORIOUS (also with Guilfoyle), so it’s not too surprising that DEALERS feels like a TV-movie. Unfortunately, it doesn’t even feel like a good TV-movie, as none of the characters are interesting enough to care about and the plotting isn’t compelling enough to prevent you from dozing off. Some nice cinematography helps, but all of the glass elevator shots in the world can’t bring pathos to characters that haven’t been given anything to do.

So it’s not surprising that DEALERS vanished off the cultural radar as quickly as it appeared, consigned to the VHS bargain bins and footnotes of Rebecca De Mornay biographies. The most impressive thing about DEALERS is that Academy bothered to pick it up and did such a great job selling the thing, and that the publicist behind the film’s improbable U.S. release isn’t credited anywhere is a genuine tragedy for huckster history aficionados everywhere.