Home  ⁄  News  ⁄  DAVID A. PRIOR SETS FORTH IN PURSUIT OF THE DEADLIEST PREY! 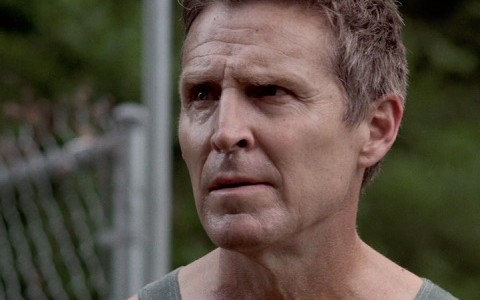 There’s no real logical reason for David A. Prior’s 1987 action flick DEADLY PREY to have as much of a cult following as it does. One of a seemingly infinite number of action pics churned out by Prior for AIP (Action International Pictures) in the ‘80s, there’s nothing on the surface that makes DEADLY PREY unique. It’s got a generic title and a generic premise of a Vietnam vet (Ted Prior, David’s brother) who is forced to be hunted by a group of mercenaries thanks to a deranged ex-military officer.

But there’s just something about DEADLY PREY that touched a nerve with plenty of cult movie enthusiasts, to the point where it regularly gets cited as a must-see for crazy ‘80s action fans despite the fact that it’s been long unavailable on any kind of legitimate media format. Prior’s action movies often have an odd structure of bizarre dialogue, unique editing and oddball scenes punctuated by performances that are pitched either one octave higher or lower than they would normally be, and DEADLY PREY has all of these things in spades, coupled with an easy-to-follow plot that simultaneously doesn’t make a whole lot of sense. Ted Prior’s performance as the worm eating, short shorts-wearing, trap-building Mike Danton is strangely hypnotic, as is the loopy performance by David Campbell as the hunter in charge. Whatever it is that separates the MIAMI CONNECTIONs from the MIAMI COPSes of the world, DEADLY PREY has it in spades.

Prior probably could have done the simple thing and re-released DEADLY PREY with a load of special features, embracing the film’s cult following, but instead, he did the world of cult cinephilia one better and made an all-new sequel, featuring some of the same cast and essentially recreating the film in the “modern” era. It’s not an unprecedented decision – H.G. Lewis returned to directing after decades with BLOOD FEAST 2: ALL YOU CAN EAT, Ted V. Mikels suddenly felt the world needed CORPSE GRINDERS II and, most recently, James Best faced off against rabid rodents in the 53-year-later sequel RETURN OF THE KILLER SHREWS. It’s still a surprising development, and one that came from years of the slow building of the cult of DEADLY PREY, culminating in a revival showing at Los Angeles’s Cinefamily in 2011 that inspired the Priors to revisit the foresty territory.

Shot in Mobile, Alabama, THE DEADLIEST PREY is set 25 years after the end of the ending of DEADLY PREY, when ex-marine Mike Danton finally turns the tables on the psychotic mercenary trainer Hogan (David Campbell), forcing him to undress and taking us to end credits just as Danton lets out his battle-cry. Danton is now living with his wife Allison (Cat Tomeny) and son (Ted’s son, Michael Charles Prior) when Hogan is released from prison. Hogan, being a psychotic mercenary trainer, has a plan, which goes into motion as soon as he’s driven away by his assistant/sexpot Sophia (Tara Kleinpeter, whose placement of pauses in dialogue is entertainingly random).

Through methods never full explained, Hogan has managed to get the same set-up that he had before, “training” a group of mercenaries by having them hunt human prey. This time, however, there’s a high-tech component involved, as he’s had two backers invest $5 million in setting up cameras everywhere in order to live-stream the slaughters over the internet. How this is supposed to be profitable is anyone’s guess, but hell, it’s DEADLIEST PREY. Just roll with it.

Naturally, Hogan’s intention is to get revenge on Danton, whom he quickly kidnaps, and it’s DEADLY PREY all over again. Danton promises that he’ll kill everyone, and he soon does a pretty good job of it, spewing ultra-tough guy witticisms while taking out soldiers with an endless supply of knives. (And by “soldiers,” I mean “some guys that look as though they were picked up from the nearest Comic-Con and dressed in camouflage gear.”)

The plot is furthered by the intervention of three self-described computer hackers played by Everything is Terrible’s Dimitri Simakis (identifiable as such because he wears an EiT T-shirt), artist Suki-Rose Otter and “Destroy All Movies!!!” co-author Zack Carlson. Having “already played everything out there,” their search for something “more interactive” leads them to the site, where they become determined to find Danton and help him, even if that just amounts to driving him around for a while. One character keeps says “true dat” to the point where it feels like a running gag rather than a personality quirk, but that’s just the sort of strange inexplicable trait that makes Prior’s filmmaking techniques something unique.

Prior and Campbell both seem to be relishing their roles, with Prior, who actually looks better and more believable as a badass now than he did a quarter-century ago, playing his role with the sincerity of a perfect straight man even when the dialogue is outright ridiculous, and Campbell taking the opposite tact, relishing every moment of psychosis he gets to spew as he gleefully shoots anyone who does anything even remotely confrontational. Hogan may be responsible for more of his allies’ deaths than Danton, and comments that he “killed more people than cancer!”

DEADLY PREY’s inexplicably homoerotic tension between Danton and Hogan is referenced with an interchange between Hogan and Sophia, where she comments “Sometimes I think you would rather screw him than me” and he responds, “You might be right,” and the film even seems to set up a sex scene between Hogan and Sophia that never materializes. (DEADLIEST PREY certainly shows signs of modernization – the rape sequence of DEADLY PREY has no equivalent here, and the whole film feels less cynical even if it sports just as much violence.)

The rest of the cast is varying degrees of entertaining, though you get the impression many of the soldiers and people watching the events from bars across the nation where the “game” has become a national pastime (!?) are friends and investors rather than actors. Fritz Matthews returns as the twin brother of the character he played in the first film, and his somnombulistic acting, often hidden behind mirrored sunglasses, serves as a counterpoint to Campbell’s enthusiastic scenery-chewing.

THE DEADLIEST PREY is often entertaining, especially once you consider the strangely naïve ideas the film has about how the internet works, and there’s plenty of blood squibs, explosions, and even a point where Danton takes down a helicopter with one shot. There’s also dialogue like this, which seems like the response line with written with only random words from the first line in mind:

Danton: “What do you want me to do first? Take out the garbage or brush my teeth?”

Danton’s Wife: “Both. And in that order, please.”

But odd dialogue, plot twists that don’t make any sense and acting that defies description are features of DEADLY PREY, and they work just as well in the follow-up. While THE DEADLIEST PREY never reaches the entertaining highs offered by the original, it’s still a good ride, and anyone who’s a fan of Prior’s work in any form should have a great time.

The sole special feature on the DVD offered exclusively by Prior is an 85-minute “Making of” extra, 5 minutes longer than the feature itself! However, there is only about ten minutes of interview footage, and the rest of the time is composed of behind-the-scenes outtakes which may be interesting for completists, but could have used some serious editing for the casual viewer. Still, it’s great to see the Priors, Campbell and Matthews talk about their experiences with the film, even if David Prior comes off as though he’s just making the movie because there seems to be a market for it.

THE DEADLIEST PREY is certainly not going to make the slow splash that DEADLY PREY did, but it does capture some of the same lightning that made the original show much fun. The 25-years-later cult movie sequel is a genuine rarity, and even if THE DEADLIEST PREY just gives a few filmmakers and fans a chance to return to something they love, that’s a good enough reason for it to exist.