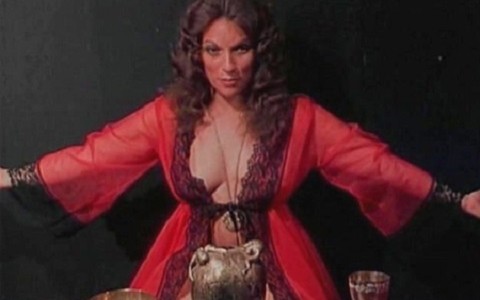 Whenever I think of the last years the iconic Edward D. Wood, Jr. spent on this Earth, I — like you, I’m sure, dear reader — can’t help but feel a deep and abiding sadness that permeates right down to the fucking core of my being. If he’d just been able to hang on for a few more years, who knows how things could have ended up for the guy? Ed passed away in 1978, and by the early 1980s he was being celebrated as “the worst filmmaker of all time” even though we all know he wasn’t/isn’t. But when he died — of heart failure brought on by years of chronic alcohol abuse — he was homeless and crashing at a friend’s place, just another Hollywood has-been who was forever dreaming up one “big comeback” after another that never materialized.

He deserved so much better, didn’t he? Think of the untold hours of joy his work has brought to a legion of fans that continues to grow to this day. Shit, it’s not hard to meet people who have watched PLAN 9 FROM OUTER SPACE alone dozens, if not hundreds, of times. How many folks would love to have had the opportunity to shake the man’s hand and just say “thank you?” I know I count myself among that number, and it’s a fair bet that if you’re reading this, you do as well.

The ’70s were by far Wood’s toughest decade to endure (evidenced by the simple fact that he didn’t endure them completely), and it’s not hard to see why — the man who gave us BRIDE OF THE MONSTER, GLEN OR GLENDA? and other singular works of celluloid vision — the man who defined the term “outsider artist” before it was even coined — was reduced to writing dime-a-piece porn novels and living in unimaginable squalor. Diving into the bottom of a bottle of Imperial Whiskey must have probably seemed like a pretty good option given the cruel hand fate had dealt him, even if his boozing only made matters (much) worse.

So let’s not hold 1971’s NECROMANIA — apparently his last film, although he wrote and directed another skin flick, THE YOUNG MARRIEDS, that same year, and which actually came first is a bit of trivia that’s been lost to the ages — against him too much, shall we? 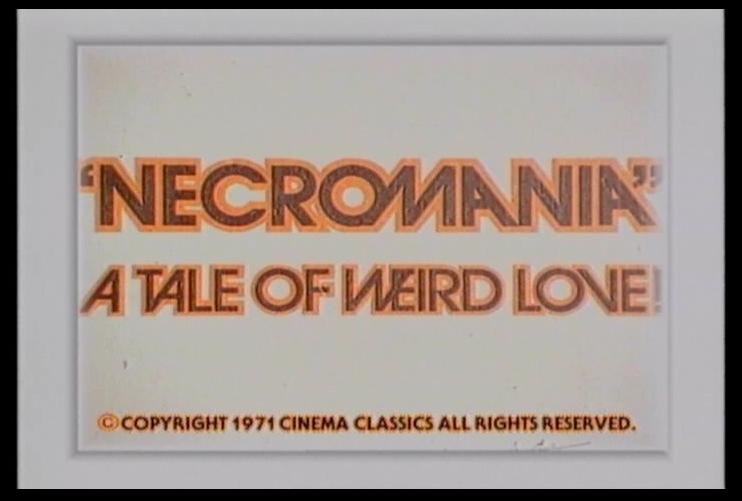 I don’t know a whole hell of a lot (okay, anything) about Cinema Classics Production, the outfit that hired Wood to helm this softcore (with hardcore inserts filmed but not added at the time) stinkbomb, but whoever was behind this one-and-done operation, they do deserve thanks for giving Ed two days and $7,000 to realize his admittedly meager vision with this flick and, hopefully, to feel at least somewhat alive again.

Anecdotes about the production of this film — whose complete title is the admittedly bizarre and grammatically incomprehensible ‘NECROMANIA: A TALE OF WEIRD LOVE!‘ — are few and far between, but according to the Bible of all things Wood, Rudolph Grey’s Nightmare of Ecstasy, Ed was positively in his element while on set. Sober, on top of his game, directing his miniscule cast with enthusiasm — hell, he even worked in drag and didn’t give a shit what anyone had to say about it. He tackled his assignment, by all accounts, with positive zeal.

Not that any of this shows in the finished product, mind you, because even by early-’70s softcore standards, NECROMANIA is an interminably dull slog. But since a breakdown of the particulars of a film’s “story” is part and parcel of any good review (or, hell, even a review written by me), here we go: a young couple, Shirley (legendary skin starlet Rene Bond, who would also go on, tragically, to drink herself to death) and Danny (Ric Lutze) are having problems in the bedroom. Specifically, Danny can’t get it up. So they do what any newlyweds in their predicament would, I guess, in the days before Viagra — visit the home of an occult practitioner of sexual magic.

Hey, that was painless, right? 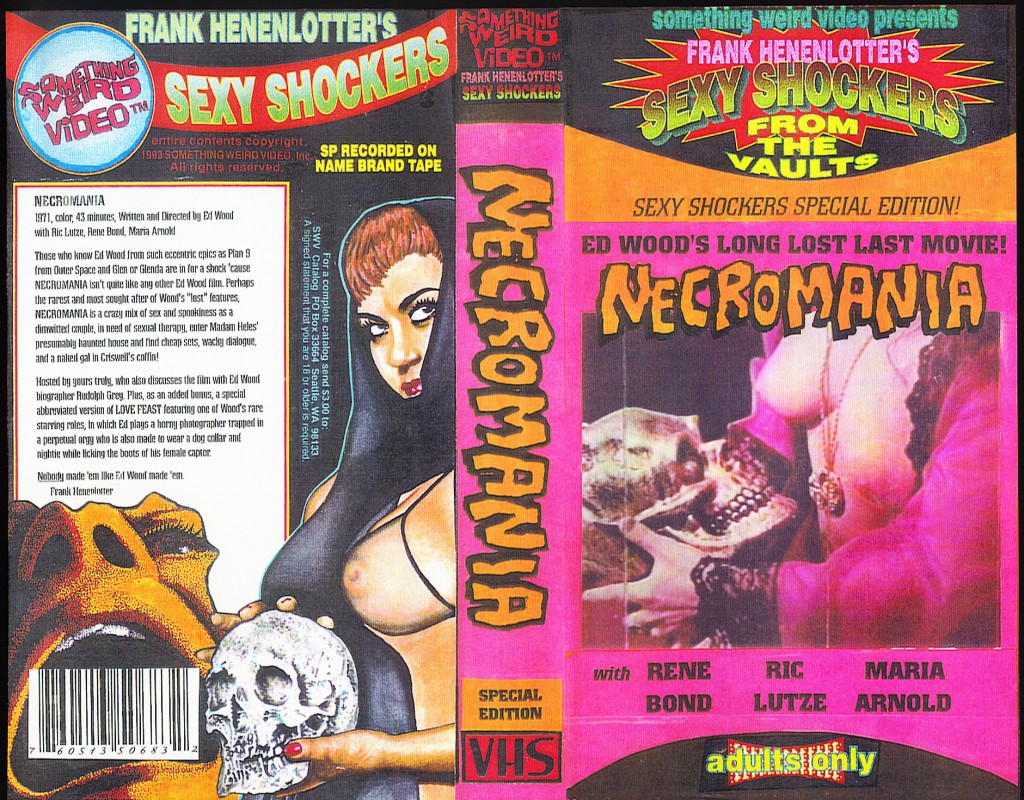 As boring as all that was to write (and no doubt to read) about, I assure you that watching it is worse — there’s nothing going on here beyond typical “point and shoot”-style filmmaking, the canned library soundtrack music is, like the “action” on screen, just kinda there, and frankly it’s impossible to imagine even the most hard-up and desperate individual finding anything to get hard and/or wet about here, even if Rene Bond is, as always, drop-dead gorgeous to look at naked. It’s all pretty below-standard stuff for a genre whose standards were, almost with exception, appallingly low to begin with.

Still, shit — it’s Wood, ya know? And even if precisely none of the director’s signature tropes were anywhere on hand, people were going to be looking for this thing like it was some kinda Holy Grail of sleaze, at least for completeness’ sake if nothing else. Until 2001, only a partial (under 60-minute) print survived, released on VHS by Something Weird Video as part of their “Frank Henenlotter’s Sexy Shockers From The Vault” series. Come 2001, however, a for-all-intents-and-purposes unedited (as far as we know) print was discovered, complete with unused hardcore footage, by aforementioned Wood biographer Rudolph Grey at, apparently, a yard sale, and this was subsequently released onto DVD by an outfit known as Fleshbot Films, who have remastered the full frame image and mono sound to what one supposes to be their best possible standards (it still looks and sounds a little rough, as you’d expect), and so now we can, in fact, see NECROMANIA in all its — and I use this term loosely — “glory.” 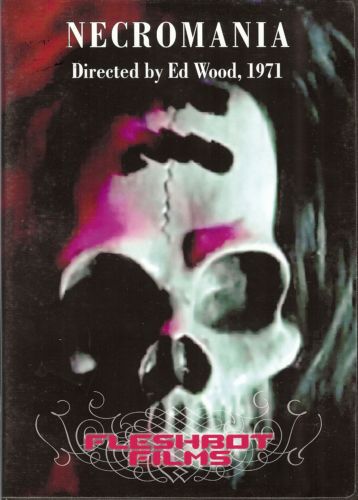 Whether one is watching either the softcore or hardcore edits available on this disc, though — and I give Fleshbot credit for presenting it either way, since one is (again, as far as we know) “complete,” while the other is the version that was seen in Kleenex-providing theaters (or at least would have been — all prints of the film quickly disappeared, and despite a few different companies being listed as “distributors” of it, whether or not it actually played on any screens anywhere is something of an open question) — the end result is the same: sheer ennui of the sort that leaves one pondering the very fundamental question of when did watching people fuck (or at least pretend to fuck) become so boring?

I can’t answer that any more than I can answer why a film that has absolutely nothing to do with having sex with the dead should be called NECROMANIA, but I do know this much: only the most die-hard of Wood completists are likely to find anything of interest here, and even for them it ain’t gonna be easy.

Wood as gender-bender in the Top 50 Gender-Bending Characters!

“Nightmare of Ecstasy” as one of the Top 50 Cult Film Books!