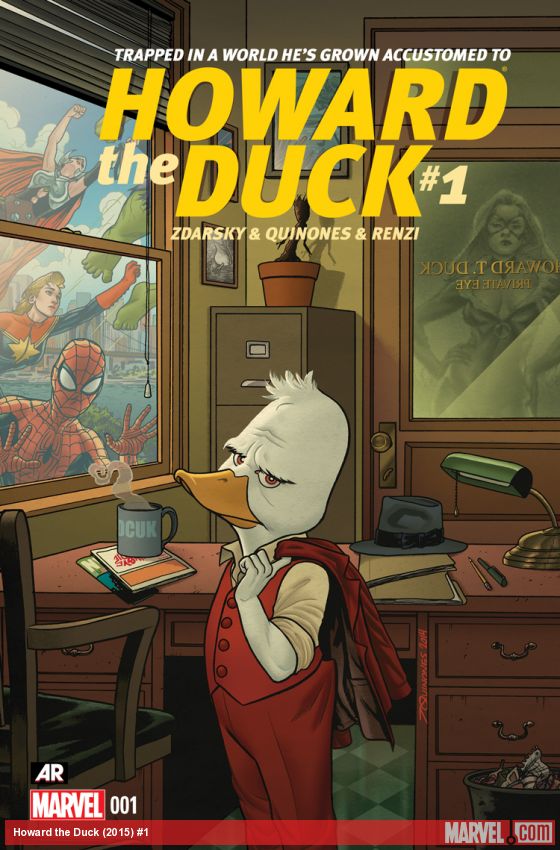 You know the old saying : if it walks like a duck, and it quacks like a duck, it must be — well, a duck. And there’s no doubt that the first issue of Marvel’s new Howard The Duck monthly definitely features a walking, talking,  intelligent, permanently-down-on-his-luck duck from another planet, which is — at least on paper — exactly what Howard is and always has been. But he’s also a lot more than that, and that’s what makes Howard The Duck #1 so much less.

Truth be told, what made Howard such an instant overnight sensation in the 1970s is the simple fact that he was nothing more than a conduit for the social, political, and philosophical observations of his co-creator, legendary comic book scribe Steve Gerber (who later became involved in a protracted legal struggle against Marvel for ownership of the character). Howard’s other creator, artist Val Mayerik, left the building much earlier than Gerber did, but the duck “trapped in a world he never made” continued on reasonably well without him. Once Steve was out of the picture, though, the character never recovered — and certainly never sounded quite right ever again.

Which isn’t to say that the new creative team of writer Chip Zdarsky (best known for his work as the artist on Image Comics’ hugely popular and successful, Matt Fraction-penned Sex Criminals), penciller/inker Joe Quinones, and colorist Rico Renzi don’t give a solid effort here — it’s just that their hands are completely tied, and they’re stuck in a “no-win” situation. When Disney bought Marvel, one of the first things they did was dictate numerous changes to Howard’s physical appearance, feeling that he looked a bit too similar to another famous duck that was the property of the House of the Mouse (Gerber himself responded to these mandates by turning the character into a rat for nearly the entire duration of the 2002 six-part series from Marvel’s since-shuttered “mature readers” imprint, Max Comics, that represented his final go-’round with his signature creation), and now what we’re stuck with is an iteration of Howard that doesn’t look, feel, or sound anything like what we’re used to — and on top of that Marvel editorial seems to have decided that the story fans purportedly “want” to see in these pages is one that explains how a duck-turned-private eye ended up in the possession of The Collector at the end of the GUARDIANS OF THE GALAXY film. 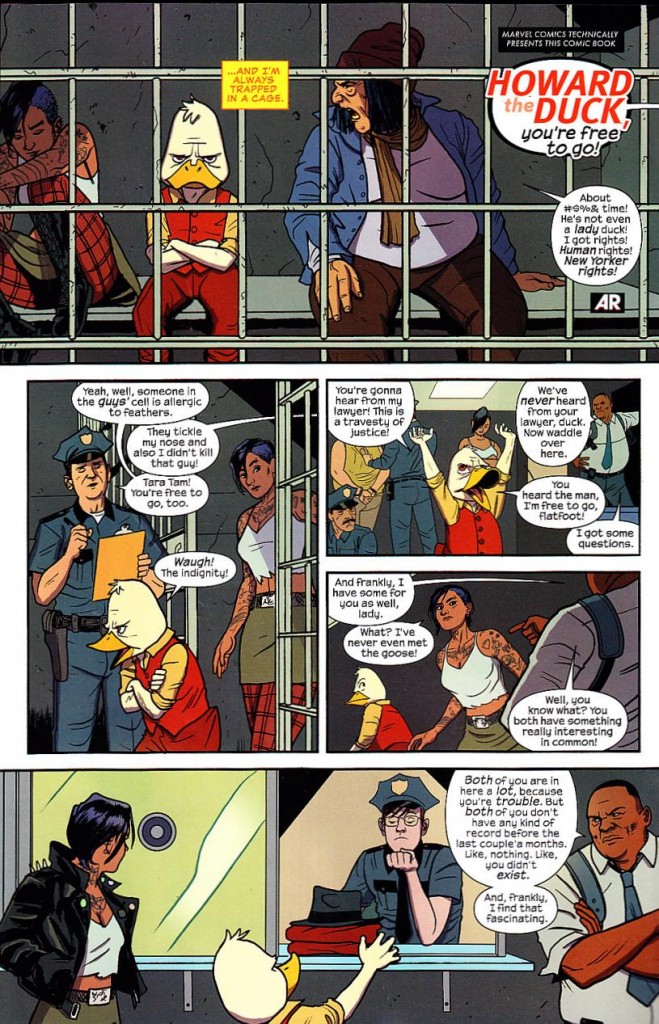 To that end, the main thrust of Zdarsky and Quinones’ debut installment is taken up with getting us from point “A” — Howard in a New York jail cell — to point “B,” which is Howard in an outer space jail cell. He picks up a new human female sidekick along the way (longtime love interest Beverly apparently being out of the picture now), and has some reasonably entertaining run-ins with both The Black Cat and Spider-Man (in fact, Zdarsky scripts the out-and-out funniest Spidey scene in years), but all this manages to do is showcase how much better a handle the creators have on their guest stars than on their actual protagonist. Howard always bitched about his sorry lot in life, and does plenty of that here, but he was at his best when waxing existential on the utter pointlessness of life in general, and that’s an element that his “kinder, gentler” 2015 version is sorely lacking (along with his former trademark cheap cigar). 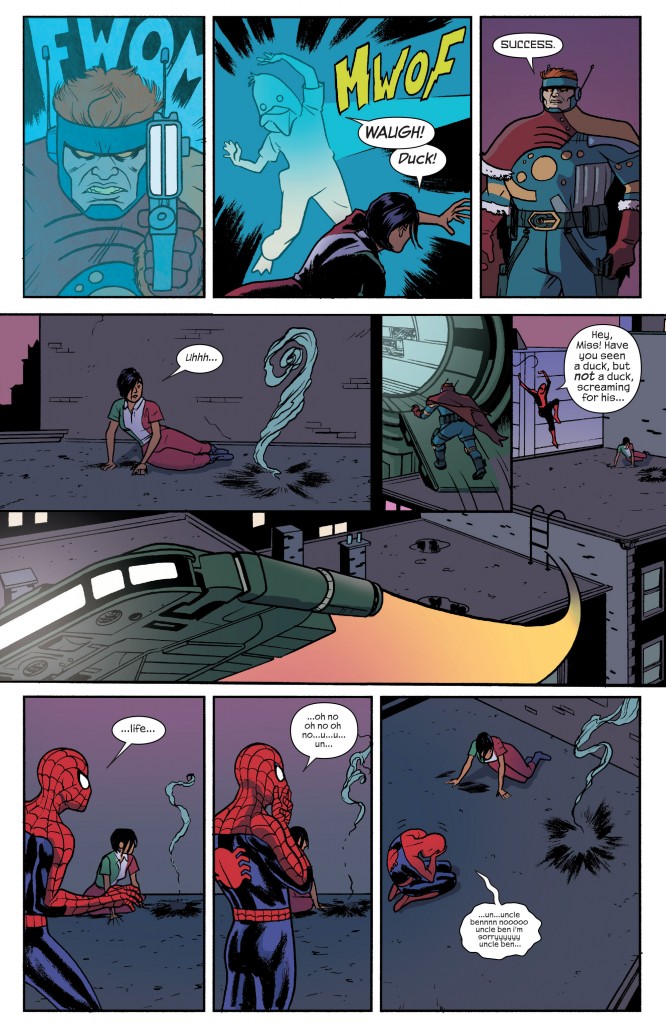 A rather forced “montage” scene  at the exact halfway point of the book (as depicted on the page below) doesn’t help matters any, either, and while I certainly commend Marvel for being willing to roll the dice on “quirky” fare in a way that their Distinguished Competition seem to be shying away from in the advent of their “New 52” relaunch (although that may be changing when DC rolls out a host of new titles in June), it seems like the commercial failure of more “off-beat” recent series like She-Hulk (who re-emerges as a supporting player in this very book) and the criminally under-appreciated Superior Foes Of Spider-Man is giving the publisher something of a case of cold feet. They apparently want to continue to try to push the envelope in a more humorous direction, but they’re just not willing to go quite as far as they were a year or two back, with the end result being a re-launched Howard title that feels like it’s very tightly controlled by editorial. 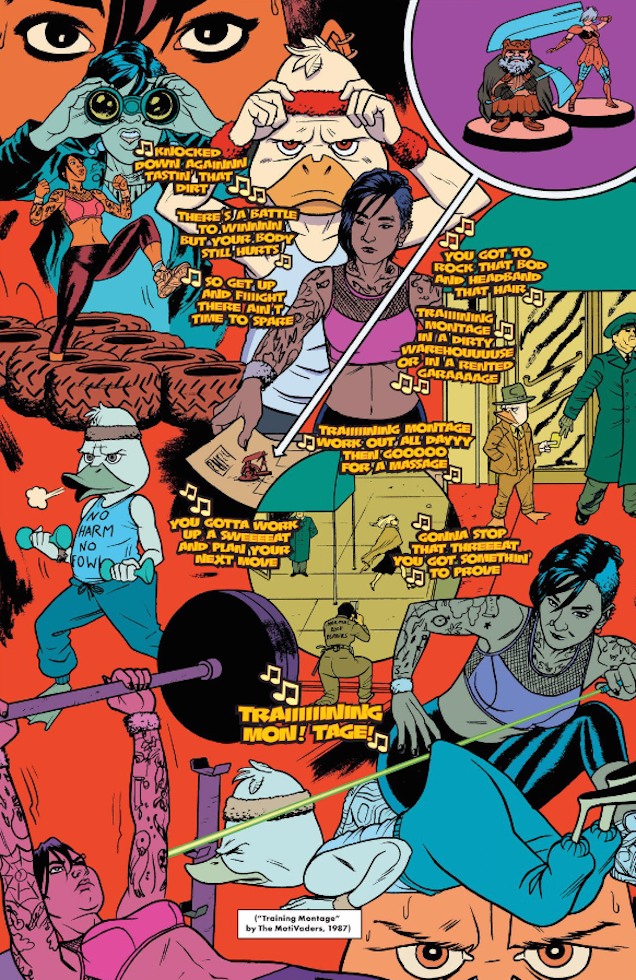 Does it have its moments? Sure, absolutely. And it’s well-drawn (and colored) throughout. A reader who’s brand new to the character — as in, one who hasn’t even seen the George Lucas-produced movie, much less read the original comics — and who is primarily interested in answering the question “who was that crazy duck guy at the end of GUARDIANS OF THE GALAXY?” might, indeed, find  a fair amount to like here. But for anyone else with even a passing knowledge of who Howard is (or at least who he used to be)and what he’s (or, again, was) all about, this first issue offers no reason to stick around for the second and beyond. If Marvel wants to have an anthropomorphic “funny animal” character other than Rocket Raccoon and Squirrel Girl as an active part of their universe, they should just let Zdarsky and Quinones — who would probably be up to the task — create a new one. It’s not simply a case that Howard without Steve Gerber isn’t Howard — it’s that he flat-out can’t be.