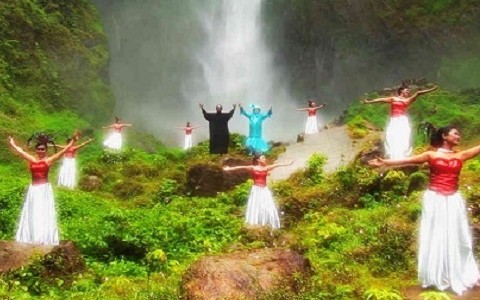 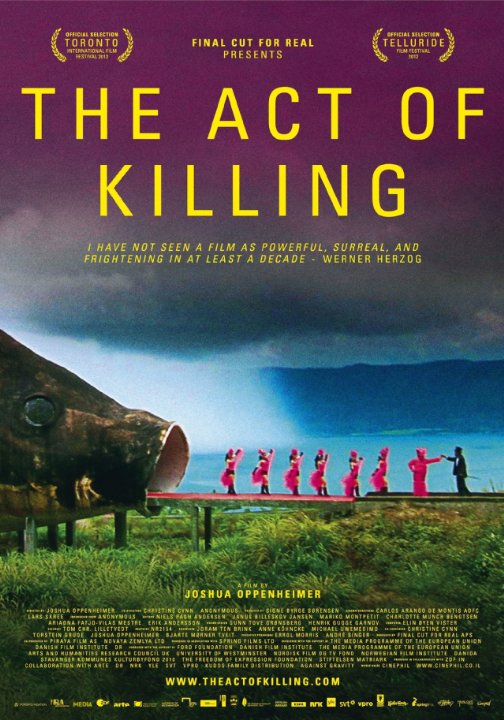 I saw THE ACT OF KILLING five months ago and have been struggling that long to find the right words to encapsulate the experience, which involved an emotional reaction which makes reviewing the film in any conventional objective sense impossible. THE ACT OF KILLING is about many things all at once: life, death, violence, history, and cinema itself. Where does one start? And once one starts, how does one stop?

This is a movie about the Indonesian death squads of the 1960s and how their actions affected the Indonesia of today. The film’s central figure, Anwar Congo, now resembles a kindly old man. He looks a bit like Nelson Mandela, quite frankly. He is surrounded by adoring and attentive grandchildren and great-grandchildren, enjoys local celebrity status, and seems never to be without company. He is also a gangster who was employed by government officials in the mid-1960s to decimate the Communist Party at the time. Anwar Congo is an admitted mass-murderer, who personally killed many hundreds of people. In THE ACT OF KILLING, you will get to see Anwar Congo pantomime his preferred method of garroting a prisoner to death — he employs one of the many yes-men who still cluster around him as a floor model. In a perverse twist, Anwar Congo is the most relatable figure you will meet in THE ACT OF KILLING. He’s the only one who shows the least bit of self-awareness, if not remorse, at what he’s done.

After the mass-killings of the 1960s, President Suharto took a three-decade-long grip over Indonesia. His administration, known as the “New Order,” was a military dictatorship which led to the creation of a paramilitary organization known as the Pancasila Youth, some of whose members also make frightening appearances in THE ACT OF KILLING. They dress in flame-colored uniforms and regard Anwar Congo and his associates as heroes. One of their number is filmed as he chuckles while describing his methods of raping teenage girls. 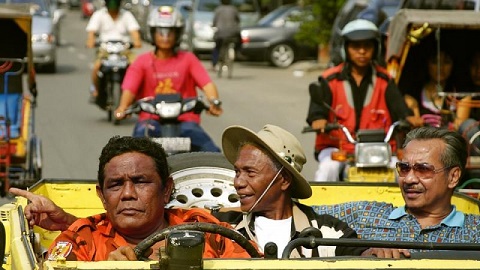 THE ACT OF KILLING is a documentary that affords a snapshot of actual mass-murderers who have gone unpunished for their ghastly crimes. Most are unrepentant, even proud, surrounded by acolytles who listen eagerly to stories of the good old days. The controversial mechanism unique to this documentary is that director Joshua Oppenheimer and his collaborators, with their astounding access to these subjects, let the old gangsters run with the idea of putting on a show. They go on to re-enact their actions of decades earlier in a film-within-a-film, one which the killers have written and designed themselves. It’s an insane, absurdist premise, worthy of DR. STRANGELOVE, yet here it is. This is real. This really happened. 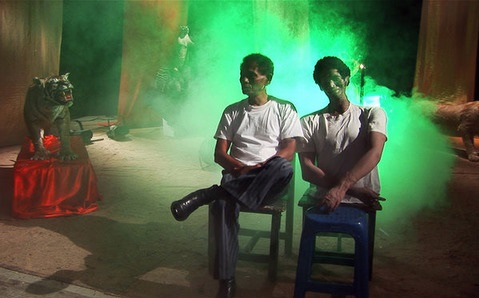 Anwar Congo, who claims he suffers from florid nightmares, has his stock company recreate those nightmares with garish and genuinely disturbing costuming. More disturbing is his contemporary, who claims to have slept well for years. That guy, whose name is Adi Zulkadry, is shown on a shopping trip to the mall with his blithe wife and daughter, in a haunting side scene. The gangsters’ film production includes an outsized, bizarre musical number, with Herman Koto, the most outwardly grotesque and obese member of their retinue appearing in full drag without an apparent care in the world. 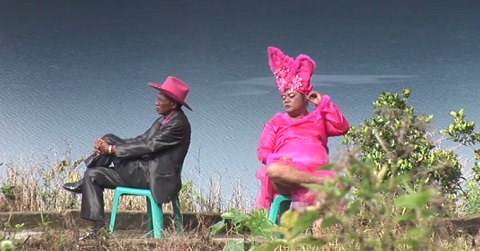 Where THE ACT OF KILLING eventually leads is to an all-out recreation of the mass killings, where the gangsters act out the murders they actually committed years before. A family member of one of the victims, a neighbor of Anwar Congo, becomes a participant in the production. By the time these scenes roll around, it’s possible the documentary’s audience is already feeling pummeled and defeated. I know I did. The actual climax of the documentary is in a long, unflinching scene where Anwar Congo returns to the killing floor where he committed so many atrocities. The camera holds on this slender, white-haired man as he retches and dry-heaves for what feels like an interminable amount of time. His nightmares have caught up with him, or by revisiting them he has made them worse. Either way, the moment eventually does pass, and he leaves the building. No one ever comes to arrest Anwar Congo. 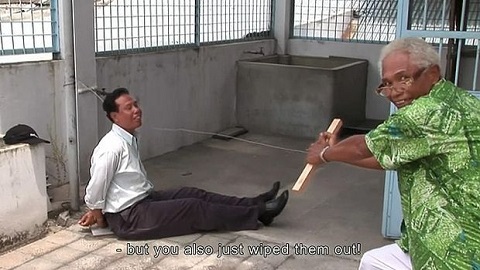 Certainly, THE ACT OF KILLING is as much a meta-commentary on the act of movie-making as it is a legitimate political and historical document. The film has received near-universal acclaim as it’s been touring the world. To my mind, the film-making here — on the part of Joshua Oppenheimer and his team, not Anwar Congo and his — is exemplary and unassailable; soberly composed, edited, and presented in an objective fashion that is almost unimaginable to me as a hot-tempered ugly-American. The documentary camera doesn’t judge these avowed criminals, but instead leaves it to us, the audience. 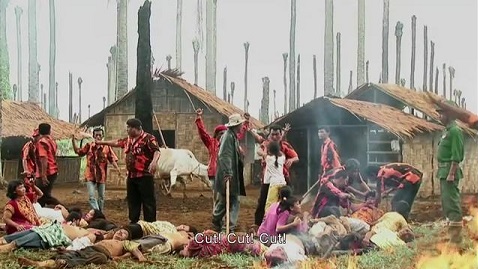 And if we can’t judge these men, who can we judge? They committed mortal sin, over and over again, and have literally fattened themselves off the spoils. These are not sophisticated men, without a doubt: They’re brutes. You don’t call upon poets and playwrights to carry out your genocidal agenda. These are animals at best; monsters at worst. By all appearances, the subjects of THE ACT OF KILLING, almost to a man, are untroubled by conscience. Some of them seem to be sociopaths. A few seem to be psychopaths. Again, these are my own conclusions. I don’t think I was directed to feel this way by the documentarians. they just set the cameras up and let the devils implicate themselves. Admirably, the filmmakers have somehow resisted the urge to color their gaze with subjectivity — the pseudo-documentary style of a movie like CAPTAIN PHILLIPS, by contrast, is far more biased — opting instead to let the premise and the subjects define the narrative. 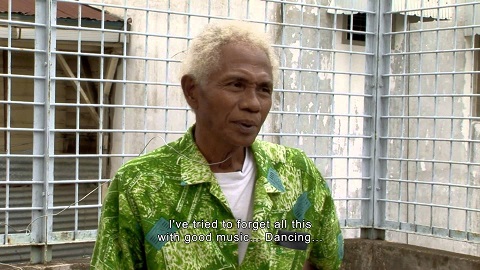 There have been some objections raised to THE ACT OF KILLING, such as this well-reasoned example, but those tend to zone in on the moral questions raised by the film’s methodology: In terms of craft, few would argue this film is anything other than impressive. In my opinion, THE ACT OF KILLING is valuable as a moral document, but the questions are worth raising. Does the film glorify its subjects? By measure of my personal reaction thus far, the obvious answer would be no, but look at the smiles on those fattened gangster faces: Some of them sure feel glorified. Another valid perspective to consider is the exotic nature of the subject matter: Many Americans of my generation, myself included, are entirely unfamiliar with Indonesia and its history. I had read about the killings earlier this year by chance, while researching this piece of all things, but that was the first I’d ever known. As hard as it was for me to watch THE ACT OF KILLING, there was still a measure of distance. I don’t know any Indonesians. 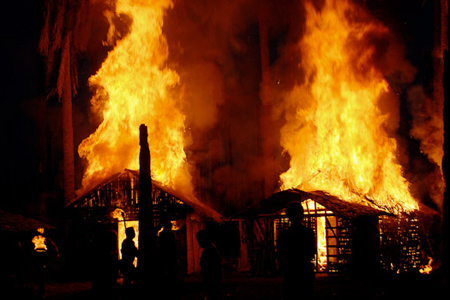 But what if THE ACT OF KILLING had hit closer to home? What if a documentary crew had found some ancient unrepentant Gestapo officers and encouraged them to make a musical about what they did at Dachau? I’d be outraged. THE ACT OF KILLING has several moments of the very blackest humor, but if I had more of a personal connection to the events described onscreen, those would have been lost on me. I’m having this argument with myself here, because I am a champion of THE ACT OF KILLING, which is probably one of the most viscerally affecting movies of the last several years, but I don’t want to dismiss any opposing viewpoints out of hand. The fact that it prompts such soul-searching and moral self-questioning would indicate that it does indeed have value. Whichever way you end up feeling about what you’ve seen, you probably owe it to yourself to see it in the first place.

THE ACT OF KILLING is now available on DVD and on demand, but it is still playing theatrically in New York City at Cinema Village. Tonight, Thursday January 9th, director Joshua Oppenheimer will appear in person at the 6:20pm show to address any of the many questions this movie invariably provokes.