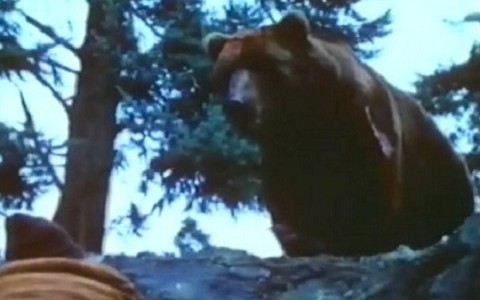 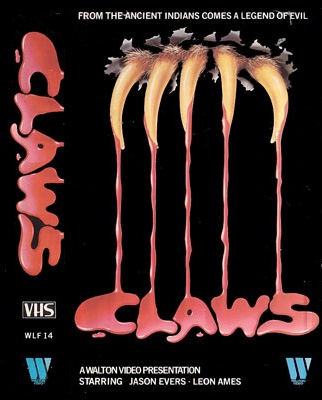 According to some, we are in an era of unparalleled stupidity in American filmmaking. Remakes and sequels have become the order of the day; when studios venture outside of film for their inspiration, they rarely go farther than the comic book industry, giving audiences the illusion of choice between multiple urban superhero films. And yet, for all the failings of modern cinema, at least it has never produced a story like CLAWS, a movie with a lack of originality that goes two dreams down, but one that is of vital importance to Alaskan film fans. 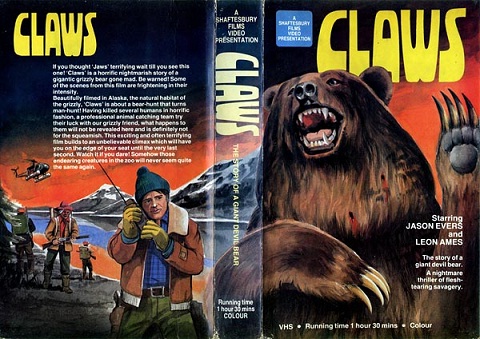 In 1976, America was finally making their way back to the beaches after the success of Stephen Spielberg’s 1975 smash hit JAWS. Hollywood saw a demand for more animal horror films and, like Noah before it, rushed to fill that demand with two of every kind. This meant two of every insect — THE BEES and THE SWARM in 1978 — two of every sea creature — TENTACLES and ORCA in 1977 — and yes, two of every type of bear. Screenwriters Harvey Flaxman and David Shelton, alongside director William Girdler, made GRIZZLY in 1976 with every intention of capitalizing on America’s fascination with survival movies; even the tagline for the film, “The most dangerous jaws in the land,” was a not-so subtle nod to audiences that their expectations would be met head-on. 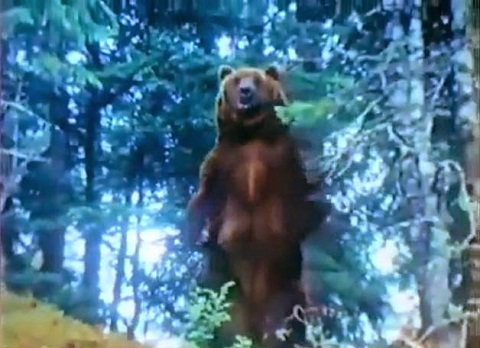 GRIZZLY would become a true success for independently-produced films, setting a box office record of $39 million that would last until John Carpenter’s HALLOWEEN broke it in 1978. The 1977 release CLAWS, another animal horror film starring a giant bear, would be rereleased in 1978 in several countries as GRIZZLY 2. Thus a film attempting to mimic another film — which was in and of itself an attempt to recreate JAWS — was not deemed worthy of keeping its original name. Imagine if DEEP IMPACT had been rereleased as ARMAGGEDON II, or THE ILLUSIONIST billed as THE PRESTIGER; this was the ‘70s equivalent of the mock-busters produced by The Asylum, a production company whose business model is concentrated around the ignorance of video store customers. 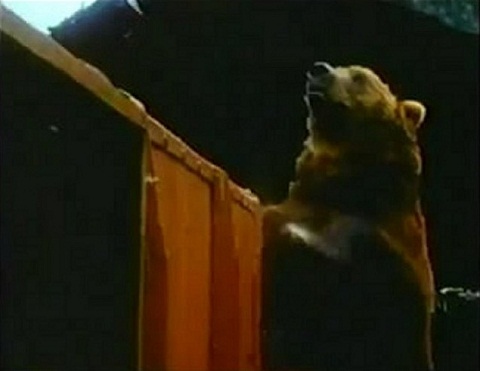 And while I won’t argue that CLAWS should get much in the way of critical recognition, there are good reasons why the film should be remembered fondly. Despite its status as the capital of Alaska and one of the most beautiful cities in the United States, my hometown of Juneau, Alaska has never been a hotbed for cinema. Visit the city today and you will find two Blockbuster Videos, still open seven days a week and virtually indistinguishable from their prolonged success in the 1990s. The most exciting thing to happen to Juneau was when Bill Gates invited his celebrity friends on an Alaskan cruise, flooding the small town with more actors and filmmakers than they had ever seen before. And while the highest-profile film to feature footage from Juneau may be John Carpenter’s THE THING — notably, the ice field at the beginning of the movie — CLAWS is one of the few films to be shot entirely within Southeast Alaska. 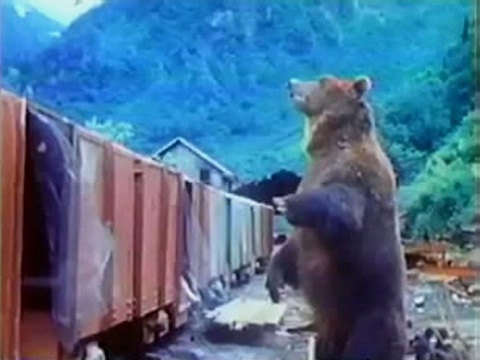 CLAWS is a mishmash of most of the popular genre tropes at the time. The film opens on a group of illegal hunters opening fire on two wrestling bears. One bear drops immediately; seventeen shots later, the second bear goes lumbering into the woods, suffering from only mild wounds. Realizing the danger of a wounded bear, the hunting guide tells the group to immediately return to their cabin; thus the bear stumbles across a local logger (Jason Evers) instead of the poachers and mauls him to within an inch of his life. 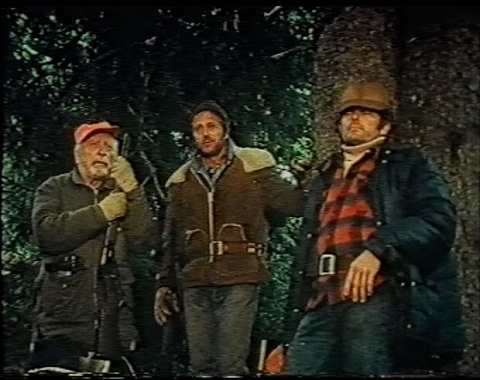 Normally, a wounded bear with no fear of humans is a cause for concern in Juneau. However, as Evers’s Jason Monroe recovers in a hospital room, a title card informs us that this wounded bear has continued to kill hikers and hunters in the woods surrounding the city. Seven attacks occur over a time period of five years; when the movie finally fades back in, we are shown a Jason Monroe who suffers from constant traumatic flashbacks. His wife, Kris (Carla Layton), has left him for another man (Anthony Caruso, an actor in ‘40s and ‘50s noir such as THE CONCRETE JUNGLE) and Monroe wakes himself up screaming every night and clenching his stiff left arm. Monroe’s only source of comfort in the world is his Native Alaskan friend Howard (Glenn Sipes) and his son Buck Monroe (played by the appropriately-named Buck Monroe, who according to IMDB also somehow starred in DEADLINE almost thirty years prior to CLAWS). After Buck is seriously injured in the most recent bear attack, the Forest Commissioner (Leon Ames, playing a character with a make-believe title) enlists the help of both Monroe and his ex-wife’s lover to try and track the bear down.

If I were to make a list of the movie clichés I find most exasperating, then CLAWS would aim high by incorporating the three at the top of my list. The first is the incredibly outdated—and fairly offensive—characterization of Howard as ‘the Noble Savage.’ Howard’s friendship with Monroe is poorly motivated; at one point, Monroe describes a Native friend as someone who will follow you into hell, implying that Howard has some kind of Wookie-esque life debt in place with Monroe. Howard also perpetuates some of the worst stereotypes related to Native Alaskan culture, attempting to alleviate Monroe’s guilt over his son’s injury through alcohol. “I think I go drink whiskey. You come drink whiskey too.” By the time alcoholism has reared its ugly head, we have almost forgotten about Howard’s obligatory broken English. 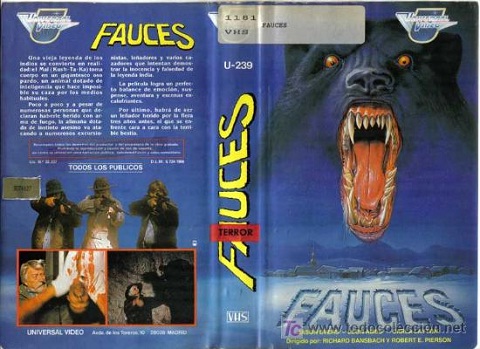 In keeping with the nobility of ‘the Noble Savage,’ Howard is also the only one to consider that the bear may be more than just a bear. Many times he refers to the grizzly as a kushtaka, a demon of Native Alaskan legend that is capable of changing skins. CLAWS waits 63 minutes to explain the translation behind kushtaka; while I was ecstatic to see my favorite Alaskan legend appear in film, the film butchers the mythology behind the creature, forgoing the eternal capture of souls for the less-impressive ability to attack randomly from off-camera. Howard ultimately begins to hallucinate his dead ancestors and wanders away from his camp, walking with open arms towards his tribal chief until he slowly fades into the killer grizzly. Whatever points CLAWS gained in casting an actual Native American in the role is negated by every single thing he does while he is on the screen. 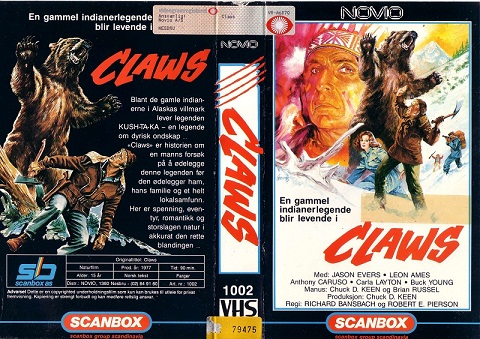 The second cliché is that of the educated outside helpers—see Richard Dreyfuss in JAWS—who are revealed to be completely inept due to a lack of respect for nature. Two college students fly to Alaska and request an opportunity to capture the bear alive. They have brought with them a giant metal cage and promise the Forest Commissioner that their infrared sensors will allow them to track the bear all the way into captivity. While the commissioner is skeptical of their technology, this is a technique they have used to capture man-eating animals in Africa and South America. So it surprises absolutely no one when, ten minutes later, their technology has failed and a gigantic grizzly breaks through the window of their cabin to devour them whole. I had high hopes for these two characters; a hippie Caucasian and a radical African American searching for a killer Alaskan bear was an engaging idea for a buddy comedy, and I silently willed the movie to change course midstream (to no available). 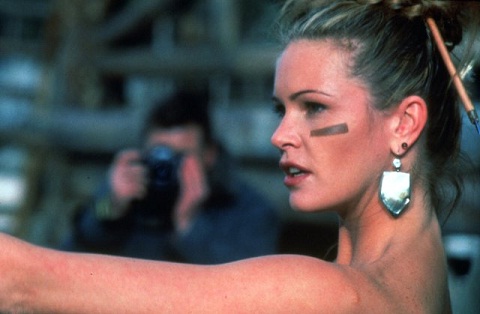 The last cliché is that of the love triangle. Monroe and Kris have all the history, but every time they share the screen they are either threatening or accusing the other person of putting young Buck in harm’s way. Henry seems to genuinely care about Kris and Buck and have their best interests at heart, so it is little surprise that he dies in the woods and is never spoken of again for the rest of the movie. At least THE EDGE had a shot where Elle Macpherson’s character mourned the death of Alec Baldwin; for a time, it appears that Henry may be the real lead of the film, but he only serves as a motive for Monroe to get back on the horse. The grizzly pushes over a tree that Henry is hiding in, but that is not what kills him; instead, Henry dies from a slow-motion off-screen attack while wandering around in a daze, wondering where the bear went. Henry had every reason to want the bear dead and, unlike Monroe, did not wait five years and over two-dozen deaths to find his motivation. He will always be the lead of CLAWS in my heart. 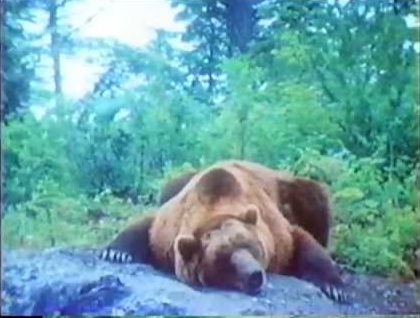 What works in CLAWS is its location shoots and impressive array of stock footage. Every two scenes in the film require a transitory shot of local wildlife; as Monroe and his hunters track the bear, our screen is filled with bears, moose, wolves, lynx, beavers, rams, goats, and eagles, many of which are not technically indigenous to Juneau. Even in New York I am tickled when I recognize locations on film, so it was a real treat to see places in CLAWS that I had frequented in my youth. Many of the scenes are shot along the shoreline of Mendenhall Lake, a tourist hotspot at the foot of the Mendenhall Glacier with easy road access. Even a few of the interior scenes were shot at places like Bartlett Memorial Hospital or the Juneau Police Department. What little lizard intelligence the movie demonstrates goes entirely towards its usage of location, and CLAWS delivers more beautiful shots of Juneau scenery than any film before or since. 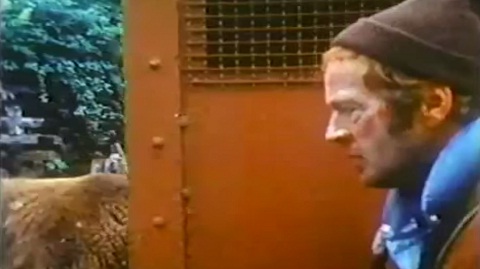 And there is also the unnamed bear that plays the grizzly. Monty Cox, who served as a bear trainer in both CLAWS and GRIZZLY and as a stuntman for LETHAL WEAPON and DIE HARD 2, works wonders with his animal ward, allowing the filmmakers to take the bear on location and shoot several scenes with grizzly attacks in the wild. CLAWS elevates its bland material by not simply cross-cutting bear footage with puppetry; there are multiple occasions where we see the lead actor, the bear, and scenery markers in the same frame. If it is true that we can pull one great shot from any film, then the above image—blurry as it may be—serves as the one moment of inarguable greatness for the cast and crew. Every time the grizzly rears back or sprints across the forest, we are reminded of the immense physical space that the creature occupies. For all its faults, CLAWS reminds viewers why grizzly bears are the apex predator in Southeast Alaska. 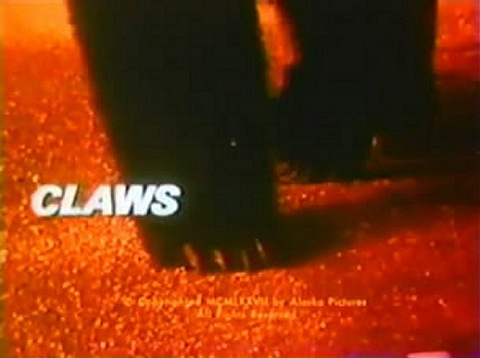 Can CLAWS be both a terribly unoriginal movie and an important milestone in the history of Alaskan cinema? A few days ago, I was talking to my girlfriend about the importance of VHS collectors. Many films produced in the ‘70s and ‘80s only exist in an outdated format. While not all films are worth including in the annals of film history, every film has a reason for existing, as it not only secures a life’s work for future generations but also provides a bit of context to an era of filmmaking. CLAWS may be a double derivative of the original JAWS film, but that fact alone helps us understand the impact of Spielberg’s original film. Between this context and the role CLAWS played in bringing the movie industry to Alaska, I sincerely hope that some unnamed shelf holds a VHS copy of CLAWS in its original packaging. I would be more than happy to take it off your hands. 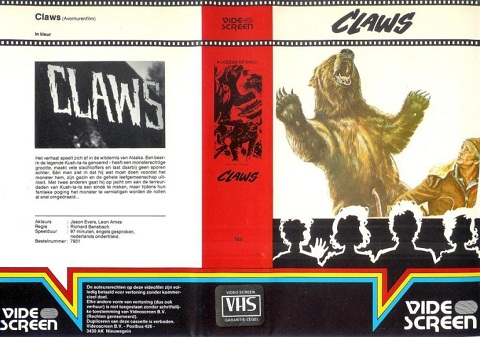