DUDE.  Remember TITANIC? Not the actual ship but the movie? Don’t act like you haven’t seen it. WE HAVE ALL SEEN IT. Some of you know the movie word for word. Some of you may have cried watching it (hahhah… losers). Some of you may have lip synched to “My Heart Will Go On” while staring into your bedroom mirror (…sad). And y’all have TOTALLY wished Leonardo DiCaprio would drink poison for you while wearing a tacky Hawaiian shirt…WAIT. Was that in TITANIC? Am I confusing my Leo flicks? I just keep seeing Claire Danes terrible cry-face and hearing Celine Dion. ugh SO GROSS! I’m getting depressed thinking about it and wished Jordan Catalano would just make out with her in the boiler room and make it stop. Ok. My ’90s tangent is done. Let’s loop back around. TITANIC. The movie was alright. But while all these chicks were pulling for Kate Winslet to get with Leo, I was cheering for that asshole Billy Zane. Yes. You know what I’m talking about. Who cares if he was a complete shit in that movie? I can see past his bad personality and see what truly matters. That he’s a total fox. I’ve been hooked ever since. Which bring me, kiddies, to my VHS flick of the night. NO. Not TITANIC. That shit is too long and my VCR would never make it. No, no, no, TONIGHT not only will we be ogling the Zane but another teen heartthrob. Yep, you guessed it! The Cryptkeeper! Squeaaaaal! Glad I shaved my legs! Boils and Ghouls, let’s talk about DEMON KNIGHT!

SPOILER ALERT. BECAUSE YOU KNOW HOW I DO: So DEMON KNIGHT is about this guy name Brayker who is running away from this mysterious dude with a wrestler’s name. The Collector (such a good name) is trying to get a magical blood-filled key way from Brayker. They get into this gnarly car crash and Brayker gets away. He ends up hiding out in a makeshift motel/church thingy with Dick Miller, Jada Pinkett Smith, a prostitute, and some other people that are going to be killed.  The guy from Wings shows up to have sexy times with Cordelia (the prostitute) and tells them that someone tried stealing his friend’s car. It was Brayker. No one knows that it was him but Irene has a sneaky feeling and alerts the cops. The sheriffs are investigating the car crash and are there with The Collector. He accompanies the cops to the motel claiming Brayker has something of his. They find the key but before he gets away with it, the cops get a call or something that both cars involved in the crash were stolen and they attempt to arrest him and Brayker. Big mistake. All hell breaks loose and Billy Zane is actually an even bigger asshole in this than he is in TITANIC! He jumps out a window to get away from the key but then unleashes a bunch of demons!  There is stuff about Jesus and blood and basically everyone dies except Jada Pinkett Smith. The End.

AAAAH How great is this trailer?!:

I remember the first time seeing this and how surprised I was at how gory and incredible the special effects were! These demons still look bad ass almost 20 years later! 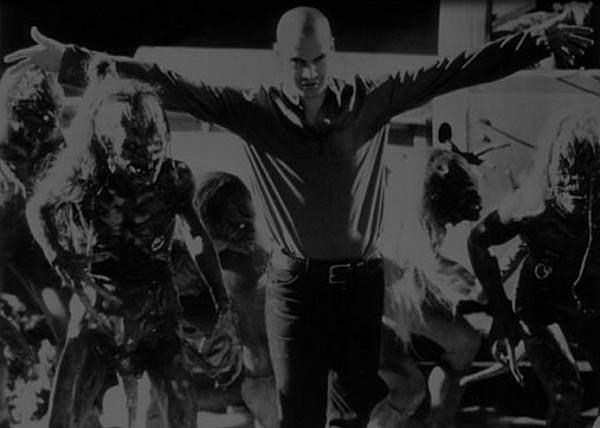 1. Don’t let your nipples smoke. It’s bad for their health.

2. Dick Miller will always be the man. Seriously.

3. Jada Pinkett Smith is a serious bad ass and if there ever was an army of demons to battle against, I would want this chick at my side. Blood spitting and all.

Why TALES FROM THE CRYPT: DEMON KNIGHT wins the battle:

It’s definitely one of the best in the ’90s horror genre. The soundtrack (filter!), the cast, the acting! Bloody, gooey, slimy, and with just the right amount of cheese, this is such a great first date movie! And, well, if the date sucks, at least you have this to look at: