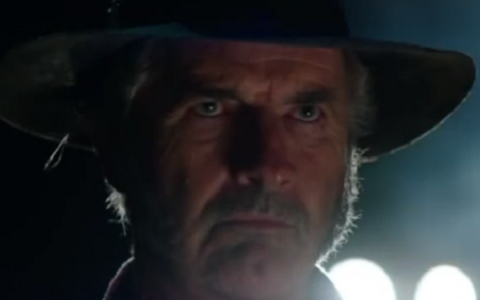 Greg Mclean’s 2005 film WOLF CREEK made a big impression on horror audiences with its relentless brutality. Essentially a TEXAS CHAIN SAW MASSACRE-alike set in the desolate Australian Outback, WOLF CREEK was undoubtedly successful in generating unease. Roger Ebert famously gave the film a scathing review, claiming the film had but a single purpose: “To establish the commercial credentials of its director by showing his skill at depicting the brutal tracking, torture and mutilation of screaming young women.” Naturally, many horror fans loved the film, and it has become something of a modern classic. Mclean’s follow-up film, the underrated giant crocodile thriller ROGUE, did not make as big a splash as WOLF CREEK. This may well be why we now have WOLF CREEK 2, finally seeing a U.S. release the better part of a decade after the original’s stateside release. Perhaps unsurprisingly, this new chapter in the story of Outback madman Mick Taylor (John Jarratt) is reminiscent of another infamous horror sequel: THE TEXAS CHAINSAW MASSACRE 2.

The film actually opens with the exact same title cards displayed at the beginning of the first film. Following this, a pair of unsuspecting police officers pull Mick over for speeding, not because he was actually speeding but because they’re bored. This goes about as well as anyone who has seen the first film would guess, and then we’re introduced to a couple of German backpackers making their way across Australia. Katarina (Shannon Ashlyn) and Rutger (Phillippe Klaus) are hitchhiking to the Wolf Creek crater, but become stranded in the park when they can’t find a ride back to the nearest town. That night, they are visited by Mick, and soon Katarina finds herself running blind through the countryside with Mick in hot pursuit. She stumbles onto a roadway and flags down a car driven by Paul (Ryan Corr), who helps Katarina at the cost of becoming Mick’s next target.

Katarina and Rutger’s trek and run-in with Mick is strongly reminiscent of the original WOLF CREEK and all its ilk, but Mclean seems less interested in making another Outback stalk ‘n slash than in punishing the audience. Like Tobe Hooper’s sequel to CHAIN SAW, WOLF CREEK 2 amps up the first film’s brutality but expands the scope. Both films seem to revel in sheer unpleasantness for its own sake, giving the audience more of what they presumably wanted in a sequel to such a gruesome, difficult film. It also shares the same streak of nihilistic, jet-black humor, leaning hard on obvious soundtracking (Patsy Cline’s “I Fall to Pieces” plays while one character is completely dismembered) and lengthy car chases that go in unexpected directions. One particular sequence featuring an 18-wheeler and a lot of very unfortunate kangaroos will either have viewers cracking up or reaching for the remote.

Perhaps the biggest change is that now that we get to spend more time with Mick, he becomes a caricature of what he was in the first film. Obsessed with humiliating and murdering foreigners who dare to set foot in his country, Mick talks constantly and steamrolls through more than enough people to draw attention to himself in his pursuit of Katarina and Paul. By the time he’s lulled into singing a rendition of “Tie Me Kangaroo Down,” it’s tough not to miss the relative restraint used by Mclean and Jarratt in the first film. It’s not as though Mick was a nice guy in WOLF CREEK, but he at least wasn’t late-era Freddy Krueger, mugging and winking while he guts, shoots or runs over everybody who crosses his path. At least the beautiful cinematography gives us some gorgeous scenery to look at every so often as the occasional reprieve from Mick’s nonstop chatter.

WOLF CREEK 2 is a textbook case of much, much, MUCH more actually being less. Like THE TEXAS CHAINSAW MASSACRE 2, its constant violence is numbing and exhausting, its larger budget going mostly to making Mick a Terminator-level force of destruction and paying for those awful soundtrack choices, as well as a labyrinth of underground tunnels (some of which actually appear to be lifted directly from CHAINSAW 2!). Running at a mind-numbing 106 minutes and ending with a hugely anticlimactic middle finger, WOLF CREEK 2 is one of the nastiest horror sequels in recent memory, on a number of levels.

WOLF CREEK 2 is now available on VOD, and will have a limited theatrical release in May.