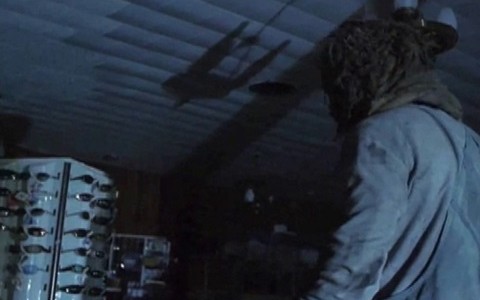 Sometimes it seems like 3/4 of all the films I cover in this column are throwback slasher flicks.

Not that I’m complaining, mind you. While the genre has never been a personal favorite, the structure it presents is reliably entertaining, and it’s historically been a fine place for young filmmakers to ply their trade – and test their skills. Even when it’s just the cheap thrills inherent in seeing cardboard characters get sliced to ribbons, I can still dig it. Especially when it’s paired with a certain flare behind the camera.

While gleefully embracing the cliches (and limitations) of the genre, Cary Hill’s SCREAM PARK manages to occasionally rise above predictability thanks to a fun setting and a game cast – including some familiar names. While it’s hardly the first horror film to use a theme park as its setting, Hill manages to get a lot of production value out of the colorful locations, and wring some surprising menace out of shots of merry-go-rounds and tilt-a-whirls.

The plot involves a group of young carnival employees celebrating the final day of their failing park by enjoying some underage drinking and premarital sex. Natch. We get the jock (Dean Jacobs), the slut (the ridiculously attractive Kailey Marie Harris), the geek who likes to scare people with a Halloween mask (Tyler Kale), the faux punk (Kyle Riordan), the temptress (Alicia Marie Marcucci), the uptight boss (Steve Rudzinski) and the straight-laced, competent female virgin, Missi (the terrific Nicole Beattie). Between drinking and screwing, the group are eventually attacked by a pair of masked redneck killers (one of whom is played by Skinny Puppy’s Nivek Ogre) and dispatched in a variety of messy ways. Eventually we discover that the murders are all a publicity stunt by the park’s owner Mr. Hyde (a memorable, but tiny, part by HELLRAISER‘s Doug Bradley) to drum up business. It doesn’t QUITE make sense (wasn’t the park supposed to be empty?), but that’s part of the fun.

A slasher film lives and dies by the quality of its, uh, slashing, and the park allows for a variety of inventive kills, from the classic machete to the skull to a character getting their face deep-fried. There are a couple of shots of exposed internal organs, but most of the murder is more (intentional) fun than out-and-out gross, and the manic pace of the film’s second half (and the large number of characters/victims) keeps things from getting too bogged down. What it’s lacking in inventive gore, however, it makes up for in two really fun villains, particularly Ogre who seems to be having a blast as he tears through the youngsters while doing his best Bill Moseley impression. To the film’s credit, it never even attempts to develop this pair of maniacs. They are simply redneck weirdos who love to kill. Fine by me.

While rough around the edges, SCREAM PARK hits all the requisite beats expected from an 80s slasher – even down to the stark white-on-black opening credits. Your enjoyment of the film will hinge greatly on your appreciation for the formula, and delight out of seeing a director embrace the cliches without ever attempting to subvert them. Those raised on a diet of masked killers will eat this right up, while there’s still enough style and enjoyable performances to make it worthwhile for those – like myself – who like having a bit more to chew over.