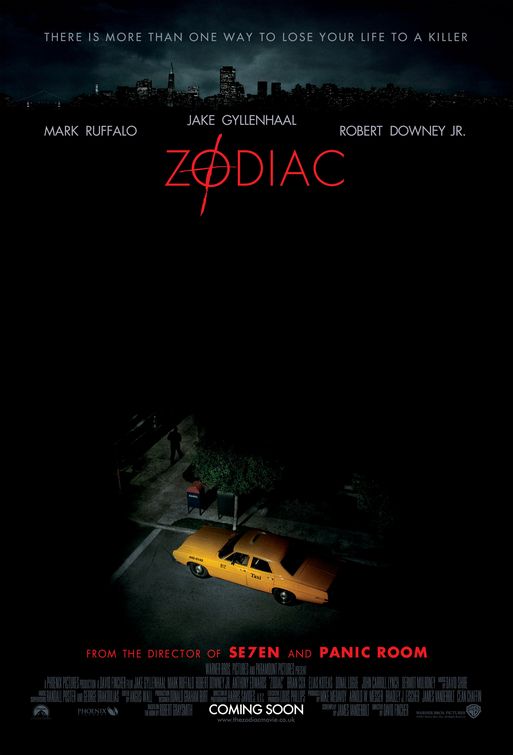 ZODIAC is playing at 9pm at the Film Society Of Lincoln Center in New York City.  Here are the details.  You will want to go, not only because ZODIAC is one of the better American films of the past decade, but also because this is part of the “Opening Acts” series which is serving as a prelude to the New York Film Festival, which kicks off next weekend.

The movie clearly means a lot to Fincher.  It should.  It’s probably his masterpiece (to date).  Considering that Fincher and writer Andrew Kevin Walker redefined the serial-killer genre with 1995’s SEVEN, and that he’s one of the most wildly talented directors of his generation in general, it’s saying plenty to call ZODIAC a step up.  This time around, Fincher had a script from James Vanderbilt, who spoke extensively with Robert Graysmith, the character Jake Gyllenhaal plays, before writing the movie.  Robert Graysmith was a newspaper cartoonist in San Francisco in the late 1960s and early 1970s.  He became consumed with the Zodiac Killer case, and spent years doggedly pursuing it.  This case has a weird way of sucking people in, as the movie demonstrates.  The Zodiac Killer murdered at least five people, taunted the authorities by mailing baffling symbols to the local papers, and sending the area into a general panic.  Among the terrorized Californians hearing the news reports at the time:  A very young David Fincher.  So this is about as personal a story as this filmmaker has ever told, which may not be saying much:  Fincher is hardly the most revealing of storytellers. His films are immaculately composed and impeccably cast and directed, but self-revelation is not among their virtues.  In fact, alienation and willful isolation are much more his style.

The score is by David Shire, composer of the unforgettable music for THE TAKING OF PELHAM ONE TWO THREE.  The editing is by Angus Wall, who next won Academy Awards for THE SOCIAL NETWORK and THE GIRL WITH THE DRAGON TATTOO.  Most conspicuously wonderful is the cinematography by the late, supremely great Harris Savides.  The look of the film is somewhere between the great films of the 1960s and 1970s when the story is set, with the technical sophistication and clarity of the modern age.  The look is simultaneously beautiful and horrifying.  A couple sequences in ZODIAC are scarier than anything found in even the best of the straight-up horror films of the era.  That’s as it should be.  It’s a profoundly unsettling story.