This review contains spoilers for 10 TO MIDNIGHT.

For an ’80s Charles Bronson flick that includes some slasher movie tropes by featuring an oft-nude killer who stabs women to death, 10 TO MIDNIGHT has a surprisingly good script courtesy of William Roberts. Even better is that director J. Lee Thompson brings together a more talented than usual supporting cast for this type of Cannon Films production, forcing Bronson to awaken from the somnambulistic state in which he appeared to exist in most of his post-HARD TIMES films. That said, I am not claiming that the film is a forgotten classic, but it does serve as a relatively late-career reminder of why Bronson was a movie star in the first place. 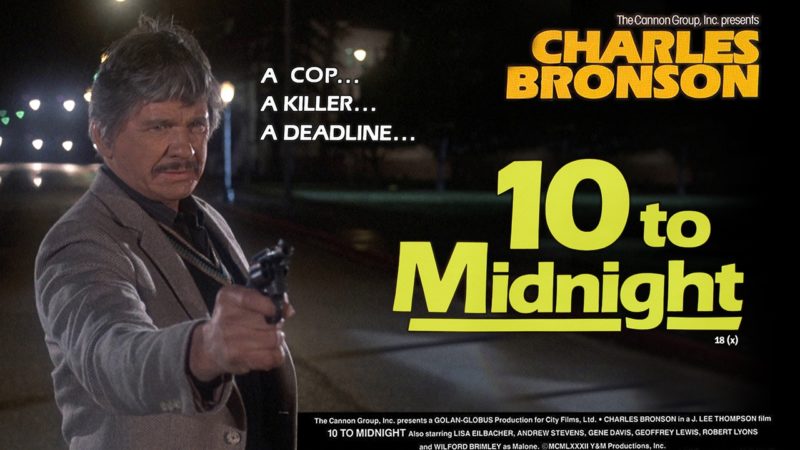 Despite the positives at play in 10 TO MIDNIGHT, it gets off to a rough, clichéd start with Bronson playing police detective Leo Kessler—a sort of poor man’s Harry Callahan—as he gets annoyed with a reporter who won’t leave him alone to do his damn job. But once the focus briefly shifts to Warren (Gene Davis), a creepy “incel”-type who gets bareass naked to murder the young woman who spurned his “advances” (that included unzipping the back of her dress in the break room at work), the flick takes on some sleazy momentum.

Kessler is paired with Paul McAnn (Andrew Stevens), a younger, by-the-book detective, to investigate the murder. It doesn’t take long for Kessler and McAnn to zero in on Warren as their number one suspect, but problems come from Warren’s abilities to secure seemingly airtight alibis and avoid leaving behind DNA evidence. When Warren starts to harass Kessler’s student nurse daughter Laurie (Lisa Eilbacher) and her roommates, Kessler is driven to extremes in an effort to get his man. 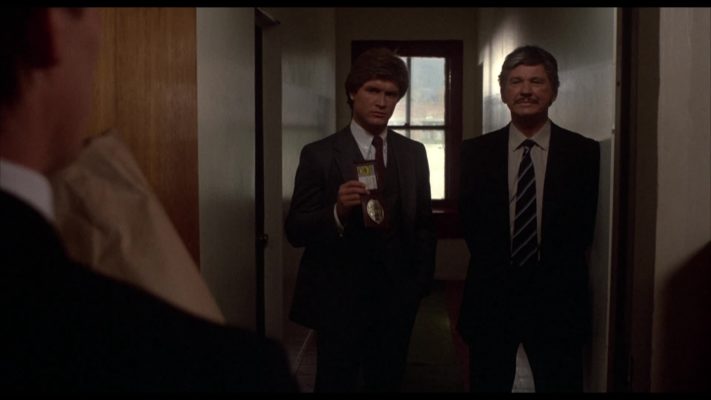 The clever thing about 10 TO MIDNIGHT is that it plays into the expected tropes of a movie that features Charles Bronson as a cop who will do anything to bring a killer to justice, but it does so in unexpected ways. Instead of treating the inexperienced McAnn as a hindrance to his investigation, Kessler appreciates the younger man’s honesty and trusts him with Laurie’s safety. Instead of grabbing Warren and going full vigilante on him, Kessler goes for a different illegal method of dispensing justice that backfires in an unexpected way. While Kessler is estranged from his daughter, the performances of Bronson and Eilbacher sell a far more realistic portrait of their strained relationship than the script provides.

In addition to the solid supporting work from Stevens, Eilbacher, and Davis, Thompson stacks the cast with such good character actors as Wilford Brimley, Geoffrey Lewis, and Robert Lyons. Each actor treats the trashy material with more respect than it deserves, lending some legitimacy to what is—at times—an uneasy melding of tough Charles Bronson cop movie and bloody slasher flick. Even more importantly, Thompson seems to realize that Bronson is more inclined to (let’s be honest here, the man did phone in a lot of his ’80s performances) show up to play if the actors around him are putting in an effort. Even though 10 TO MIDNIGHT is a trashy exploitation film, everyone involved gives it their all and that seems to have rubbed off on Bronson who gives his most sincere, wryly charming performance in years. 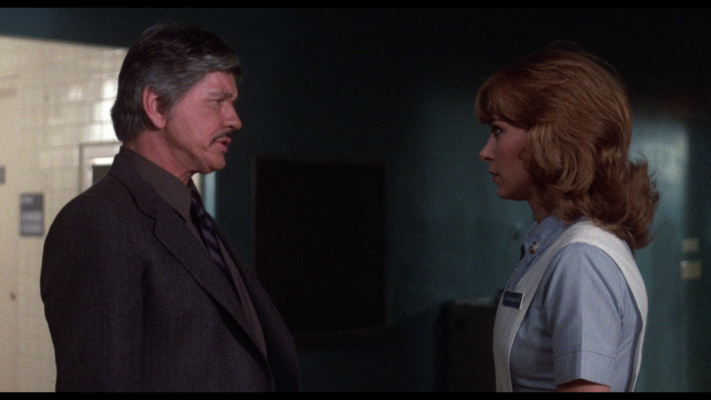 All those positives noted, there is plenty about the film that does not work. The third act satisfies the Bronson audience that is looking for their hero to pick up a gun to solve the problem. But this turn of the plot is at the expense of the relatively well-constructed two acts that preceded it. A naked, bloody, panicked Warren running down the middle of a nighttime street is an arresting image, to be sure, but selling out the meticulous, careful villain to turn him into a fictional naked version of disgusting real life spree killer Richard Speck is a real disappointment. It also undermines the unusually nuanced treatment (for a Bronson film) of the question of how far an honest cop should go in an effort to pursue justice by taking away any possibility of an ending where Kessler doesn’t put a bullet in Warren’s brain.

Even with an ending that doesn’t thematically fit the rest of the film, 10 TO MIDNIGHT remains one of the better Cannon films that Bronson starred in. It may never find the perfect balance of slasher sleaze and police procedural, but the better than average script and good performances make it worth checking out. 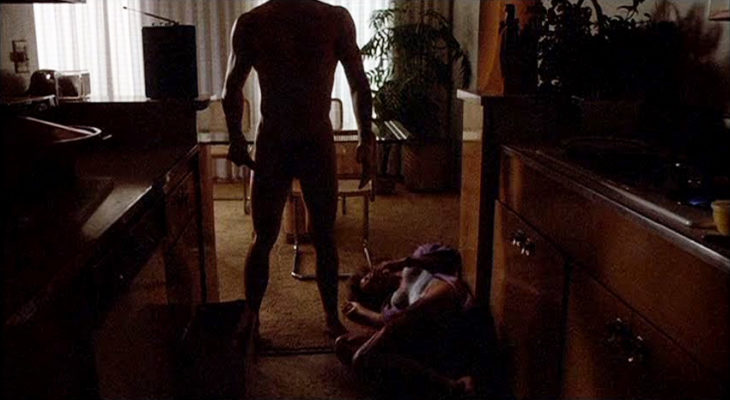 The new 4K scan from the original negative highlights both some of the impressive location shooting in the film and just how low-budget the production actually was. Despite some excellent work by cinematographer Adam Greenberg, the film occasionally shows the seams of Thompson’s fast shooting schedule that is mentioned several times in the extras.

Included on the disc are four short interviews. Producer Lance Hool is the most forthcoming about how Golan and Globus (as usual) promised a much larger budget and then constantly shrunk it down while the film was in production. The other interviews—featuring actors Andrew Stevens, Robert Lyons, and Jeana Tomasina contain fairly bland, largely upbeat anecdotes that focus on Bronson as a gruff but professional presence on set.

Two commentaries are included. The new one recorded for this release is with Paul Talbot—the writer of the Bronson’s Loose! books. While informative about Bronson and the production of the film, the minutiae that Talbot goes into is a bit much at times. An older commentary from a previous release that features producer Pancho Kohner, casting director John Crowther, and film historian David Del Valle is more wide-ranging and engaging, but one gets the feeling that the trio are soft-selling how it was to work with Bronson since their vision of him as a warm, outgoing guy flies in the face of the terse, insular, polite man described by everyone else in the other bonus features. 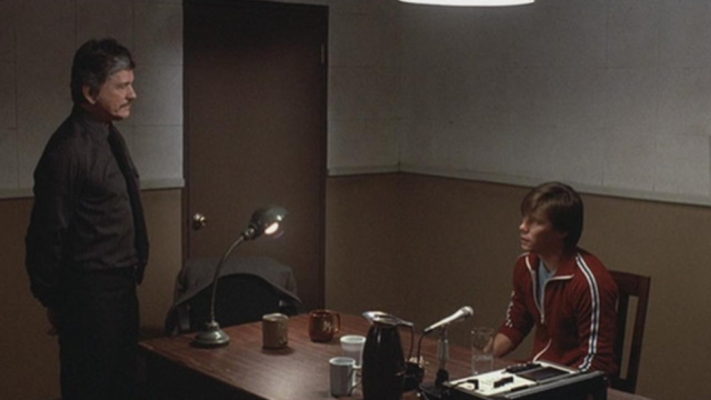 To give yourself a viewing treat after watching the film, check out the theatrical trailer included on this disc to see how Cannon sold 10 TO MIDNIGHT as simply another Bronson vigilante vehicle. For once, a Cannon film is actually better and more entertaining than its over-the-top marketing.

The 10 TO MIDNIGHT Blu-ray is available today from Scream Factory.