In this era of streaming, some days it just seems like there’s too much content to sift through.  Every year, there are so many low-budget genre pictures that slip through the fingers of fans the world over, simply because they’re not getting discovered by the people that would love them most. We all pine for the glory days of 42nd Street here at Daily Grindhouse or even the VHS boom of the early ‘80s, but where are the this generations crop of low-budget, sci-fi, horror, and action trash? Who has time to sift through all these films to find the real gems and moreso, who has time to read long winded reviews? It’s a daunting task, and it requires someone who loves genre cinema more than he loves his own words, and that person may be me. That’s why we’re going to be Keeping It 400 here at Daily Grindhouse: 400 word reviews that plainly and simply let you know if these films are worth checking out.

The Film: WEST OF SUNSHINE

The Plot: A father has less than a day to pay back a gambling debt while looking after his son.

The Review: In another life, I worked as a mattress salesman. Salespeople enjoy many vices, but the big three were golf, drinking, and gambling and most events at the store involved all three. One of the older guys laid some sage words on me on a slow afternoon shift: “For the true degenerate gambler, it’s not about winning or losing, it’s all about the action.” The late Damian Hill portrays Jim, one such gambler in WEST OF SUNSHINE. He looks the part: unkept and greasy. He owes some serious scratch to a violent loan shark and has less than a day to pay it back. On top of that, he’s got to get through his menial day job as a courier and look after his son. 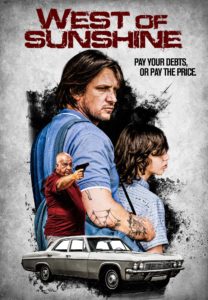 WEST OF SUNSHINE is a quiet and mostly unassuming character study of a man who needs to grow up and get his priorities straight. As Jim moves throughout his day, all of his life decisions up to that point add up to affect him over these relatable 8 hours. Jim considers selling off his prized possession to pay off his debt: the ‘70s muscle car that is the only thing his estranged father left to him. Unable to do so, he takes to delivering drugs for an old associate of his. A risky move, but desperate times call for desperate measures. No matter what happens, Jim seems to be unable to cast aside his vices. There’s a moment halfway through the film where everything could have been wrapped up thanks to betting on a horse race, but Jim’s addiction to the action brings him right back to zero. It’s a poignant moment that tacitly shows that degenerate gambler mindset. Gambling is the once vice I never adopted, but as a drinker, I certainly understand the thought, “Okay, just one more.”

The film falls into modern indie drama traps like when the indie muzak swells over a slow-motion sequence of Ty Perham as Alex cleansing Jim at a car wash—both literally and metaphorically—and a thematically on the nose haircut. It’s all very twee, but the film is filled with just enough grit and grime to keep the proceedings from getting saccharine.

WEST OF SUNSHINE is a quietly effective—and blissfully brisk—film, one part crime thriller and one part father son drama that deftly balances the two genres, even if there aren’t a lot of surprises along the way.

WEST OF SUNSHINE opens theatrically January 25th and is currently available on VOD.