If you love regional horror obscurities (and if you’re here, you probably do), you’ll be pleased to learn about Apprehensive Films’ announcement of a limited DVD release of the shot-in-Wisconsin Christmas slasher flick BLOOD BEAT! The 1982 flick, released long ago on VHS via Trans World, concerns a family holiday deep in the northern part of the dairy state that finds a samurai helmet in a languishing hope chest (very common occurrence in the forests of Wisconsin) that causes the joyful, hunting-obsessed group to start getting picked off one by one! 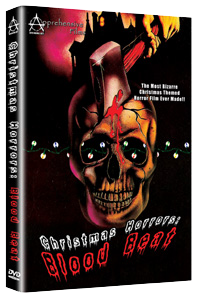 A welcome addition to the growing library of regional obscurities hitting DVD and certainly one of the stranger Christmas-themed horror flicks, Apprehensive Films is releasing BLOOD BEAT in a full-frame presentation with trailers for other Apprehensive releases on December 4, just in time for your own yuletide get-together. The run is limited to 500 copies, so check it out before this little-seen slasher vanishes again!

KEEPING YOU INFORMED OF DAIRYLAND DANGERS,