For centuries, storytellers have conjured boundless horrors hailing from distant lands, dimensions, and even worlds, but, when it comes right down to it, nothing is scarier than the human beings surrounding us. Rarely is this fear as immediate as it is in the case of apartments, where we share a dwelling with people who are initially strangers. They could be all sorts of weird because we don’t know what they’re doing behind those thin walls that barely separate us from them–or at least that’s what scores of horror movies would have you believe. David Marmor’s 1BR joins these ranks with one of the most damning portraits of apartment life imaginable, one that assumes you don’t just have to look out for the one bad apple in the building but rather the entire fanatical bunch. 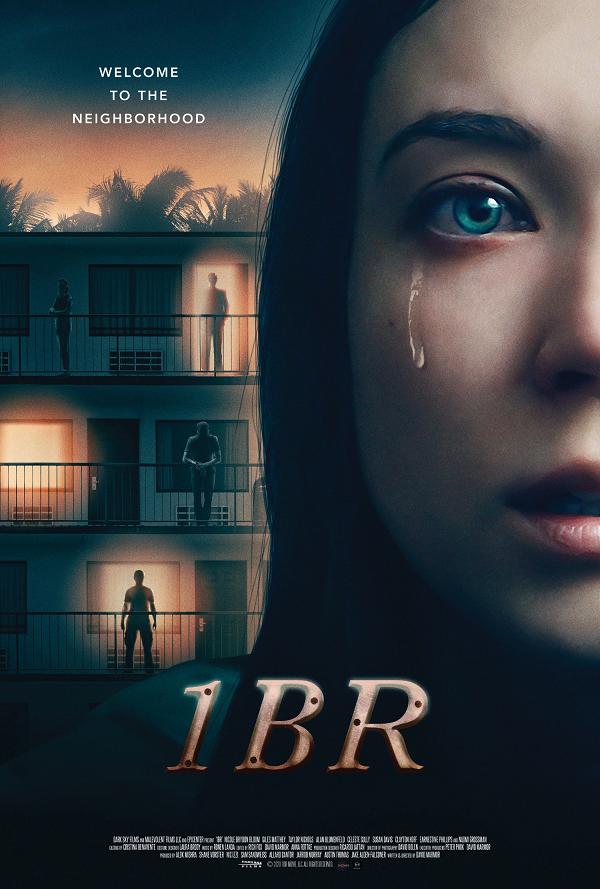 When Sarah (Nicole Brydon Bloom) moves to L.A., she has dreams of working in costume design, which means she first has to live out the nightmare of being the new girl in town. She’s gotta work for a domineering boss at a thankless temp gig; she’s gotta hear it from her estranged father who never wanted her to move at all; and, most importantly, she has to find a place to stay. The last part comes almost too easily when she stumbles upon a building with exactly one vacancy and a highly selective process for admitting new tenants. After the enigmatic landlord (Taylor Nichols) selects her, Sarah can’t believe it. The place is perfect (almost too perfect). Her neighbor Brian (Giles Matthey) is charming (almost too charming). The other tenants are welcoming (almost too welcoming).

It is, of course, all too good to be true. Soon enough, she learns that the pipes rattle at an alarming volume each night, robbing her of sleep. This is only a sinister prelude to the horrors she uncovers when her neighbors turn out to be not at all what they seem. And I don’t just mean the obviously creepy “nice guy” next door, either. We’re talking the whole lot of them, who are hellbent on taking the notion of “community” to the next level.

I hesitate to say much more: 1BR is one of those Rubik’s cube movies that’s constantly shifting and contorting with each new plot development, so most of the enjoyment comes from experiencing them first-hand. Suffice it to say, what looks to be another parable about the horrors of L.A. (I motion that we call this sub-genre “Hell-A movies”) pivots into something else altogether. Along the way, Marmor’s script weaves in bouts of physical and psychological torture, with one stretch in particular leading audiences to believe 1BR might be a claustrophobic, single-location thriller, complete with some gruesome, unsetting gore. Mercifully, Marmor doesn’t dwell too much on this and soon pivots again as Sarah moves through the various stages of this ordeal, which ultimately fixates on the power of cult belief.

1BR has a little bit of everything as a result: the early-going, when the pipes are driving Sarah out of her mind, almost implies a supernatural terror is afoot. When one of her neighbors begins to anonymously harass her because she’s breaking the building’s rules about pets, it feels like we’re in psycho-stalker territory. (Fair warning: this episode climaxes with a gruesome fate for the poor pet that makes for an awful “shit just got real” moment.) Even when the cult aspect comes into focus, Marmor doesn’t settle on one aspect: we watch Sarah’s resistance and disbelief fade into an unsettling acceptance and embracement of the horrors that have consumed her.  1BR doesn’t offer much complex insight into the psychology of cult entrapment, choosing instead to mine well-established tropes for both horrific and dramatic purposes. Marmor particularly exploits the quietly chilling nature of how cults manipulate their members into carrying out sickening deeds in the name of a charismatic leader (in this case, deceased enigmatic self-help guru Charles B. Ellerby, whose message lives on in old videos).

What’s impressive is how nimbly Marmor navigates such a meandering tale. The pacing here allows each plot development to linger just long enough, so 1BR never feels too fidgety as it winds down its twisted path. He’s also invested in his characters, meaning their stories dictate the flow of the narrative instead of the various horrors that unfold around them. 1BR has a premise that’s ripe for a menagerie of horrific sequences that exist for the sake of it, but Marmor deftly and naturally couches unsettling moments into the story, each one serving to drag Sarah down the rabbit hole. In fact, the final act is downright clever in the way it forces Sarah’s inner turmoil to bubble to the surface, putting 1BR on its climactic path towards becoming a rousing survival thriller.

1BR is especially crafty in this regard. Bloom infuses Sarah with the quiet agony of a wayward soul who just needs to catch a break, making her journey into the cult’s clutches utterly believable. She leaves just a hint of trepidation with every step, keeping a flickering hope alive that she might break free. Both Nichols and Matthey do their best to keep her in line, though, both of them nailing that sinister pretense of neighborly warmth you’d expect from cult leaders. Nichols is especially terrifying when he lets the mask slip off to reveal the callous ringleader beneath the kind exterior, a crucial performance choice that slyly plants the seeds of righteous comeuppance in the audience’s mind.

I have to admit I wasn’t sure 1BR would commit to that; it’s a fairly (and effectively) miserable picture for long stretches that subjects viewers to the psychological and physical torment of multiple women. Thankfully, Marmor doesn’t insist on relentless misery with a climax that leaves room for catharsis and release. Don’t take this to mean 1BR has a happy ending, but it at least doesn’t take the most obvious, nihilistic route. Instead, it ends on a devious, almost playful note that somehow just feels right, even if it does feel cribbed from a more prominent movie dealing with similar subject matter, which leaves me wondering how much time must pass for something to feel more like an homage than a rip-off. Regardless, 1BR is a reminder that some movies need every bit of their runtime to really grab you and leave a mark, not to mention a warning to carefully read your lease agreement. Make sure the fine print doesn’t have a disclaimer about not being held liable for cult activity.

1BR is now available on DVD and Blu-ray from Dark Sky Films.