Before we get into the weeds with YOU DON’T NOMI, let’s be clear about one thing: YOU DON’T NOMI, despite its marketing and its cataloging on the World Wide Web, is not a documentary. And that’s because a documentary generally has two things: facts, and a goal. YOU DON’T NOMI has neither of those things. That’s not to say that it doesn’t offer its fair share of entertainment, or that director Jeffrey McHale didn’t set out with a specific goal in mind, but by film’s end, the goal you take away is the foresight you’d already obtained on your own before you ever sat down to watch. More on that in a bit.

YOU DON’T NOMI is less of a documentary and more of a visual essay and appreciation, comprised of folks from all walks of life either raining down actual praise on the infamous 1995 flop SHOWGIRLS, directed by Paul Verhoeven, or recognizing it for the over-the-top but entertaining piece of shit that it is, or dismissing it as trashy, immature, and misogynistic…well, trash. Obviously, your own opinion on this movie that everyone has likely already seen will determine what you take away from it. Having seen SHOWGIRLS a few times during my pubescence but not for a very long time since then, my opinion on it, over time, faded into indifference and dismissal. Just one more movie in a sea of movies that I saw, recognized wasn’t very good, and haven’t really thought much about since. Except for the occasional reissue of the flick on Blu-ray with some kind of included gimmicky swag, I assumed SHOWGIRLS was largely forgotten. I had no idea it went onto live out a second life as a cult classic, with theatrical tours and Q&A’s and live reenactments by actors both drag-queen and non-drag-queen alike. I had no idea, after all this time, it was a film people were still discussing at all. 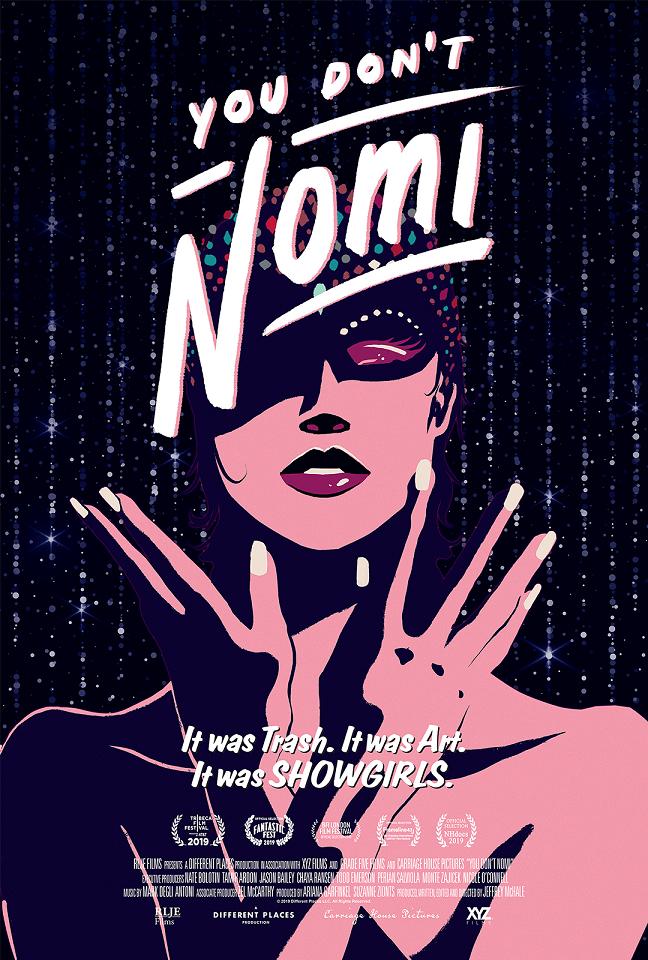 YOU DON’T NOMI includes participation from film critics, SHOWGIRLS superfans and apologists, and pop culture enthusiasts, yet it doesn’t contain any active participation from a single person involved in its making. Whether this was purposeful, or because it was impossible to get anyone involved to go on the record within the confines of a discussion where two-thirds of its participants recognize that SHOWGIRLS is a terrible movie, we don’t know. What that leaves, ultimately, are a bunch of people who had nothing to do with making the movie telling you that SHOWGIRLS is brilliant in ways you didn’t notice, entertaining in ways that were never intended, or without any redeemable value at all. Ironically, it’s those participants who deride SHOWGIRLS’ content as ill-informed, misogynistic, and immature who come away sounding the most level-headed and thoughtful, whereas those attempting to defend the film’s legacy really stretch the limits of legitimacy. One participant in particular, who has dedicated a good portion of his life to defending SHOWGIRLS and trying to make people understand that it’s a flick worthy of a second evaluation, completely invalidates his position by then going on to lampoon other much more well received films like Verhoeven’s own BASIC INSTINCT, or the generally well-regarded FOREST GUMP and AMERICAN BEAUTY, and calling critics who described SHOWGIRLS as being poorly made “fucking morons.”  What’s supposed to come off as feisty and fun instead reeks of elitism, and it tarnishes the otherwise honest and fair point of “hey, you’ve misunderstood this movie;” and in almost the same breath where he lavishes praise on SHOWGIRLS’ cinematography, he calls AMERICAN BEAUTY a piece of shit, which has been nearly universally renowned for that very same thing. (For the record, I don’t like AMERICAN BEAUTY, and I recall being fairly unimpressed by BASIC INSTINCT when I first saw it, but I also wouldn’t attempt to downgrade the legacies they’ve gone on to achieve, nor speak for anyone else and dismiss the people who enjoy them. Also, I love FOREST GUMP – fight me.) 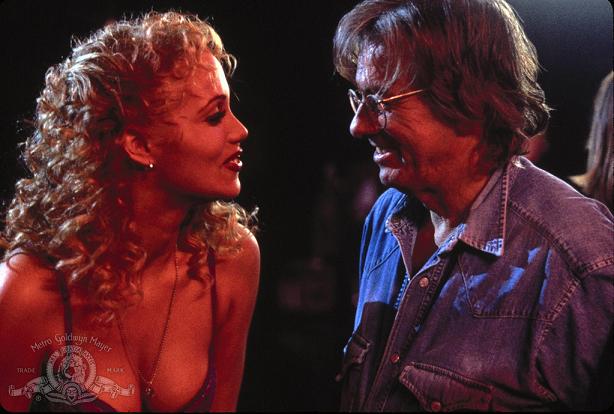 YOU DON’T NOMI really only comes alive during the moments where we get to see archival interviews with Paul Verhoeven where he both defends and admits SHOWGIRLS’ shortcomings, and when there is an honest, critical analysis done by critics who avoid hyperbole and outrageousness by sharing their calm and honest thoughts. From a technical standpoint, YOU DON’T NOMI is engaging through its clever use of editing, largely incorporating clips from all of Verhoeven’s other films, either to highlight the director’s commonalities of sex, violence, the street-justice vengeance of abused women (and vomiting), or even through the use of editing clips of SHOWGIRLS into his other works, as if Verhoeven’s better received films are actually passing judgment on it. (Arnold Schwarzenegger’s Quaid turns on the television in his apartment to see a news report of SHOWGIRLS’ miserable failure with critics and audiences, and the expression on his face says it all.) 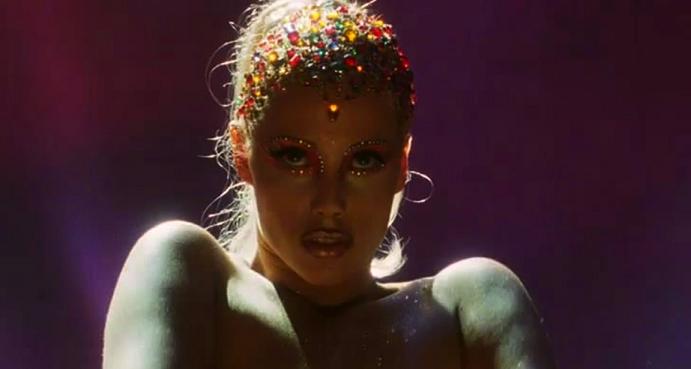 Despite all my misgivings, you should give YOU DON’T NOMI a shot if you’re even marginally interested in SHOWGIRLS’ place in cinema history. You won’t learn a blessed thing beyond the fact that some people out there like it, and others don’t like it, which is something you already know, but you may find some value in seeing how the “world’s first mainstream NC-17 film” is enjoying a second life among the midnight movie crowd. Plus, if you’ve ever wanted to see a supercut of everyone who’s ever vomited in a film directed by Paul Verhoeven, you could do a lot worse. 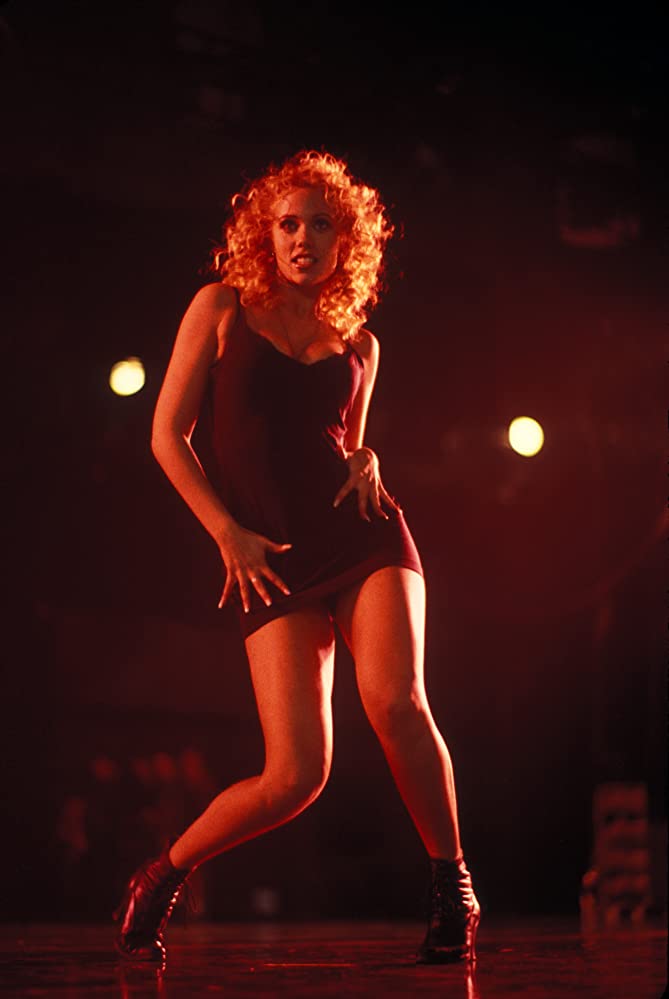 YOU DON’T NOMI is now available on Blu-ray from RLJ Films.