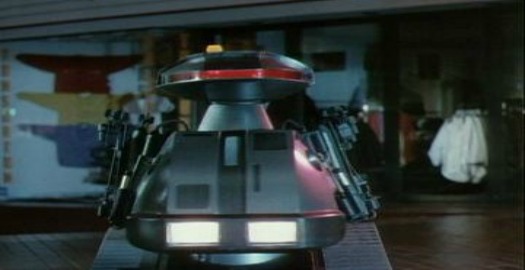 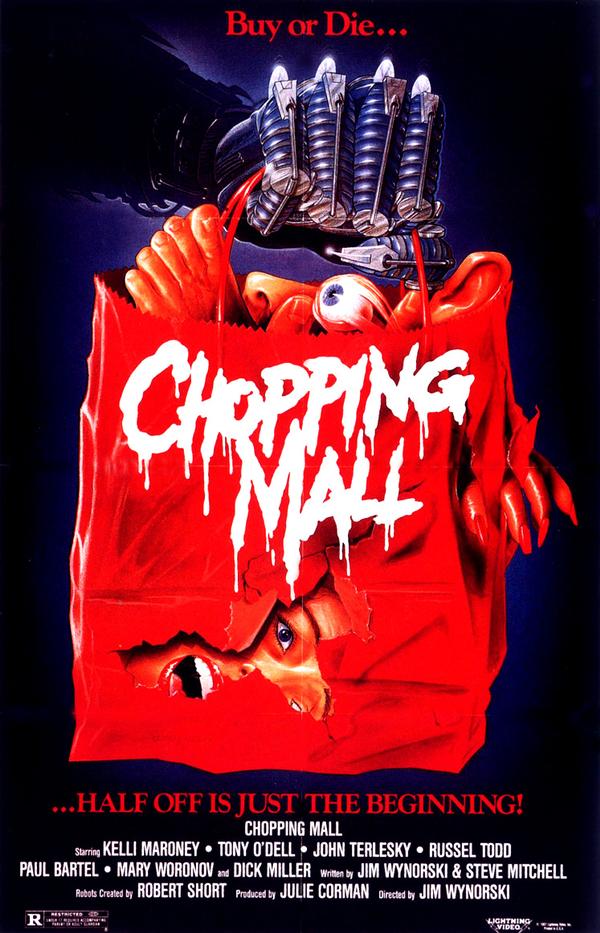 Some movies can only be watched after midnight.  They shouldn’t be fed, but they can be watched.

And they’ll be watched by a very specific kind of personality.  For me, it started sometime in the late 1980s or the very early 1990s.  If I wasn’t wearing out my GHOSTBUSTERS or BIG TROUBLE IN LITTLE CHINA VHS tapes, I was glued to HBO for any movies I could watch.  The problem with HBO was, you were at the mercy of their programming schedule (this was long before Tivo or Netflix or Hulu or whichever), which meant that you were going to watch CADDYSHACK 2 or JUST ONE OF THE GUYS over and over and over again.  At a certain age, that routine wasn’t enough anymore.  Some turned to dating.  Others forewent dating, staying glued to the TV, but doing it later and later. That’s where you’d meet folks like Elvira (now a Daily Grindhouse contributor!), Joe Bob Briggs, or the Crypt Keeper.  That’s where you’d catch Mystery Science Theater 3000 0n Comedy Central, or Up All Night on USA. 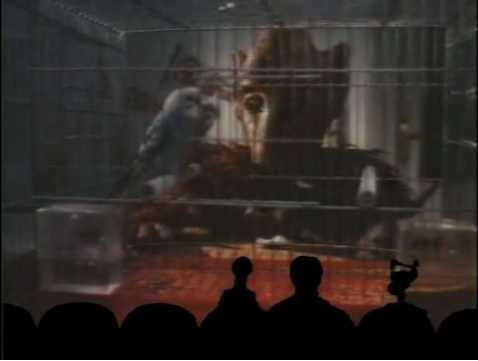 MST3K was a show with the premise that a space janitor and his robot companions were forced by mad scientists to watch the worst movies in the universe; the guys would then crack wise through movies like MITCHELL and THE POD PEOPLE.  I would argue that for better or worse, the sensibility of MST3K has been an underrated influence on a huge portion of the way movies are so often written about on the internet; sarcastic and blustering about movies, yet consumed by them.  Up All Night, meanwhile, was hosted alternately by Rhonda Shear, a voluptuous blond who never wore much in the way of clothes, but always seemed to be in on the joke, or Gilbert Gottfried, a squinting, screaming comedian who has made a long career of annoying people.  I loved them both, personally, but I loved the movies they showed even more. 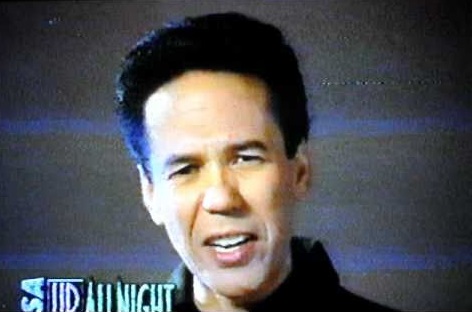 Up All Night showed bad genre movies, the way MST3K did, but they generally showed the naughtier ones (with all the naughtiest parts cut out, USA being a network subsidiary and all).  Now you’ve gone into the world of folks like Shannon Tweed and The Toxic Avenger, Betsy Russell and The Beastmaster, Andy Sidaris and Robert Z’Dar.  You might see a movie like “Rowdy” Roddy Piper’s post-apocalyptic horny-mutant neo-classic HELL COMES TO FROGTOWN.  (Still the greatest movie title of all time, for my money.)  Or you might see a movie like CHOPPING MALL.

CHOPPING MALL, or as it is sometimes known, KILLBOTS, is a movie about killer robots.  In a shopping mall. 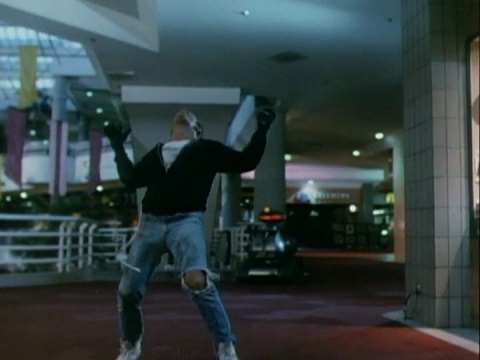 The movie begins with a scene of a jewel thief, who maybe not accidentally resembles Michael Biehn from THE TERMINATOR, ripping off a mall jewelry store.  His flight is intercepted by one of the Killbots, who will come to play a larger role in the film, for now interrupting and punishing petty theft with a taser-type device that looks a hell of a lot like electrocution.  In the first surprise of the movie, this is actually a corporate video, being shown to a civilized crowd of investors by some very standard ’80s-type capitalists.  Most of the crowd is very impressed with the mall’s new crime deterrent (the exceptions being Corman regulars Paul Bartel and Mary Woronov, who roll their eyes).  The robots look to me like a cross between Cyclops from the X-Men and a rolling version of that teleportation chamber Jeff Goldblum invented in THE FLY, though fans of CHOPPING MALL less eccentric than I have compared them to Johnny Five from SHORT CIRCUIT (a movie which, not for nothing, came out one year earlier.) 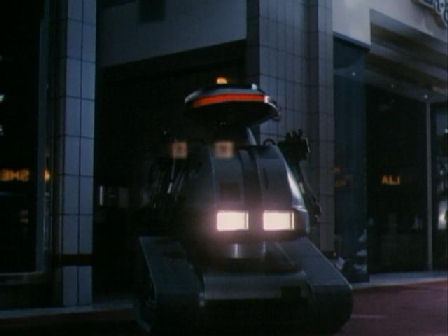 Really, more than anything, the Killbots are a cinematic prelude to the ED-209, from 1987?s ROBOCOP.  Both are security measures prone to malfunction, both are peacekeeping agents with lethal tendencies, both warn their victims in calm robotized voices.  (Although the Killbots, hilariously, have Long Island accents, voiced as they are by the film’s director.)  I’m not suggesting that ROBOCOP was influenced by CHOPPING MALL, but I am suggesting that malls in the 1980s were clearly the locations of an under-reported crime wave that seems to have necessitated the implementation of murder-prone robot enforcers. 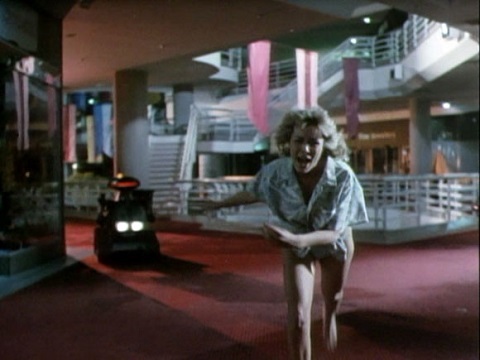 The mall in question here is the Sherman Oaks Galleria, which you may know from its roles in FAST TIMES AT RIDGEMONT HIGH, COMMANDO, TERMINATOR 2, and INNERSPACE.  I know it because I used to go to the gym there regularly (and in recent years they put in an Arclight Theater).  As far as I know, the Sherman Oaks Galleria has never tried to institute robot tanks as mall security, but it’s not the worst idea I ever heard.  The problem comes, as it so often does in movies, when a lightning storm descends on the mall, bringing the Killbots to murderous life.  Among their first victims are a technician played by Gerrit Graham, a character actor who once played Bud the C.H.U.D., and a janitor played by Dick Miller, the tough-talking Corman regular who is such a favorite of Joe Dante.  Dick Miller gets surely one of the more dramatic death scenes a film janitor has ever received: 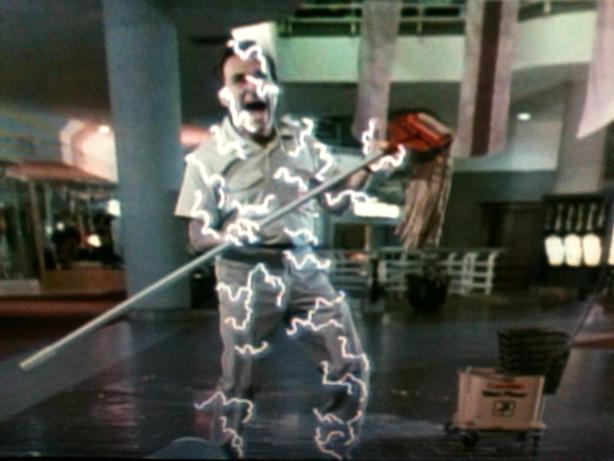 But the majority of CHOPPING MALL, of course, centers around eight teenagers who camp out in the mall overnight, for an all-night make-out party.  Little do they know that they’re violating mall-time martial law, and the punishment for that is death.  The kids are a mixed bag of forgettable and awesome, including Kelli Maroney (NIGHT OF THE COMET, a sweet movie in its own right), Tony O’Dell (TV’s Head Of The Class, apparently), John Terlesky (the Deathstalker in DEATHSTALKER 2), Barbara Crampton (RE-ANIMATOR and FROM BEYOND), and a girl named Suzee Slater, who somewhat heroically pulls double-duty by providing most of the movie’s best T&A and also providing the movie’s single best death scene.  Seriously.  I’m not much of a gorehound; I’m the guy who’s always rooting for everyone to get out alive, but every once in a while a character bites it in a way that even a humanitarian like me has to stand up and applaud.  That’s the brand of hilariously ridiculous death scene that Suzee Slater receives in CHOPPING MALL.  If you watched that trailer, you’ve seen it, but you really should check it out in the context of the movie if you can.  It’s hysterical, so obviously great that the movie actually repeats during the end credits.

Once that character’s death occurs, the rest of the kids are motivated into action, running into a sporting goods store subtly named Peckinpah’s and loading up on automatic weapons.  Apparently malls in the 1980s provided automatic weapons — no wonder the Killbots were deemed necessary.  Some of the movie’s most intentionally/unintentionally (it’s hard to tell) moments come from the way these San Fernando Valley teens almost instantly start acting like the roughnecks from PREDATOR — although no joke, most of these kids are not half the convincing actors that Arnold Schwarzenegger and Jesse Ventura were.  There’s actually a scene where you can see three of the teens marching in step, loaded down with artillery.  Also, one of them has a habit of hunching down with his legs spread wide, in the manner of a child imitating Arnold in COMMANDO.  It doesn’t do them any good.  I mean, the Killbots have laser eyes.  How can any teenager stand in the face of laser eyes? 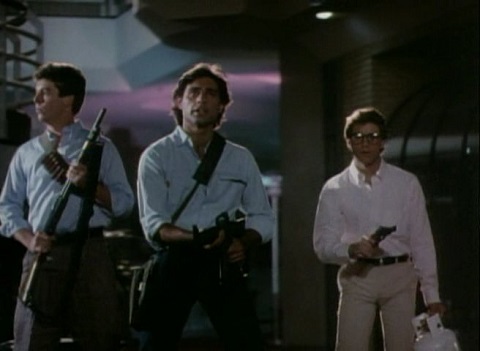 CHOPPING MALL comically apes the structure of the slasher movies of the era — the eight kids are reduced in number in order of promiscuousness, and they’re killed off in couples, just the way they paired themselves off.  The last two kids to remain are the nerdiest (and least interesting, naturally), although there is a fun scene where a girl hides out in a pet store, PEE-WEE’S BIG ADVENTURE style, and tries desperately to suppress a scream even as tarantulas and garden snakes climb all over her. 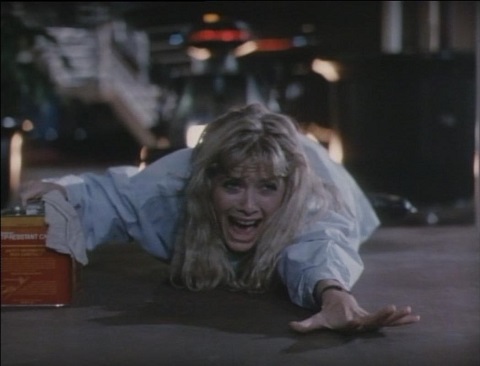 In the end, you basically know how this movie’s going to go from the moment you sit down to watch it, but that doesn’t make it any less enjoyable.  This is the kind of movie that flexes a different viewing muscle than any of the “better” movies I’ve been referencing all along — your expectations are different, so you’re freed up to enjoy the senseless mayhem without demanding much in the way of character development or intricate plotting.  It’s dumb fun, and there’s an important place for that.  Sometimes we need to experience the valor of the human spirit, and sometimes we need to know what a robot riding an escalator looks like. 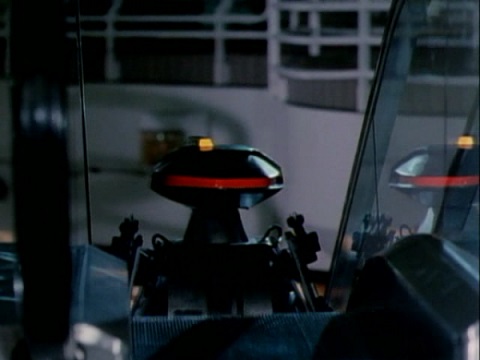 CHOPPING MALL was co-written and directed by Long Island’s Jim Wynorski, a filmmaker who has had an interesting career arc, to say the least.  He started out as a Roger Corman adjacent (Corman’s wife Julie produced CHOPPING MALL), directing movies like BIG BAD MAMA 2, DEATHSTALKER 2, THE RETURN OF SWAMP THING, and MUNCHIE STRIKES BACK.  Them’s a lot of sequels!  Maybe he can take over for Michael Bay when he’s done with TRANSFORMERS franchise.  It’s something to hope for. 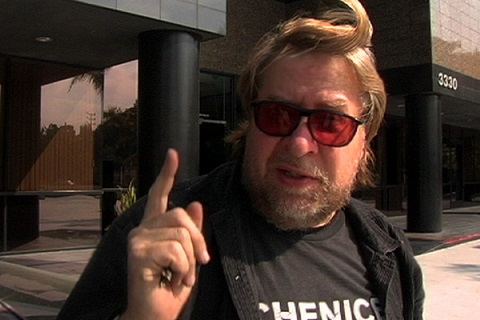 If you’d like to learn much more about Jim Wynorski, check out POPATOPOLIS, Clay Westervel’s terrifically watchable documentary about the filmmaking legend. It’s available on iTunes and Netflix.

And CHOPPING MALL is the final stop on Cinefamily’s month-long trip through the United States Of Horror.  Fittingly for a series playing in Los Angeles, it’s the “Southern California” entry.  It plays at midnight, as it should. 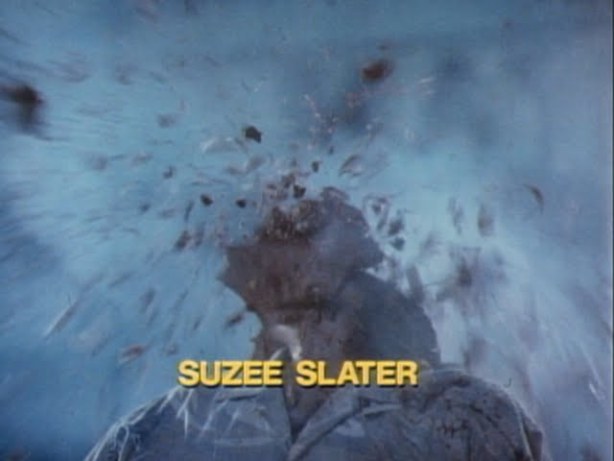