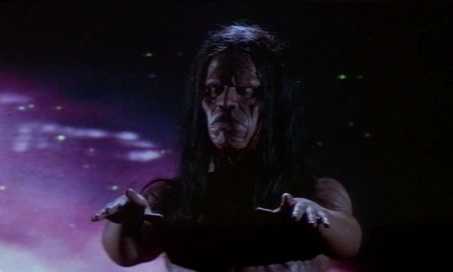 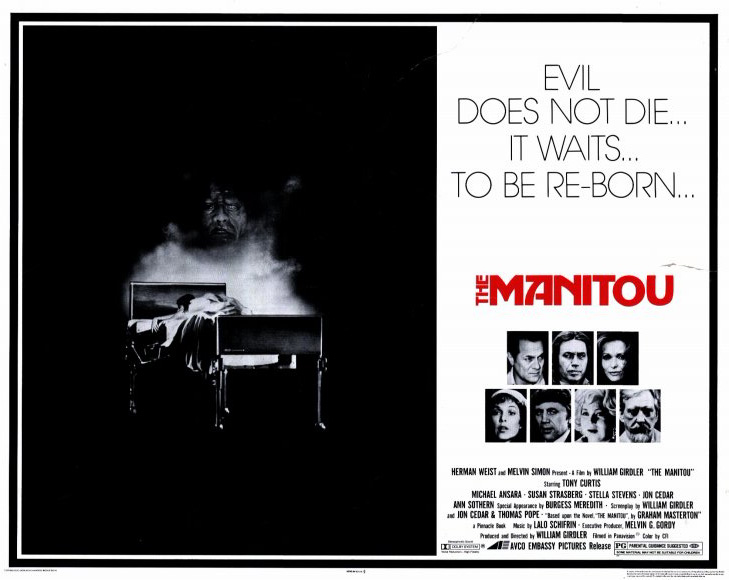 THE MANITOU is a singularity.  It’s nearly impossible to explain, mostly because any straight-faced attempt to recount the plot would be discounted as fiction by those unfamiliar with the film.  If you’ve never heard of it, if you’ve never seen it, you definitely wouldn’t be able to believe it.  But it does in fact exist.  There are DVD copies floating around out there.  Netflix has it.  It’s been something of a leitmotif over at chud.com.  The A.V. Club made a valiant effort to describe it, a few years back.  I will try to do it now, as long as you promise to resist having me committed by the time I’m done. 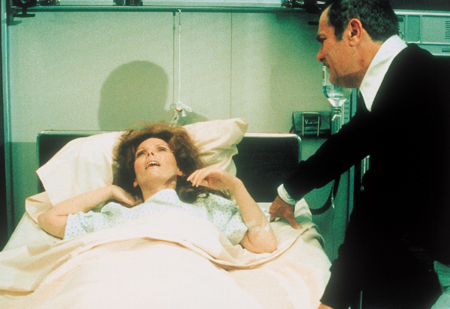 THE MANITOU was summoned into existence by DAY OF THE ANIMALS director William Girdler, and it features the late, great Michael Ansara in a supporting role as a mystical Native American type.  Old-Hollywood movie star Tony Curtis (SOME LIKE IT HOT, SPARTACUS, SWEET SMELL OF SUCCESS) plays the lead character, Harry Erskine, a low-rent psychic and proto-Peter Venkman type who doesn’t believe in any of the shit he’s selling.  When his sometime-girlfriend suddenly takes severely ill, Harry is confronted with a supernatural reality for which he is wildly out of his depth.  To be fair, anyone would be.  Let’s talk about what’s going on with Karen.

Karen has a growth on her neck.  It’s growing, fast.  While she sleeps, she speaks in tongues.  When the doctors try to remove the tumor, one of them gets temporarily possessed and attempts to mutilate himself.  The tumor is using its apparent psychic powers to protect itself.  What’s growing in there?  Sorry to tell you, but it’s a fetus.  Wait, don’t leave.

Medical science in the 1970s finds itself ill-prepared to handle immaculately-conceived neck-pregnancy.  Likewise, an acting role like this doesn’t come along every day.  As played by Lee Strasberg’s daughter Susan, the performance is certainly invested.  The easiest thing to compare it to is Linda Blair in 1973’s THE EXORCIST, a film whose massive financial success and cultural effects one suspects the producers of this film were seeking to emulate.  The only comparable film to THE MANITOU in my eyes, BASKET CASE, about a deformed Satanic evil twin the size of a basketball, was still four years away, so it’s safe to stick with THE EXORCIST as a point of distinction.  The creature growing in Karen’s neck is malevolent, at one point using its powers of suggestion in forcing an old woman to hurl herself down a stairwell, so it’s time for experts to be called in. 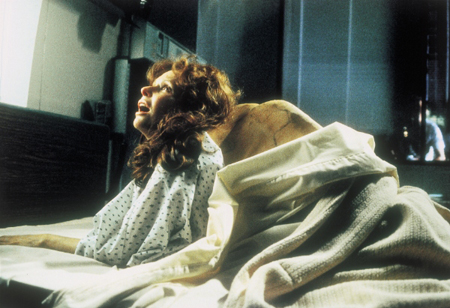 Just as THE EXORCIST‘s Father Karras turned away from doctors and sought out Father Merrin, so too does Harry Erskine look for specialists in this kind of unprecedented possession.  There is Stella Stevens (THE NUTTY PROFESSOR) as a gypsy with an unnatural tan approaching cultural insensitivity…

There is the great Burgess Meredith (ROCKY), apparently trying out his “flamingly gay Colonel Sanders” character he’d been playing around with in improv class… 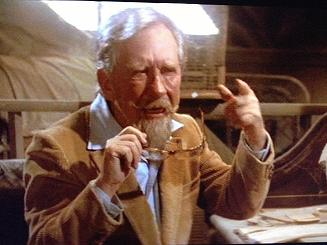 …And finally there’s Syrian-born Michael Ansara as Native American medicine man Johnny Singing Rock, in many ways the hero of the piece.  He’s the only one in the movie or outside of it who seems to have even the slightest inkling of a fuck what exactly is going on here, which makes him a hero in my eyes.  But in this kind of movie, of course, true to type, he’s only got exactly half the answers.  I can only take you so far, white man.

Unnatural forces are at work.  Try as he might, Johnny Singing Rock cannot stop what has already begun, and the creature he calls The Manitou is born. Having seen a three-foot-tall Native American nude monster be born from a woman’s neck, I can honestly say I’m one giant step closer to having seen everything. 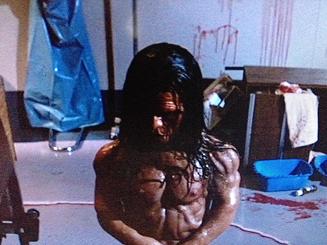 While he’s clearly one of the greatest short people in cinematic history, The Manitou is most certainly an evil villain, so Johnny Singing Rock does his best to contain it/him inside the hospital.  The Manitou’s terrible powers are only growing, and he creates an indoor blizzard.  Here’s another picture, because my critical faculties are fast crumbling now:

The final third of THE MANITOU is devoted to the epic battle between The Manitou and the tag-team of Harry Erskine and Johnny Singing Rock.  At a certain point the turn of events becomes quite literally indescribable, as the action somehow moves to outer space in a hallucinogenic sequence that I have no doubt is meant to recall the big box-0ffice hit from the year before — STAR WARS — all logic be infernally damned.  I mean it, there are like lasers and stars and everything. 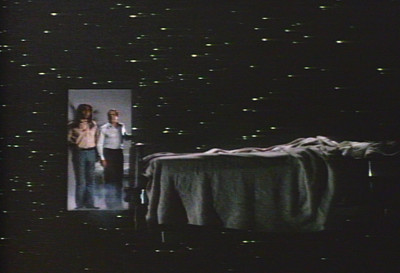 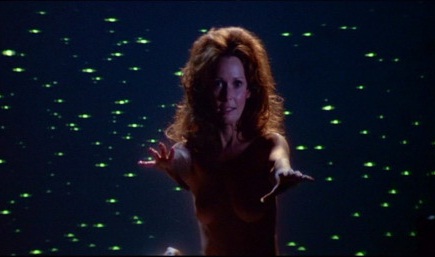 At this point in the movie, my brain melted, so I can’t tell you how, but I know the good guys won, or I think they did.  Either way, the film ends with one final fuck-you to your sanity, tossing up a title card insisting that everything you just saw is something that has happened in the really real world.

I’m sorry guys.  I’m speechless.  Where did this movie even come from?  THE MANITOU was originally a novel by Graham Masterton. After picking a copy in an airport, director William Girdler was determined to make it a movie.  Girdler wrote the script, along with Thomas Pope and Jon Cedar, the latter of whom plays a flummoxed doctor in the film, perhaps as a metatextual commentary on the story itself.  William Girdler is most famous in my world for directing 1975’s SHEBA, BABY, starring Pam Grier.  After THE MANITOU, he never directed again.  THE MANITOU was actually a hit, but Girdler died in a helicopter crash later that year. 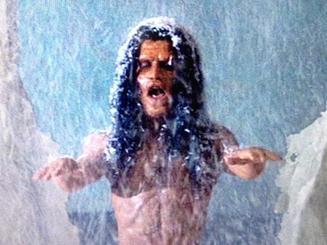 All those who have seen THE MANITOU end up obsessed, horrified, and fascinated with the very fact of its existence.  When Hollywood finally runs out of comic books, cartoons, and TV shows to adapt to film, their collective gaze may well turn towards this property.  Nicolas Cage as Harry Erskine and Peter Dinklage as The Manitou seems like the knee-jerk casting decision, although I’d just as soon see a remake that slots Danny McBride and Danny Trejo into those roles.  Then again, when I look at the picture above and notice that brow and that chin, I can only think of the star of Cheers, and not only because it gives me the chance to make a “Tiny Danson” pun.  Forgive me.  We are now in the realm of the cataclysmically bizarre, and humor is the last resort to maintain sanity in the face of describing the near-impossible.

THE MANITOU plays at midnight in Los Angeles, courtesy of the Cinefamily.

And when in Frankfort, Michigan, visit the manitou restaurant! 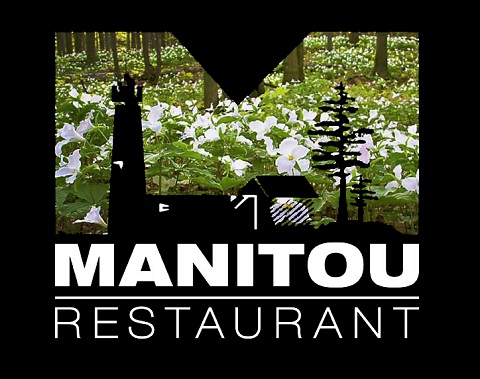