In this era of streaming, some days it just seems like there’s too much content to sift through.  Every year, there are so many low-budget genre pictures that slip through the fingers of fans the world over, simply because they’re not getting discovered by the people that would love them most. We all pine for the glory days of 42nd Street here at Daily Grindhouse or even the VHS boom of the early ‘80s, but where are the this generations crop of low-budget, sci-fi, horror, and action trash? Who has time to sift through all these films to find the real gems and moreso, who has time to read long winded reviews? It’s a daunting task, and it requires someone who loves genre cinema more than he loves his own words, and that person may be me. That’s why we’re going to be Keeping It 400 here at Daily Grindhouse: 400 word reviews that plainly and simply let you know if these films are worth checking out.

The Film: FIGHTING THE SKY 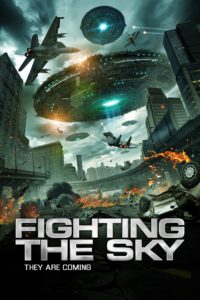 The Review: Director Conrad Faraj brings a light touch to FIGHTING THE SKY that elevates it from its low-budget, sci-fi brethren. Opening with a hillbilly earthling right out of CREEPSHOW having a close encounter of the third kind, the film owes a lot to the no-budget films of Baltimore’s Don Dohler (NIGHT BEAST, THE ALIEN FACTOR). The film crosscuts between a charming group of twenty-somethings led by Angela Cole and a crew of teenagers, both on a collision course with the alien invaders as well as each other.

The photography is standard issue low-budget genre style—flat, bright and sharp—but Faraj knows how to maneuver the camera, giving SKY some serious snap and pop. There’s an impressive sequence in library that’s as sharply shot as it is funny. The script has a certain delightfulness and sense of that humor, and Jinette Faraj as a precocious, alien loving teenager who uses trickery to snag a guide to extraterrestrials, leans into it.

The characters are good looking and likeable which makes the wait for the big reveal of the alien creature totally enjoyable. The mystery unfold slowly but is never dour or dull. There is a memorable sequence in which the team of alien experts disguise themselves as a documentary film crew—with Roger Conners seriously chewing scenery—to infiltrate a hospital in order to interview someone who has made contact.  The alien design itself is influenced by the classic “greys” design that has haunted UFO enthusiasts as well as the Visitors from the V mini-series and even a little bit of the titular monster from Doheler’s THE GALAXY INVADER. FIGHTING THE SKY also features some impressive daytime U.F.O special effects from Corey McCauley (TUSK, DON’T KILL IT) that are sure to delight fans of old-school sci-fi. The conclusion, featuring the evil aliens stalking our heroes through an abandoned lake house makes smart use of what this reviewer assumes is a sole alien costume, providing genuine edge of your seat thrills, and even a few chuckles.

FIGHTING THE SKY runs on charm and humor and impressively swings for the fences—particularly in the film’s final moments—despite its low-budget. There are solid, fun performances all around from the young cast and some good scares. FIGHTING THE SKY feels like a group of friends making a movie together on weekend—in the best possible way—with a devil may care attitude that makes it very easy to enjoy.