Dolph Lundgren stars in silly movies. Even back in the days when he was appearing as a heavy in studio movies and starring as the miscast hero in movies for Cannon Films, the end result was usually something so tonally bizarre, it could not be classified as good or bad. The combination of his muscular build, handsome yet menacing face, and thick accent made him impossible to cast convincingly. Unlike Arnold Schwarzenegger who was able to overcome the same issues through a self-deprecating sense of humor, Lundgren came across as surly and cold in his first decade as an actor. Yet despite his limitations as an actor, Lundgren has developed as a screen presence as he has aged. The last fifteen years have found him discovering a newfound sense of humor that makes his low-budget action and horror flicks more fun than they should be. Don’t get me wrong, he still makes silly movies, but there are pretty high levels of watchability and entertainment value within that silliness. DON’T KILL IT is a good example of this, even as its low budget holds it back in some glaringly obvious ways.

The plot by screenwriters Dan Berk and Robert Olsen is pretty ingenious. A demon possesses people, turning their eyes black and using their bodies to violently kill as many people as possible until someone kills the body it is in. It then goes into the body of the person who killed the previous possessed body, continuing the cycle of violence unstopped.

Into a small Mississippi town it makes its way, killing nine people within a week. The local police department is powerless to understand what is happening and Pierce (Kristina Klebe), the FBI Agent sent to assist, is not much more help. Into this mess of bloody violence and incompetent police work steps Jebediah Woodley (Lundgren), a grizzled (Is there any other kind?) demon hunter who has been tracking this particular demon for most of his life. In one of the better character bits in the film, Woodley explains to the Police Chief (Tony Bentley) and Pierce that they are not going to believe a thing he says before explaining in very long detail what they are dealing with. They respond, as Woodley predicted, by throwing him a jail cell. But after Pierce talks to a witness who describes the black eyes of the last body the demon possessed, she gets on board with Woodley’s explanation and half-baked plan to stop it. 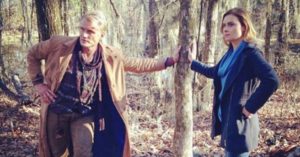 The premise gives director Mike Mendez plenty of room to stage scenes of bloody, over-the-top massacres as the demon walks into places where there are large gatherings of people, unleashes an otherworldly roar and starts the carnage rolling. There is an underlying joke about the prevalence of guns in the rural American South to these scenes as everyone—not just the cops—are packing heat, giving the demon even more opportunities to kill. I would never go so far as to say DON’T KILL IT is pro-gun control, but it is pretty hilarious that Lundgren, with his long career as an action movie star, is playing the only character that understands that guns are not the answer to this particular problem.

Lundgren appears to be having a ball playing an extremely chatty character (another sly comedic touch by Mendez is to give him so much expository dialogue) as he does his strange Swedish twist on a Southern accent. Lundgren may never be a great actor, but he has learned how to have fun and it translates here to a character he plays for comedy that in the past he would have simply played as a dour, violent thug. Dare I say he is evolving as a performer? Let me think about that.

If not for the over-reliance on bad CGI blood in some of the massacres (oddly, other scenes feature practical blood and gore effects), I would be recommending DON’T KILL IT without reservation. As it is, this low-budget short cut detracts from some of the fun of the film. What could have been a highly entertaining splatter film becomes a funnier-than-average star vehicle for Lundgren.

But even that measured recommendation is still a high mark in my book. It’s not art and it’s barely even a horror movie, but it is fun. And in the end, isn’t that all you can ask of a movie where Dolph Lundgren plays a demon hunter? 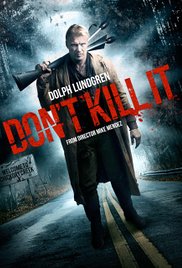