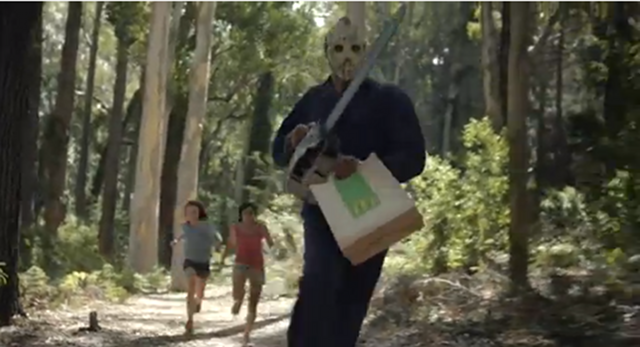 In these days of market saturation where a five second teaser is run for the two-minute trailer that will be released before the full red band trailer is released (and every online outlet runs a story on it), it’s hard to imagine there was a time when if you didn’t subscribe to Fangoria, an advertisement for a new FRIDAY THE 13th would take you by surprise.

It would usually happen to me while up watching SATURDAY NIGHT LIVE, Manfredini’s familiar score would ring out and then the hockey mask would appear. An ominous narration would warn that “these are Jason’s woods” and sense of dread would fall over me. Even as a the kid on the block who would bring around his latest horror finds to share with the gang, a late-night FRIDAY THE 13th commercial was enough to get under my skin, and maybe make me extra cautious crossing the alley to get back home before curfew.

YouTube user ShawnOfThe80s has posted two exhaustive collections of FRIDAY THE 13th commercials, trailers, TV spots, and news reports. Collected from what appears to be an assortment of VHS’s from all over America, some of the most fun bits come from the film’s showings on the local UHF station. Also in the collection is an interview with Kane Hodder (the first actor to play Jason more than once) from video magazine A CURRENT AFFAIR as well as a clip of Gene Siskel and Roger Ebert railing into 1984’s THE FINAL CHAPTER.

While most folks my age were too young to go see the latest Jason movie at the local multiplex (Ford City or “the Plaza” around the south side of Chicago) we would generally catch up with them on home video or a marathon on the USA Network or Joe Bob Briggs’ MONSTERVISION.

Gilbert Gottfried, Rhonda Shear, and even Commander USA held things down over on USA, but over on TNT (and The Movie Channel before that)  Joe Bob Briggs would bring viewers some of the best schlock every Friday night. Joe Bob Briggs is the pseudonym for John Irving Bloom, an alter ego that the film critic came up with to review the drive-in trash he was assigned when he was starting out.

Thankfully, YouTube user ReadNWatchAngalog has uploaded all of Joe Bob’s host segments from the “First Annual Dusk ‘Till Dawn Joe Bob Briggs FRIDAY THE 13th Marathon” that ran on TNT  on a Halloween night in the ‘90s. Briggs traces Jason’s evolution through FRIDAY THE 13th PART 6: JASON LIVES. The segments feature quite a bit of trivia presented throughout the clips with Briggs’ irreverent sense of humor (particularly on the subject of TNT’s censors), as well as his “Drive-In Totals” counting up the number of dead bodies.  However, there’s somebody in the studio making things difficult for the host… could it be Jason? 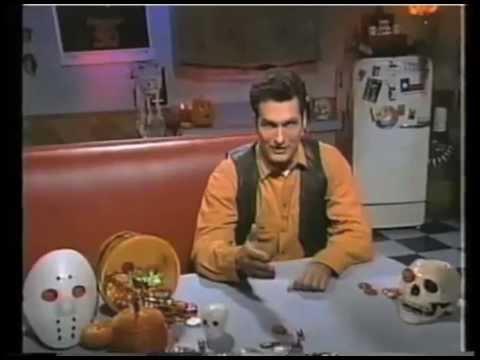 Two perfect ways to waste some time this Friday The 13th.