The increase in globalization giving us an influx of foreign horror films to check out and enjoy at the price of a ticket or click of a mouse brings such light to my spooky little heart, especially when they’re done by directors and writers who put so much of themselves and so much dedication into their work.

Picture one such person basing their project in their love for Morocco, add a musical backing akin to Danny Elfman, the moody and surreal atmosphere of a Del Toro film, and the command of slow-burning supernatural folklore of films like JU-ON, and you’ll get pretty close to the vibe of Talal Selhami’s ACHOURA. 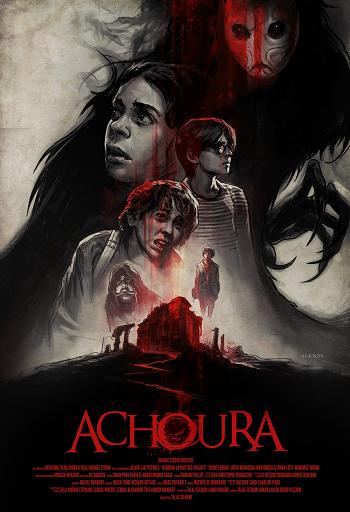 Taking place during the titular Moroccan children’s holiday, ACHOURA follows an evil spirit’s curse as it creeps through generations, consuming children at their happiest moment of the year to feast upon their joy and innocence to sustain its power, and the effect it has on the lives of four childhood friends: Nadia, Ali, Stéphane, and Samir.

As children, the four enter the abandoned home that serves as the abode for the spirit’s vessel, and at the end of the evening only three make it out. With Samir kidnapped, the three remaining friends make a pact to never forget what happened, and to never stop searching for Samir. Stéphane accomplishes the former with his horrific artwork, Ali with his aggressive and almost obsessive detective work, only Nadia seems to have forgotten both and throws herself entirely into her work as a teacher and into her and Ali’s young son, straining her relationship to both men and opening them all to disaster as the spirit is once again unleashed upon the Moroccan children.

If this gives off an IT vibe to you, you wouldn’t be far off the mark. Like IT, we follow kids traumatized by an evil, child consuming entity from their youth through their broken adulthoods and eventual secondary confrontation. There is a lost companion, a pact to never forget, and a specific span of time that the spirit is active per cycle. What sets it apart is, in part, an almost laser focus on the personal lives and struggles of the individual characters as opposed to IT‘s group POV, giving greater insight into the motivations and long term suffering of the friends in facets other than the lurking evil spirit. There’s also a wonderful set of atmosphere and mood offered up by not only the setting; but by the respect, love, and care imparted to it by Selhami that keeps it from being a caricature/cultural pastiche for foreign voyeurs that some films suffer from. You can feel the dedication to a genuine view of the country, its people, and its culture both youth and adult, present and past, and it makes it truly special to watch.

That said, that laser focus on specific character work is ill served by sometimes vague character moments and interactions, including a love rivalry that is hinted at and built up in flashback and slightly more in the present but never really confronted or resolved in a satisfactory way. The character with the most amount of screen time, Nadia, is also in some cases the most wooden or dull and I found myself missing the characters of Stéphane and Samir, whose personal journeys and torment gave a taste of some fascinating character growth and work, but never really more than a taste.

Even with that drawback, ACHOURA delivers on entertainment, genuine suspense, and a new cultural twist and viewpoint on the childhood friend drama so popular now with things like the aforementioned IT remake, as well as Stranger Things. If you’re itching for more of the same flavor, or if you’re looking for a generally well made foreign film with loving attention spent on the creator’s home country, ACHOURA is more than a safe bet for an enjoyable time.