Long before this current rise of Marvel-mania on the silver screen, Albert Pyun threw his own shield into the ring with his 1990 flick CAPTAIN AMERICA, starring Matt Salinger as everyone’s favorite unfrozen patriotic soldier. Shout! Factory, no stranger to introducing obscure genre flicks to a new audience in a shiny new format, has announced that they’ll be bringing the flick to eager fans – hopefully the fact that Steve Rogers is no longer portrayed by The Human Torch will not cause any confusion. 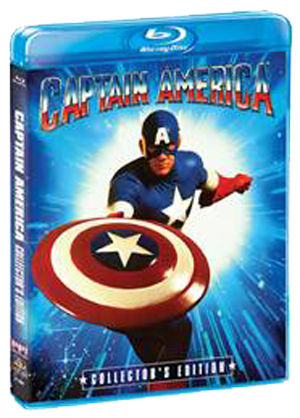 Let’s go to the press release!:

Steve Rogers happens to be the best candidate out of six hundred volunteers. He has the power to save millions. Only he could defeat a superhuman madman. But saving the world let him trapped in an icy grave until fate released him to finish a battle that started decades ago. Now an evil genius in on the verge of global domination and only Captain America can stop him! On May 21, 2013, Shout! Factory will unleash the long-awaited 1990 action sci-fi movie classic CAPTAIN AMERICA, starring Matt Salinger (What Dreams May Come), Ronny Cox (Total Recall, RoboCop), Ned Beatty (Toy Story 3, Superman), Darren McGavin (The X-Files), Michael Nouri (NCIS, Damages) and Scott Paulin (Castle, JAG), in a special Collector’s Edition Blu-ray™.