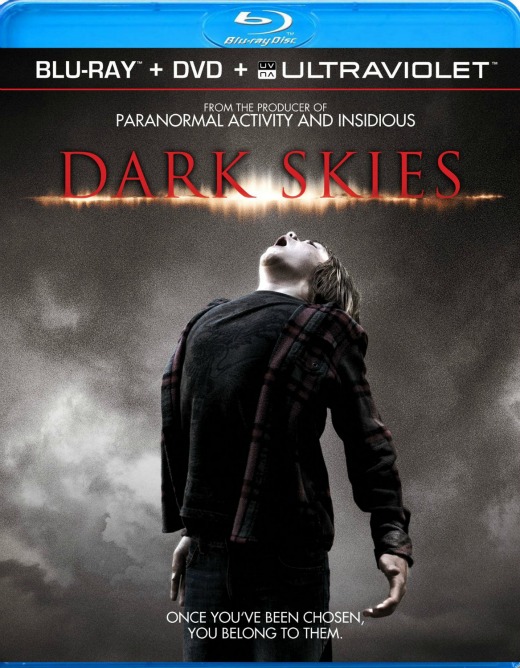 BEVERLY HILLS, CA – This May, Anchor Bay Entertainment and Dimension Films will unleash the supernatural thriller DARK SKIES on Blu-ray™ and DVD. From the producer of Paranormal Activity, Insidious and Sinister, DARK SKIES is a chilling film about the existence of evil and the strength it takes to fight its insidious attack. Hitting retail on May 28th, DARK SKIES will include a feature commentary and will be available for an SRP of $39.99 for the Blu-ray™ Combo Pack and $29.98 for the DVD.

DARK SKIES stars Keri Russell (August Rush, “The Americans”) and Josh Hamilton (The Bourne Identity, J. Edgar) as a young couple with children living in the suburbs. As husband and wife, Daniel (Hamilton) and Lacy Barrett (Russell) witness an escalating series of disturbing events involving their family, their safe and peaceful home quickly unravels. When it becomes clear that the Barrett family is being targeted by an unimaginably terrifying and deadly force, Daniel and Lucy take matters in their own hands to solve the mystery of what is after their family. DARK SKIES co-stars Dakota Goyo (Rise of the Guardians), Kadan Rockett (The Fortune Theory) and J.K. Simmons (Spider-Man franchise, Juno) as paranormal expert Edwin Pollard. DARK SKIES was written and directed by Scott Stewart (Priest, Legion).

DARK SKIES explores the dynamics of family, psychology and humanity as a household unites against an enigmatic menace. Is there still time to overwhelm this ominous force, or has “the invasion already happened?” DreadCentral.com’s Heather Wixson called DARK SKIES “a terrifying, mind-bending thriller.” Avi Offer at NYC Movie Guru said “Sci-fi at its chilling best. A terrifying, suspenseful and jolting experience.”

ABOUT THE WEINSTEIN COMPANY
The Weinstein Company (TWC) is a multimedia production and distribution company launched in October 2005 by Bob and Harvey Weinstein, the brothers who founded Miramax Films in 1979. TWC also encompasses Dimension Films, the genre label founded in 1993 by Bob Weinstein, which has released such popular franchises as SCREAM, SPY KIDS and SCARY MOVIE. Together TWC and Dimension Films have released a broad range of mainstream, genre and specialty films that have been commercial and critical successes. TWC releases took home eight 2012 Academy Awards®, the most wins in the studio’s history. The tally included Best Picture for Michel Hazanavicius’s THE ARTIST and Best Documentary Feature for TJ Martin and Dan Lindsay’s UNDEFEATED. THE ARTIST brought TWC its second consecutive Best Picture statuette following the 2011 win for Tom Hooper’s THE KING’S SPEECH.

Since 2005, TWC and Dimension Films have released such films as GRINDHOUSE; I’M NOT THERE; THE GREAT DEBATERS; VICKY CRISTINA BARCELONA; THE READER; THE ROAD; HALLOWEEN; THE PAT TILLMAN STORY; PIRANHA 3D; INGLOURIOUS BASTERDS; A SINGLE MAN; BLUE VALENTINE; THE COMPANY MEN; MIRAL; SCRE4M; SUBMARINE; DIRTY GIRL; APOLLO 18; OUR IDIOT BROTHER; I DON’T KNOW HOW SHE DOES IT; SARAH’S KEY; SPY KIDS: ALL THE TIME IN THE WORLD IN 4D; MY WEEK WITH MARILYN; THE IRON LADY; W.E.; CORIOLANUS; UNDEFEATED; THE ARTIST; BULLY; and EASY MONEY. Currently in release are THE MASTER; THE INTOUCHABLES and LAWLESS. Upcoming releases include KILLING THEM SOFTLY; THIS MUST BE THE PLACE; SILVER LININGS PLAYBOOK; and DJANGO UNCHAINED.