Home  ⁄  The Wire  ⁄  APOSTLE Is A Slow But Brutal Cult Thriller

Gareth Evans knows violence. The Welsh filmmaker broke through to audiences with his beloved pair of RAID films, balletic blood operas that allowed Indonesian martial arts star Iko Uwais to go HAM on a slew of oncomers in displays of bone shattering athletic prowess. Then there was his “Safe Haven” segment of V/H/S 2, which shot its found footage docu madness into the depths of a death cult readying itself for a monstrous gore apocalypse. Evans’s films drip with crimson smears and torn flesh, and he directs all this gnarly splatter with heart-stopping visceral intensity.

So it seems, at first, that APOSTLE is a complete 180 for the filmmaker, as if Evans has burnt out on the pulped out human bodies and decided to explore a different kind of cinematic intensity. Let’s not beat around the bush here: the first hour or so is slow. There’s a methodical nature to Evans’s direction that can charitably be called “world-building” but that some people may prefer to call “dawdling”.  APOSTLE runs a little over two hours long, and it feels like a half an hour or so could be lopped off, as Evans takes his time getting us to know the inhabitants of a  rural religious community who have set up their own mud-caked community on a remote island.

Of course, those who check out too early will not find out that Evans can let his flare for the ol’ ultraviolence be repressed for long. Dan Stevens stars as Thomas Richardson, a laudanum-addicted ex-Christian missionary who’s recruited by his estranged father (or, at least, representatives for his father’s financial interests) to travel to Erisden, a rogue religious community who have kidnapped his sister, Jennifer, for a ransom. Everyone thinks Thomas is dead– and, certainly, his relationship with his father is, but Thomas’s bond with his sibling is eternal. So he’s asked to go undercover, acting as new acolyte to the strange farming cult’s teachings, as he looks for his sister in the process.

As Thomas insinuates his way into the community, he begins to flirt with Andrea (Lucy Boynton), the daughter of the charismatic town leader and self-styled prophet, Malcolm (Michael Sheen), while making an uneasy alliance with a young teen boy who breaks curfews to sneak off with his secret girlfriend for nightly trysts.Thomas, despite his gruff an obvious “leave me alone” demeanor, is quickly welcomed into the community, even earning the trust of Malcolm during a tense interrogation of all the new men to the island in order to suss out a suspected intruder.

It’s at this point that Evans can no longer resist letting his action director impulses from popping out, indulging in a short but effectively brutal fight sequence that ends with someone’s body skewered on pikes. It’s a palate cleanser to a good hour or so Erisden world building, immersing us into the muddy farm work, strange rituals and fiery sermons of this makeshift township. There’s a WICKER MAN vibe to all this, as Thomas sneaks around and is introduced to several of this insular world’s bizarre customs (why do they leave jars of their blood outside their bedroom door every night?) and presenting a seemingly idealistic progressive, anti-capitalist commune far away from the blighted fundamentalism of Mother England. It’s hard not to admit that these early are kind well…dull, with a mopey Stevens spending most of the time frowning at this new land he’s found himself in. There’s a bit of teelvisual cheapness to these early scenes as well, only slightly offset by some ravishing scenic photography, and the plot seems to be heading into the direction of a thousand other “stranger in a strange land” movies about outsiders in the realm of sadistic religious cults, only with Evans taking his time in drawing out this dirt-smeared mystery.

But maybe that’s just there to starken the difference when Evans finally goes hog wild with the kind of  karo-syrup soaked violent madness that is his stock and trade. What starts off as slow-moving dark drama quickly turns into a horror movie, and then an action movie, than an indescribable batshit insane descent as Thomas begins to fall too deep and the truth of the community comes out. There are some initially dodgy politics in the early stretches of this film, where you begin to wonder if Evans is simply indulging in some rather conservative leanings and demonizing the radical humanistic philosophies of Malcolm’s hardy people.

But that’s not the game Evans is playing and it eventually becomes clear that it’s religion itself, whether brutally fundamentalist or left-leaning in its for the people arguments, is the real enemy and our Gods must die. Malcolm and his merry band of vicious enforcers are raging hypocrites, preaching the evils of money while kidnapping a girl for the ransom, but that doesn’t mean that Thomas’s devout upbringing is any better, leaving the poor, stoop-shouldered man the physical and emotional scars to prove it.

There’s a chewy (barely) subtext at the core of APOSTLE that is more thoughtful than the limb-shredding fisticuffs of Evans’s previous efforts, but by the end of the film, he’s painted the wood walls of this muddy community scarlet. Once the film actually begins to abandon its feints toward slow burn respectability and lets loose, it really gets cranking, unleashing an unholy, apocalyptic barrage of torture, death and absolute weirdness. It’s absolutely vicious, and shows that Evans isn’t about to abandon his gnarl nastiness anytime soon. 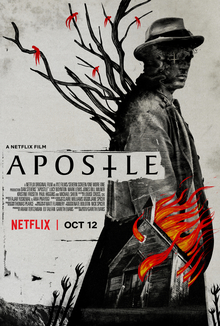