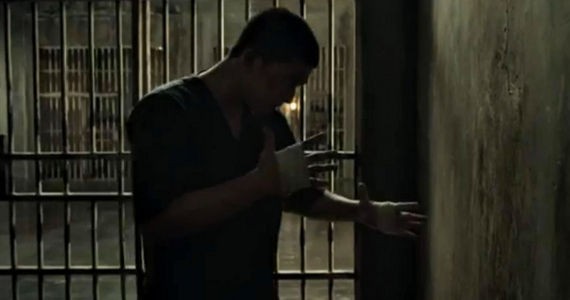 Having rewatched this movie this afternoon in a haze of antibiotics, I expanded my thoughts on THE RAID 2 from the short piece I rifled off on it in my Blu-Ray column, which was posted on DG earlier this week.

Gareth Evans is a new action director to take very seriously: He’s growing into a world-class directing talent, in my opinion. 2009?s MERANTAU was plenty promising, an able showcase for both star Iko Uwais and for Uwais’ specialty, the Indonesian martial art pencak silat. 2011?s THE RAID: REDEMPTION delivered and then some. It was one of my top five films that year, as much as that distinction matters. Evans’ next directorial credit after THE RAID was ‘SAFE HAVEN‘, the piece he co-directed with Timo Tjahjanto for the anthology V/H/S/2. It’s a bolt of scarcely-restrainable horror electricity. All on its own, SAFE HAVEN made my top two last year. Evans’ style has potency, a rare quality among younger directors, especially those working in the genres of action and horror. As genre directing has trended towards the over-use of hand-held camerawork, much has been lost in the crucial areas of clarity, continuity, and identification — if I can’t entirely see what’s happening or who it’s happening to, it’s harder to stay involved on any level. By contrast, Gareth Evans creates immediate empathy in an audience for unfamiliar actors playing characters who only just appeared onscreen a moment ago. Through smartly-chosen camera angles and clever deployment of tactile elements and technical arts like sound, Evans creates believable environments with simple strokes: The scrape of a metal bat on a concrete sidewalk, the slow juicy slice of a golden scalpel through a human neck, and so on. These small details have heft, which accumulates and enriches the texture of the film terrifically.

As a cinematic storyteller, Evans can really put you in a room, usually a room you don’t want to ever be in — think of the early scene in the first RAID where the villain murders a row of captives only to run out of bullets before the last; how much you feel for that final man despite not even knowing his name. There’s a similar scene in the new RAID film. The bit still works. You can imagine how excruciating it must be to be the last man on the row. You can see yourself in his quivering place. What would you be thinking, if put in that position? What last thoughts might you choose? This is what this director can do with a day-player who never gets a single line of dialogue. He makes you feel for the cannon fodder. Evans’ approach to action is elemental, his approach to 2-D visual storytelling is tangible. These films don’t need a third dimension — the directorial orchestration provides it.

So everything that was so effective about the first RAID film works about the sequel. The key word is “more.”

THE RAID 2: BERANDAL is nearly an hour longer than its predecessor, with twice the characters and a more complex storyline, such as it is. The closest imagining is what would happen if John Woo made THE GODFATHER: PART TWO, minus the sumptuousnous and grace. It’s a back-alley HARD BOILED. This is a seedier neighborhood. The knives are sharper. Heads don’t get knocked around, they get pulverized into a red mist. Where the earlier RAID film showed the events of one particularly arduous day, the sequel covers a longer expanse of time. Whereas the earlier scenario was confined to one building, THE RAID 2 opens up the action. There’s a car chase now. There are subways. There are rivers and lakes and ruins and killing fields. The villains are even more vicious this time around, if that can be believed. The redoubtable Yayan Ruhian, so indelibly fearsome as “Mad Dog” in the earlier film, plays a similar role here, only to be overcome by the new breed of vicious killer. Evans’ Jakarta is no country for old mad dogs.

There’s even a bit more black humor in the sequel, much of it courtesy of the silent siblings Hammer Girl and Baseball Bat Man, the film’s signature characters. (Better to experience those two without benefit of much foreknowledge.)

The end result of all this “more” by film’s end may be a faint sense of exhaustion, even among die-hard fans of THE RAID like myself. For my part I’m all RAID-ed out. “I’m done,” as series hero finally concludes. These are arduous films — for the viewer alone! One can only imagine how it feels for the active participants. Don’t get me wrong: I love THE RAID 2 and it’s clearly one of the superior action films of the year. It’s only that I’ve been through a long onslaught of fists, bullets, stabbings, and hammerings and now I’d like to see what this gifted filmmaker and his dedicated crew can do next. A third RAID film is planned; hopefully after that there’ll be a return to horror. Or a monster movie. Or a Western. Or a musical. The sky’s the limit, really.