Often when a film is successful, it will accidentally spawn several other attempts to cash in on its success. Usually when this happens, the filmmakers don’t understand what it actually was that made the successful film great. In the mid-nineties, it had been CLERKS and PULP FICTION that everyone tried to copy, and to a certain extent, it worked. Mostly meaningless movies had become peppered with clever dialogue that sort of mirrored the writing of Quentin Tarantino and Kevin Smith. While it did affect the numbers on the box office receipts in a positive way, it wasn’t the clever dialogue that made those original films great. Guy-Roger Duvert’s VIRTUAL REVOLUTION seems to be inspired by BLADE RUNNER, THE MATRIX, INCEPTION, and possibly READY PLAYER ONE, yet it retains almost none of those films’ quality. 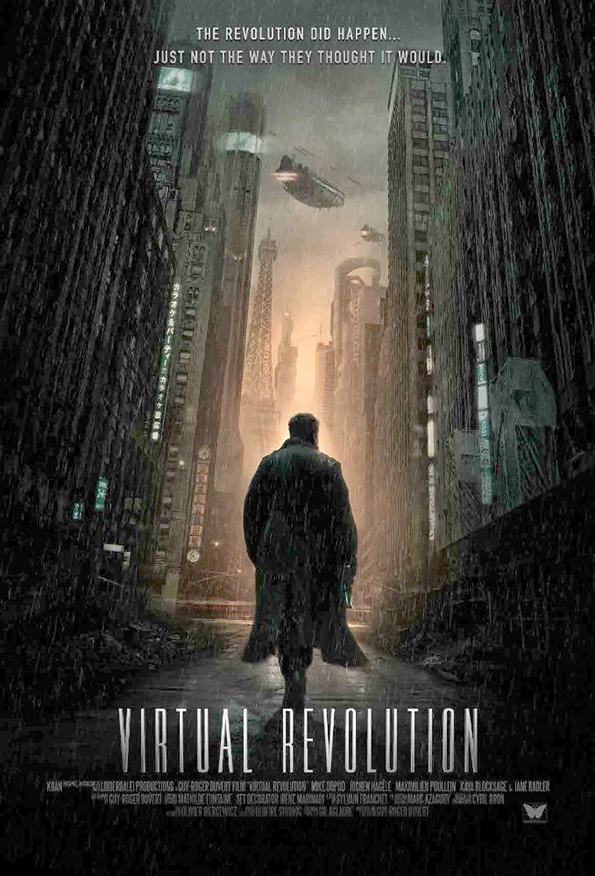 In the year 2047, most of the world’s population lies dormant as their minds run free in a do-anything/ be-anyone virtual world. After nearly 200 of these “gamers” are killed by a terrorist group that calls themselves “The Necromancers,” Mike Dopud’s Agent Nash is hired to put a stop to them. After losing the love of his life a few years back to a similar attack, Nash spends about half of his life in this imaginary dreamland. He then proceeds to use this dreamland to infiltrate the organization by killing a member and taking their place in what seems to be a post-apocalyptic reality. In a somewhat masturbatory scenario, he then wakes up as a naked woman in bed with two other naked women before he can begin his intrusion into The Necromancer’s plan. This plan apparently involves freeing the population from the imaginary world that no one actually wants to leave. As good as their intentions might be, what’s the point of upsetting billions of people by jarring them back into reality? There seems to be something of a parallel being made by the writer between this imaginary dreamland and the current smartphone culture that so many people speak out against these days. For better or worse, this is the world we live in, and no one really wants to go back to the “dark ages” of unconnectivity and lack of instant information. 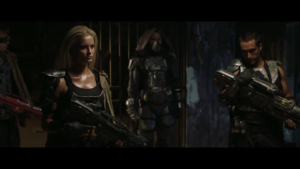 The scenes that take place in the real world don’t so much invoke the lighting and cinematography of the original BLADE RUNNER… Rather, they copy it nearly exactly. Every set seems to have that look of a dark noirish room with light pouring in through the mostly-shuttered windows. While this may be a cyber-punk’s wet dream, it’s highly derivative and entirely unoriginal. I remember reading how director Denis Villeneuve had no intention of copying the look of his sequel BLADE RUNNER 2049 from Ridley Scott’s original film. He brilliantly achieved creating his own look while still appearing to exist in the same world of the first movie. In VIRTUAL REVOLUTION, the photography is practically an exact copy of that film. If most of the population stays indoors while connected to their own personal dreamland, then how come every time Nash looks out his apartment window, we see rows and rows of flying cars like rush hour traffic on amphetamines? When we’re in the virtual world, it comes across as either bad medieval cosplay or a SyFy Channel post-apocalyptic made-for-cable film. Neither fit in with anything else in the movie. If there had been some point the filmmakers were trying to make via a reference of contrast, I could see the other scenes working. Alas, there doesn’t seem to be one made. 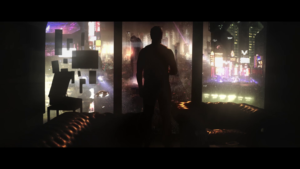 While I do appreciate the film’s “leave well enough alone” message, VIRTUAL REVOLUTION’s highly derivative style and lack of imagination leaves much to be desired. Even last year’s GHOST IN THE SHELL adaptation had more to say and said it in a much more compelling way and I didn’t even really LIKE that movie. When even a crappy trilogy like THE MATRIX is more imaginative than new “original” science fiction, I would say the genre is in trouble.