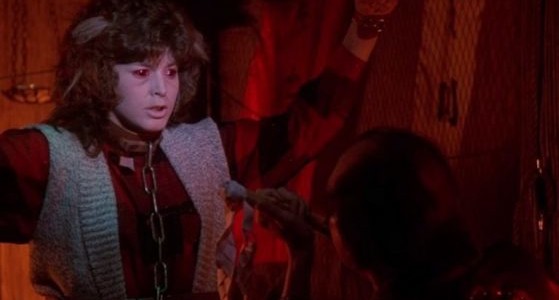 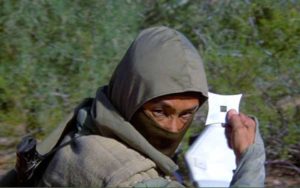 I love Cannon Films, but unlike most loves, I am not blinded to their faults. I recognize that a good seventy-five percent of their output was objectively…not good. Still, even with that understanding, when I see the “A Golan-Globus Production” credit come up, I get a little thrill of expectation that what I am going to see has the potential to be so batshit crazy that all ideas of good and bad get thrown out the window. NINJA III: THE DOMINATION is a perfect example of that kind of film that defies anything resembling traditional film criticism.

Considering the fact that beloved, prolific indie schlock producers Menahem Golan and Yoram Globus latched hard on to the short-lived ninja subgenre in the early to mid-’80s, it is hard to know which franchise NINJA III is intended to belong to. Both ENTER THE NINJA starring the great Franco Nero and the AMERICAN NINJA series of films featuring Michael Dudikoff were under the umbrella of Cannon Films, so even I had a hard time trying to untangle the knot of ninja films to understand where NINJA III fit into the continuity of a series. It turns out the film was intended as the third in a loose series of ninja films featuring martial artist Shô Kosugi (playing different characters in each one and also operating as the fight chorographer) following ENTER THE NINJA and REVENGE OF THE NINJA. But the films do not follow each other in any form of continuity, so feel free to jump into NINJA III with both feet. 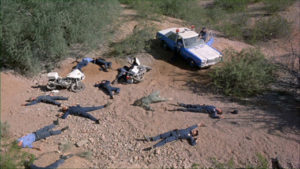 NINJA III wastes no time getting down to business. A ninja (David Chung) assassinates a scientist of some importance on a golf course in Phoenix, AZ. (Why Phoenix? The film never answers that question and frankly, I don’t care.) In the aftermath, the ninja kills approximately fifty bodyguards and police officers in a well-staged, over-the-top action sequence that finds him punching through the roof of a police car, hanging from a helicopter, killing motorcycle cops with throwing stars, and slicing and dicing with a sword. After finally being surrounded, the ninja is mortally wounded in a hail of gunfire from several cops.

The dying ninja staggers into the desert where he is found by Christie (Lucinda Dickey), a telephone line repairwoman and aerobics instructor (it is the early ’80s, after all). The ninja gives her his sword and says something in Japanese to her while looking into her eyes before he finally dies. Unaware that the ninja has managed to somehow place his soul in her body, Christie begins dating Billy (Jordan Bennett), one of the police officers (and a potential werewolf—you’ll know what I mean when the scene happens) who took part in gunning down the ninja. 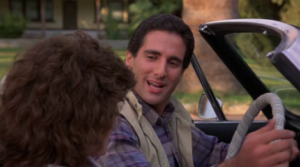 From that already goofy jumping off point, NINJA III goes into ever more outlandish territory that includes floating swords, light shows (complete with a video game console beaming a laser pattern across Christie’s face), apparent poltergeist attacks, a sex scene between Christie and Billy that involves the use of V-8 Juice (seriously), and Christie murdering the cops responsible for the ninja’s death while under his spell. Amidst this chaos, there is a plot about Yamada (Kosugi), another ninja, who travels to Phoenix to exorcise the evil ninja from Christie’s body. Got all that? 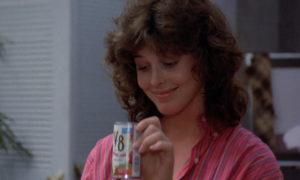 Director Sam Firstenberg and screenwriter James R. Silke (both worked on several of Cannon’s ninja films) deserve all the credit in the world for managing to not only keep the film’s plot semi-coherent, but also for including an action sequence every five to ten minutes and scenes that come close to being wholesale ripoffs of everything from THE EXORCIST to FLASHDANCE and POLTERGEIST. This sort of kitchen sink filmmaking style could be exhausting, but through a miracle of good casting combined with a refusal by Firstenberg to slow down the pacing, the film achieves a heady level of entertaining absurdity. 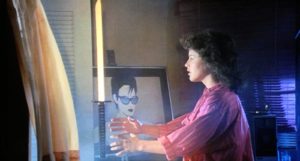 Despite a few obvious sets and some rough acting by a couple of bit players, NINJA III also avoids the cheap feel of a lot of the early ’80s Cannon films. Much of this goes to the excellent stunt work on display and the committed performances by Dickey and Bennett, but also the fun, comic book look created by the production team. The vivid colors associated with the early ’80s really pop in the excellent new 4K transfer. This new transfer also really accentuates how fluid the cinematography is in the action scenes. For all the silly plot points, genre mash ups, and plain old logical incoherence that makes up much of the story here, Firstenberg, Kosugi, stunt coordinator Steve Lambert, and cinematographer Hanania Baer actually do create a pretty kinetic action movie that is technically superior to most of Cannon’s output. 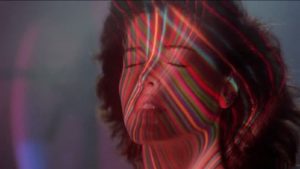 NINJA III is basically a lark, but everyone involved seems to be having a blast. Even the normally stone-faced Kosugi manages a light moment or two. If you take just a second to think about the film, the story completely falls apart. Thankfully, the tonal insanity and commitment to bulldozing over any bit of storytelling logic that gets in the way keeps the film loads of fun. And really, shouldn’t fun at all costs be the goal of any movie that brings together the ninja and demonic possession subgenres? 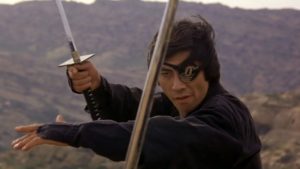 In addition to the new 4K scan, Scream Factory has given NINJA III a pretty impressive set of bonus features. A fun commentary track with Firstenberg, Lambert, and moderator Rob Galluzzo has been ported over from the previous 2013 Blu-ray/DVD combo release of the film, but is well worth listening to, as the filmmakers really do seem excited about what they pulled off on such a tiny budget. There is a separate audio track that features the original score and interviews with production designer Elliot Ellentuck and co-composer of the score Misha Segal.

Dickey, Bennett, and stuntman Alan Amiel are interviewed in separate featurettes that are entertaining as the three of them look back on a film they cannot believe was made and holds up today as a cult classic. Not surprisingly, Dickey claims that she was on set for a week before finally getting a look at a completed script. But I was a bit taken aback that Bennett would claim to be the one to have come up with the V-8 sex scene (despite Firstenberg claiming in the commentary he was the one responsible). If I’m either man, I don’t want ownership of that idea. 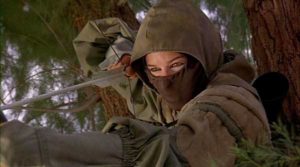 Josh Olson is on hand to do an entertaining Trailers From Hell look at the NINJA III theatrical trailer. The regular trailer and film stills make up the rest of the bonus materials on the disc. Given the fact that having a movie as bonkers as this one on Blu-ray should be special enough as a barebones release, this collector’s edition is beyond generous. 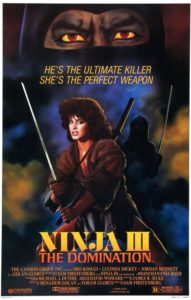