Every year the good folks at A&O Productions drop a 24-hour grueling marathon of b-movie goodness at Northwestern University in Evanston, Illinois. It’s a lot of fun, a lot of snacks, a lot of sleep deprivation, and a lot of geeks.

B-Fest is the real deal, and highly recommended. But please, for the love of Bonnie Franklin, take a fucking shower beforehand. 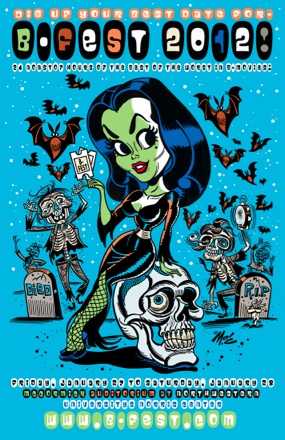 This is a fun flick to kick things off, and awesome with a crowd. Korea (no North or South, just Korea) and the USA pick their most elite Taekwondo fighters to compete for the ultimate prize – chocolate discs covered in gold tinfoil. I can (almost) buy Eric Roberts as a bad-ass, but Chris Penn as a martial arts expert is a stretch. That said, his line at the 11 second mark of the trailer clears his good name.

The Ted V. Mikels’ classic dropped next. A science experiment gone wrong results in a dude in an unconvincing mask going around killing beautiful women. Er, I mean a zombie. That dude in a mask is *totally* a zombie.

I’m sure most of you Bastards are familiar with the work of Uncle Ted. ASTRO-ZOMBIES is perhaps his most (in)famous flick, but that doesn’t mean it’s good. As a matter of fact, it’s pretty damn boring.

I’ve only got two words for ya: 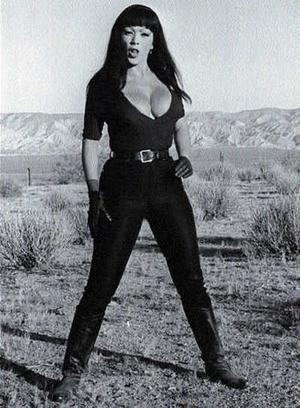 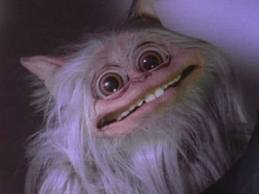 Next up came a turd made specifically for television: TO CATCH A YETI. As depicted above, the titular creature is half Mogwai and half demon-seed of Satan.

Basically, a “yeti” is mistakenly taken back to the United States in some poor slob’s backpack. A rich family wants the yeti for nefarious purposes, but a nice family actually loves the yeti. Said rich folks hire Meatloaf to hunt down and capture the yeti.

This movie broke a lot of folks at the Fest, but honestly, I just found it forgettable. I mean, TO CATCH A YETI can still suck me sideways, but it wasn’t enough to take me out.

A B-Fest staple. Watch it above.

Another B-Fest staple. Watch that good(?) shit above.

Another classic from Rudy Ray Moore. This time, he’s trying to get his nephew off drugs by any means necessary. The flick starts off with some good campy fun, but soon takes a serious turn regarding the perils of drug abuse. Highlights include nightmarish hallucinations, as well as Moore’s knack for wearing the flashiest duds. 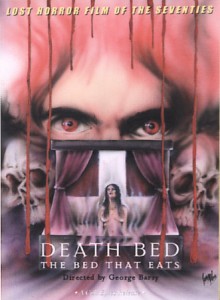 I wanted to watch DEATH BED, but instead passed out. Sue me.

Folks claim I didn’t miss much.

This is the shit right here, Bastards. A bunch of villainous vikings kidnap a beautiful girl in order to sacrifice her to an octopus puppet. Fortunately, Tarkan and his dog show up to kick ass and chew bubblegum – assuming they had bubblegum in Turkey back then.

I slept through this Andy Milligan classic. From what I heard, it was for the best.

Classic. An evil brain named Gor (from planet Arous, of course) possesses a brilliant scientist with the intent to – wait for it – take over the world. Fortunately, a good brain named Vol arrives to thwart him…by possessing a dog.

This is good shit, Bastards, but shit nonetheless. John Agar puts in the performance of a lifetime, and Joyce Meadows is pretty damn hot.

From DG favorite Brian Trenchard-Smith comes STUNT ROCK. This flick focuses on Grant Page, a rugged stuntman and #1 Fleetwood Mac fan (I’m assuming the latter). When not lighting himself on fire and jumping off buildings, Grant lends his talents to the rock band Sorcery and their elaborate stage-show – think Alice Cooper and GWAR, except replace anything cool with a goofy wizard and a devil that looks like a castrated Ronnie James Dio.

Never heard of it.

I watched the first ten minutes, then tried to find a place to charge my phone. There’s a bunch of chicks, some scandalous letters, a werewolf in the woods, and maybe some other stuff. Bronson Pinchot may have starred. I don’t remember. I do recall no shower scene a la REFORM SCHOOL GIRLS.

Watch that dull shit above.

A Don Dohler classic. An alien lands in redneck country, and must now avoid having his gat and/or egg stolen by hillbillies. This is a fun flick, albeit a ridiculously stupid one.

If you’re not familiar with Dohler’s work, you’re missing out. Sorta.

Watch that good shit above.

Tampering with radiation pisses off a giant octopus. Wackiness ensues.

However, we *are* talking about Ray Harryhausen, thus making the flick mandatory viewing.

That about wraps it up, Bastards. I expect to see more of you next year. If nothing else, I can throw down a Wet Willy while you’re trying to sleep through JUNGLE HELL.