In the mid to late ‘90s, there was a glut of films featuring wiseass criminal types, non-linear storytelling, and of course, an abundance of pop culture references and retro tunage. This era of Quentinsploitation came about due to the success of both RESERVOIR DOGS and PULP FICTION and while these films (which arguably weren’t written as direct rip-offs of Tarantino’s films, were certainly green lit as a result) mimicked the surface level attributes of the former video store clerk’s output, they lacked that deep knowledge of film that ranged from the grindhouse to the art-house. At their best, you got TWO DAYS IN THE VALLEY or GO, at their worst, you got BOONDOCK SAINTS. Good or bad, they were like a candy bar with a crunchy exterior that was missing the filling. Edgar Wright’s BABY DRIVER falls somewhere in the middle, recalling this era of filmmaking by showcasing plenty of crime thriller tropes, overly clever dialogue, flashy camera tricks and a healthy obsession with coffee, diners, and retro tunes, , but it’s ultimately a hollow experience. 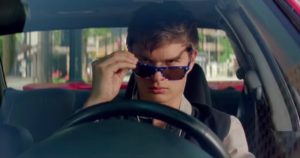 BABY DRIVER features Ansel Elgort as the titular Baby, a young man paying off his debt to crime boss Doc (Kevin Spacey) by working as his getaway driver on his various bank robberies. Baby is an impressive driver and is perpetually seen with a pair of headphones in his ears that help him drown out the tinnitus that has affected him since a childhood accident. Along the way the audience meets a slew of fast talking criminal types who spout out tough guy soliloquies such as Buddy (Jon Hamm), Bats (Jamie Foxx), and Griff (Joe Bernthal). As the film opens, the audience learns that Baby only needs to help the gang pull off one more job before he’s free and clear. Baby ends up meeting Debora (Lily James) a waitress at a diner whom the young criminal becomes smitten with. The two hit it off immediately, providing Baby with a purpose to go on after his life of crime will presumably come to an end.

BABY DRIVER’s script feels like Wright came up with a pretty good kernel of an idea—a getaway driver who scores his scores to the music on his iPod—and didn’t get much further than that. Instead of taking the time to craft a new wave take on heist films, BABY DRIVER strings together action beats, soundtrack cues, and potentially interesting characters with a lazy story; the characters are never clearly defined and neither are their motivations.The film is very precious about being a music lover, painting Baby as a very of the moment audiophile who collects vintage vinyl and recording equipment and while the soundtrack of the film features plenty of good songs, none of it seems particularly inspired. Baby’s habit of recording conversations and remixing them into songs sets up a plot point later in the film that will have audiences reacting “well, even I’m not that stupid.” 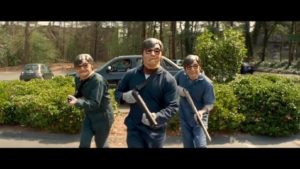 BABY DRIVER is quite frustrating because the driving scenes are impressively shot (although they don’t feature any cool cars, something that films of this ilk SHOULD do) and there is at least one terrific joke involving Michael Myers Halloween masks, as a whole the script doesn’t add up to a cohesive story. The laughs are few and far between and the women in the film—James as the waitress and Eiza Gonzalez as Jon Hamm’s love interest—are treated as little more than McGuffin’s, setting events in order while wearing cute little outfits and not given much else to do. The supporting cast turns in some good performances as crime story caricatures—Foxx as the loose cannon, Spacey as the father figure boss man—but Jon Hamm shines. with those good looks and natural charisma, which, by the third act twist that reveals him as a much more dastardly villain, it’s quite easy for the audience to sympathize with him and want to see Buddy emerge victorious. It’s a misstep in a script that feels like it needed one more draft. 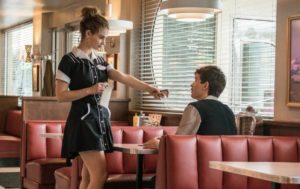 Crime stories like this are chock full of dirt bags, anti-heroes, and honorable thieves, but BABY DRIVER goes to great lengths to inform the audience that Baby isn’t as bad as these other guys, but he kind of is. It’s cloying and unfortunately inline with the rest of the script that feels like a teenage boy’s fantasy. Perhaps I’m a cynic, but a character that falls in love that quickly doesn’t seem romantic to me, it comes across as juvenile. The film gets into trouble when it shifts in tone from a brutal action film to a cutesy romance that doesn’t really work. Wright should have looked to Mann’s THIEF which painted a similar character in Frank who thought that having a wife and kid would put everything straight and learned that it doesn’t change a thing. The film’s script also seems to drop a gunfight in the middle (with a criminally underused Paul Williams) simply because there needed to be an action beat.

The film could have been improved with a more charismatic lead. Unfortunately Elgort doesn’t do much more than mope around like a lovesick teenager and doesn’t endear himself to the audience but it’s difficult to tell if that’s because of him or the script. He certainly is more boring to watch than any of his cohorts. Seeing his character bump into extras on the street because he’s not paying attention is sure to infuriate anyone who has been walking to work through a major metropolitan area. 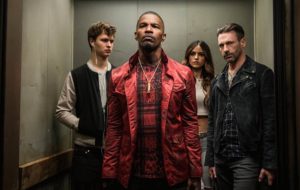 In the past, Edgar Wright has a displayed a knack for deftly balancing genre parody and reinvention: SHAUN OF THE DEAD took on zombie films, HOT FUZZ ‘90s action cinema, and THE WORLD’S END combined an alien invasion film with THE BIG CHILL. BABY DRIVER should be a clever dissection of man-with-no-name style action cinema in the vein of Walter Hill’s THE DRIVER and Nicolas Winding Refn’s neo neon-noir DRIVE, but a half-baked, juvenile script doesn’t bring any pathos to the flashy film. BABY DRIVER seems like a missed opportunity. All the pieces are there, but nothing really comes together. While there are some impressive action beats, the hollowness of the whole thing is overbearing. Plenty of great action films are shallow—take for instance the FAST AND THE FURIOUS series or Michael Bay’s ‘90s output—with on the nose, surface level drama, BABY DRIVER just feels like a sugary shell with nothing in side. It’s too cutesy to be Walter Hill-esque, too juvenile to be Mannsploitation, and not sleazy enough to be compared to Shane Black, but not original enough to be categorized as its own thing.