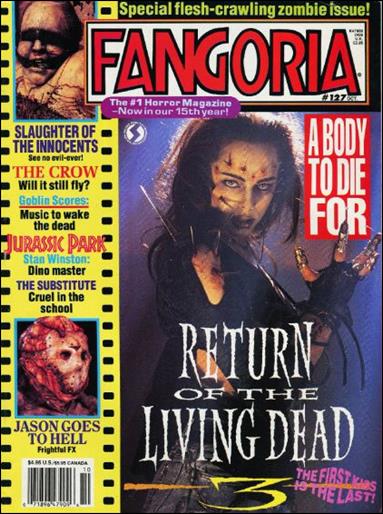 If you read DAILY GRINDHOUSE on an even semi-regular basis, the odds are good that you, just like nearly all of our contributors and editors—past and present, grew up on Fangoria. After watching that once-great giant of horror genre coverage slowly wither away over the last ten years, it is with great pleasure that I received today’s news that the Fangoria brand has been purchased and will be revived by Dallas-based media and entertainment company Cinestate.

On February 8, Heard Tell, the web site devoted to genre coverage owned by Cinestate, posted a brief notice announcing they were going “on an indefinite hiatus to allow our staff to focus their time and energy on new and exciting projects.” At the time I read that, I did not think anything of the notice. While I liked the work that Heard Tell was doing, it is not easy to stay on the radar in the over-crowded world of genre coverage and I assumed that harsh economic realities forced the site to shut down. Turns out they actually did have a very big “new and exciting project.”

According to today’s press release, Cinestate plans to not only revive the Fangoria web site, but also the classic print publication. In addition to the publishing and editing team brought over from Heard Tell, Fangoria contributors and editors from the magazine’s peak period of influence like Tony Timpone, Michael Gingold, and Rebekah McKendry will be on board as contributors and advisors.

The press release does not mention any timeline for when new content will be on the Fangoria web site or when the print magazine will be in publication. The Fangoria web site simply promises “New Blood” and the promise of being “Back in print where it belongs.” That is a sentiment I can get behind.

The full press release can be read below:

Cinestate’s asset acquisition of Fangoria set to resurrect the most prominent horror magazine to its glory days as a print publication.

DALLAS, TX (February 15, 2018) –– Fangoria Magazine is returning from its digital grave and back into print where it belongs. Thanks to a new investment, a new Editor-in-Chief, and a new Publisher, the world’s highest-profile horror movie magazine is reemerging as a collectible quarterly with the first issue set to drop this fall in time for Halloween.

Cinestate, the Texas-based entertainment company, completed the deal to acquire all the assets and trademarks of the Fangoria brand, including the magazine, from The Brooklyn Company. Cinestate CEO Dallas Sonnier diligently courted the previous publisher Thomas DeFeo for several months, with the two signing an agreement that turned over the rights to Sonnier & Cinestate.

Sonnier’s first move as the new Publisher was to hire his favorite film writer Phil Nobile Jr. as the Editor-in-Chief of Fangoria Magazine. Nobile comes to Fangoria from his role as Editor-At-Large for the website Birth.Movies.Death., and as a writer/producer for Stage 3 Productions in Philadelphia, where he created a feature-length documentary on John Carpenter’s HALLOWEEN. Nobile will also act as the Creative Director for the entire Fangoria brand.

“There needs to be a Fangoria,” says Nobile. “The magazine was a constant presence in the genre since 1979 – and then one day it was gone. That felt, to us, tragically incorrect. Fango was, for multiple generations, a privileged window into the world of horror. It gave us access to filmmakers’ processes and secrets, opened our eyes to movies we might have otherwise missed, and nurtured a wave of talent that’s out there driving the genre today. I’m proud and excited to be part of the team that’s bringing this institution back.”

As part of the arrangement, Cinestate controls all material from over 300 issues of Fangoria Magazine, including articles, photos, and exclusive interviews, spanning the past 39 years. The contents of the now-infamous Fangoria storage unit in New York, a veritable treasure trove of horror history collected over decades by former staff, has arrived at the Cinestate offices to be sorted and cataloged.

Nobile and Sonnier quickly approached and landed deals with popular Fangoria legends Tony Timpone and Michael Gingold to return to the magazine with their own columns, and to consult for the company. Additionally, the publication already has excited commitments from contributors including frequent Cinestate collaborator S. Craig Zahler (BRAWL IN CELL BLOCK 99), Ashlee Blackwell (Graveyard Shift Sisters), Samuel Zimmerman (Curator, Shudder), Grady Hendrix (PAPERBACKS FROM HELL), Meredith Borders (former Editorial Director of Birth.Movies.Death.), Rebekah McKendry (academic and horror historian), and Preston Fassel (whose project OUR LADY OF THE INFERNO is currently in development at Cinestate). Nobile shall further curate a diverse roster of voices for the new iteration of the legendary publication.

“We are fully committed to restoring faith in Fangoria with the horror fan community, so many of whom bought subscriptions, but never received their magazines. We have also been reaching out to previous Fangoria contributors to introduce ourselves and invite them back into the tent for future collaborations. This is a process, but we are confident in our ability to earn back trust and be good partners in a brand that personally means so much to so many awesome people,” states Sonnier.

Sonnier was able to complete the Fangoria asset acquisition and fuel growth in Cinestate by raising over $5 million of investment for his company. The primary investor in Cinestate is a member of a prominent Texas family that wishes to remain anonymous. As part of the deal, Cinestate also acquired the assets and trademarks to out-of-print publications Starlog and Gorezone.

A full staff is in place and operating from the Cinestate offices in Dallas, TX. Zack Parker, formerly of Shudder, joins Fangoria as the Director of Brand Management, along with Jessica Safavimehr as Associate Publisher and Ashley Detmering as Art Director. Nobile will be based out of New Jersey. The team is dedicated to putting Fangoria back where it belongs – in print.

“When I read Fangoria as a kid, it was a special ritual. I had to save up for it, and then I had to find it. And bringing it home ten times a year became a kind of sacrament, poring over every photograph on every page, reading that whole thing front to back, then doing it again,” Nobile says. “We want to restore that analog thrill to readers. We want to duplicate the excitement that I remember bubbling up around a new issue of Fango, put that excitement in an envelope and mail it to our subscribers. Fangoria is not something that competes with online blogs. Fangoria is not an algorithm. Fangoria is something you hold in your hands, something you spend a bit of time with in the real world. That’s what it was for decades, and that’s what we’re going to make it again.”

Cinestate will further develop Fangoria into a brand for producing movies and podcasts, as well as publishing horror novels. Cinestate VP Amanda Presmyk will head up production on a slate of Fangoria-presented horror movies that Sonnier will bring to the table for Cinestate’s new label.

Cinestate is currently in post on a gonzo reimagining of the PUPPET MASTER franchise, as well as Zahler’s next movie DRAGGED ACROSS CONCRETE for Lionsgate starring Mel Gibson and Vince Vaughn. Cinestate also published its first novel in January – Zahler’s HUG CHICKENPENNY: THE PANEGYRIC OF AN ANOMALOUS CHILD, which is being developed into a feature by Zahler, Cinestate and the Jim Henson Company.

Cinestate is a Dallas-based entertainment company founded by movie producer Dallas Sonnier (BONE TOMAHAWK, BRAWL IN CELL BLOCK 99) that seeks to improve upon the status quo in three key ways: cultivating mutually beneficial relationships with visionary creators who want to see their projects made faithfully and distributed widely; eliminating the arbitrary separation between the mediums of books and film; and minimizing unnecessary production costs while fiercely protecting our creators’ work.

For more information, check out Cinestate on social media – @cinestatement

At the height of its popularity, Fangoria Magazine was the most renowned horror publication in the world. Fangoria rose to prominence by running exclusive interviews with horror filmmakers and offering behind-the-scenes photos and stories that were otherwise unavailable to fans in the era before the internet. The brand would eventually rise to become a force itself in the horror world, hosting its own awards show, sponsoring and hosting numerous horror conventions, producing films, and printing its own line of comics. While the past decade has not been kind to the brand, Fangoria continues to remain an important part of the lives of filmmakers such as Quentin Tarantino, James Gunn, Eli Roth and many others, who look back on the “golden years” of Fangoria with admiration and reverence.