Home  ⁄  The Wire  ⁄  BARRY J. GILLIS BRINGING THE KILLING GAMES TO ANOTHER HOLE IN THE HEAD FILM FEST IN SAN FRANCISCO

The latest film from Barry J. Gillis (THINGS) is about to unleash all kinds of cinematic debauchery on the world stage. His latest film, THE KILLING GAMES, should come with a “certified cult” sticker like an Angus Beef burger at McDonalds. Every week we see filmmakers trying their best to make a genuine cult film, not realizing that it is that precise conscious effort that is preventing them from realizing success. In walks Gillis who doesn’t even have to try. Each film from the warped mind inside ol’Barry’s noggin’ is always a trip to crazy town, and we wouldn’t have it any other way. The latest film from Gillis and crew hits the Roxie Theater in San Francisco on December 1st. It was deemed “too violent for The Edmonton International Film Festival” but it will be right at home in the city by the bay…

Here’s the skinny from the press release: 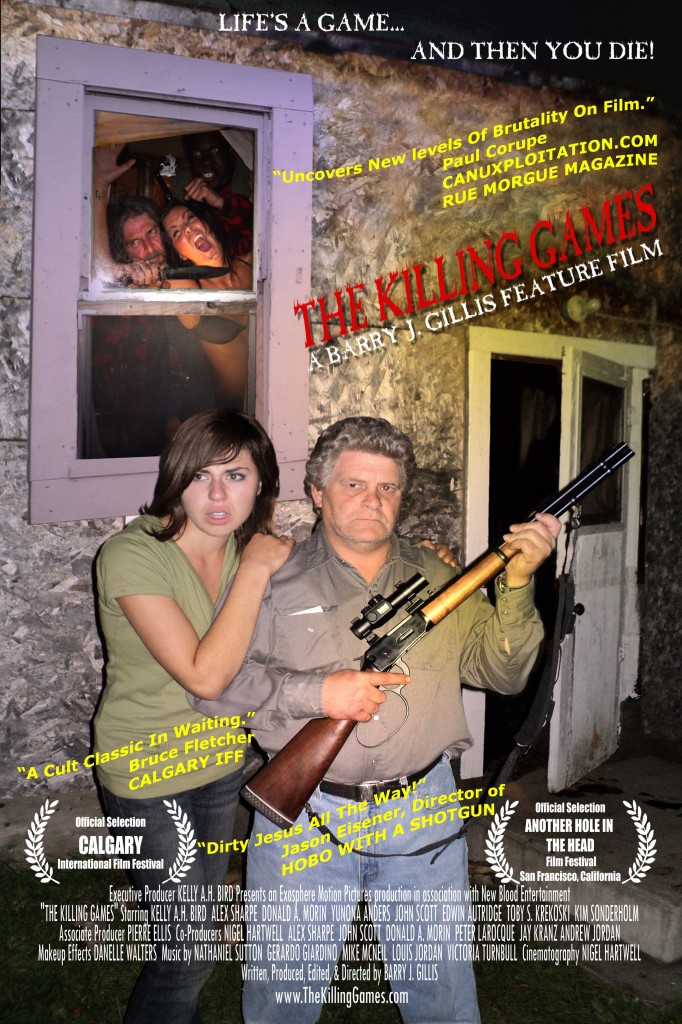 “THE KILLING GAMES” is set to screen in the United States for the first time on Saturday December 1st, 11pm, at the historic Roxie Theater in San Francisco, California. The U.S. Premiere follows a successful recent World Premiere screening at The Calgary International Film Festival. “We are excited about having the movie play in San Francisco at Another Hole In The Head Film Festival.” States Director Barry J. Gillis.

He continues “The Calgary screening was truly unbelievable. The audience was howling, cheering, roaring, and yelling out crazy things, and they were really loving the experience of THE KILLING GAMES on the big screen. Then they were clapping and cheering for more when the movie was over. I’ve never witnessed anything quite like it. Then outside the The Globe Theatre, crowds of enthusiastic new fans were waiting to meet the cast and crew as we left the movie theatre. They wanted to talk, and for us to sign autographs, and we’re not just talking about a few people. I couldn’t even move, the sidewalk was that jammed with fans. It was quite the World Premiere in Calgary. We believe that the momentum will go into overdrive in San Francisco. So we are bracing for the best. I’m personally looking forward to being in attendance at the Premiere and meeting everyone that comes out to see and support the movie.

The movie has been getting some good word of mouth, as well as a few great timely quotes. Bruce Fletcher with The Calgary International Film Festival has stated that “THE KILLING GAMES is a cult film in waiting.” Jason Eisener director of HOBO WITH A SHOTGUN starring Rutger Hauer has said, “THE KILLING GAMES “must be experienced with a group of friends… Dirty Jesus all the way!!!” Paul Corupe, a writer with Rue Morgue Magazine, and president of the highly praised Canadian exploitation feature film site Canuxploitation.com comments that “THE KILLING GAMES uncovers new levels of brutality on film.”

In May Gillis was told that his feature film “THE KILLING GAMES”, was too violent for The Edmonton International Film Festival, after two reps from the festival attended a private screening for the cast and crew at the Garneau Theatre in Edmonton. Gillis was shocked by the decision, mainly because he resides in Edmonton. “I was really shocked because both those reps had the nerve to sit through the entire movie from beginning to end, yet later proclaim the movie was too violent for others too see.” Gillis affirms. He then continues in a more upbeat mood “but that’s all in the past now. We invaded Calgary and won people’s hearts, and now its time to invade San Francisco and win more hearts. First we take Manhattan, then we take Berlin, so to speak,” Gillis laughs.

In its 9th year, Another Hole In The Head Film Festival, (a tentacle of the SF Indie Fest) has established itself as one of the top 5 genre film festivals in the world. At the helm of one of the most exciting film festivals is George Kaskanlian and Eric Ringer who promise that this year will really blow peoples minds. The opening night at Terra Gallery on Wednesday November 28th at “HoleHead”, offers the newly remastered 30-year anniversary of FORBIDDEN ZONE in Color with Richard Elfman and Marie-Pascale Elfman expected to be in attendance. A celebratory party featuring the music of OINGO BOINGO and Depeche Mode tribute band FOR THE MASSES will follow.

In addition to THE FORBIDDEN ZONE, and THE KILLING GAMES, rounding out the 11 day, 50 feature film event is Rodrigo Gudiño’s THE LAST WILL AND TESTAMENT OF ROSALIND LEIGH, Bradley Scott Sullivan’s I DIDN’T COME HERE TO DIE, and CELL COUNT starring Daniel Baldwin and Directed by Todd E. Freeman, amongst many other great entries.

THE KILLING GAMES is a disturbing, yet highly entertaining feature film about a man who’s wife is dying of a mysterious illness. The man contemplates taking the law into his own hands after his daughter (witnesses a double homicide and narrowly escapes the grasp of two serial killers. The serial killers, aptly named Dirty Jesus and Son Of Satan, are proving to be crowd favourites in the early screenings of the feature film.

THE KILLING GAMES was shot in Wabuman, Lac St. Anne, Alberta Beach and Edmonton, Alberta, Canada. It stars Donald A. Morin, leading actor of the highly acclaimed French Canadian feature film Windigo. It also stars Denmark’s Kim Sonderholm, who has been involved in over 100 movies, including his latest outing entitled LITTLE BIG BOY. Cinematography was conducted by Nigel Hartwell who was flown in from Toronto. Hartwell will also be cinematographer on CANADIAN SUMMER which Gillis plans on shooting in Calgary and surrounding areas in the near future.