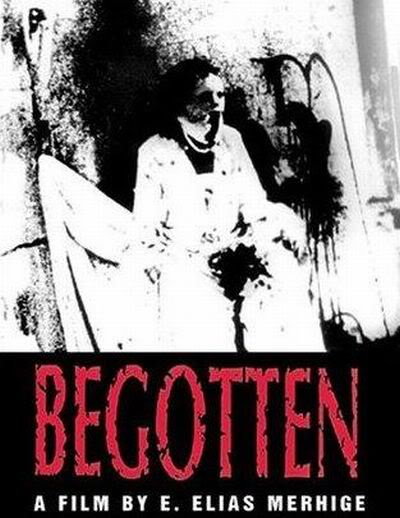 Many of you Bastards might remember director E. Elias Merhige from the mediocre-to-awful Ben Kingsley thriller SUSPECT ZERO, or his rather disappointing F. W. Murnau biopic SHADOW OF THE VAMPIRE, but before all that came a small horror film entitled BEGOTTEN.

So, what’s it about?

Well, I’ve seen this bad boy about four times, and I can safely sum up the plot as…er, I don’t know.

So, there’s this celestial being sitting in a house, disemboweling itself with a straight razor, and then this chick gives birth to a monster that may or may not symbolize either the second coming of Christ or another Aerosmith reunion, and then Yakov Smirnoff gives head to a ukulele while Gallagher smashes watermelons with a couch cushion. And all this happens in the first five minutes. Or something like that. Or not.

I’m not sure I can recommend BEGOTTEN, but I would still encourage you to check it out. Especially if you sport berets regularly and enjoy your horror artsy and unintelligible. Yeah, I’m talking to you, Mr. Fancy Pants.