Home  ⁄  The Wire  ⁄  BEYOND MOTHERBOY: THE POP MUSIC LEGACY OF “PSYCHO”

Everyone knows Bernard Herrmann’s excellent score for PSYCHO, an exceptional piece of work that’s as much a part of the Hitchcock film’s legacy as the infamous shower sequence. Herrmann, however, wasn’t the only musician who took tonal inspiration from the granddaddy of slasher flicks. In anticipation of the newest entry in the PSYCHO franchise, A&E’s upcoming television series “Bates Motel” (which presumably eschews the plot of the Bud Cort-starring pilot from 1987), I took a gander at the history of pop music that clearly takes its’ cues from the classic story of a boy and his mother.

I haven’t been able to find any confirmation that The Sonics’ garage rock classic “Psycho” was inspired by the Hitchcock film, but it sure seems as though it would be – the group formed in 1960, and the track first appeared on their 1965 album “Here Come the Sonics,” though they’d played it live for several years by that time. But seriously? Garage rock song about a guy who’s nuts because a girl rejects him? Also, it’s just a great song. As there’s no music video, here’s a nice fan production using clips from the Georges Melies short LE CAUCHEMAR.

New wave band The Hitmen (not to be confused with the Australian hard rock band of the same name) recorded “Bates Motel,” their tribute to the film for their 1981 album “Torn Together,” released two years before the franchise was revived with PSYCHO II. The music video is packed with Hitchcock references not limited to PSYCHO, and casts lead singer Ben Watkins in the Norman Bates role.

The same year, early synthpop band Landscape released another PSYCHO-inspired song, the catchy-if-repetitious “My Name is Norman Bates,” releasing a video that uses clips from the movie with the band occasionally popping up ominously and singing the title.

The franchise itself produced a rare music video in 1986 with the release of PSYCHO III, attempting to market Carter Burwell and Steve Bray’s solidly jazzy score to MTV’s audience. The resulting video is pretty standard, but it uses mostly new footage, mixing black and white and color sequences. Is this supposed to be in continuity? Enjoy the video, with an intro by Anthony Perkins promoting the flick.

Things were quiet for a while (sadly, there were no music videos for PSYCHO IV, the failed BATES MOTEL pilot or Gus Van Sant’s weird film student project), but last October featured two new videos with that motel-of-doom kind of feeling. The Burning of Rome’s song and video for “Norman Bates” provides an all-new take on the relationship between Norman and Marion Crane, ending in a surprise shower scene.

And we’ve mentioned David Kittridge’s video for Shyboy’s “Marion Crane” on this site before, a great piecing together of footage from the original film backed by a seductively sinister song.

Will A&E’s new “Bates Motel” TV series inspire a new trend of music inspired by Martin Balsam or the Car That Wouldn’t Sink? Probably not! But the franchise already has a long history of inspiring other media, so a new incarnation, presumably, wouldn’t harm a fly. 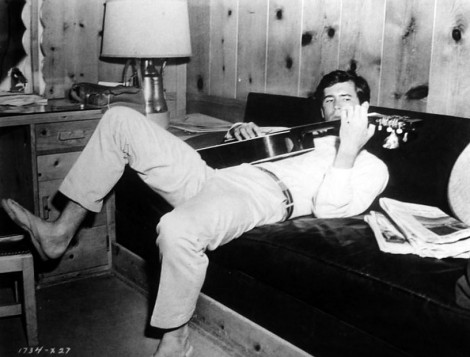