For our semi-regular team-up feature, we considered asking each of our writers to name their favorite Kaiju monster. But there’s really only one conceivable answer to that question. 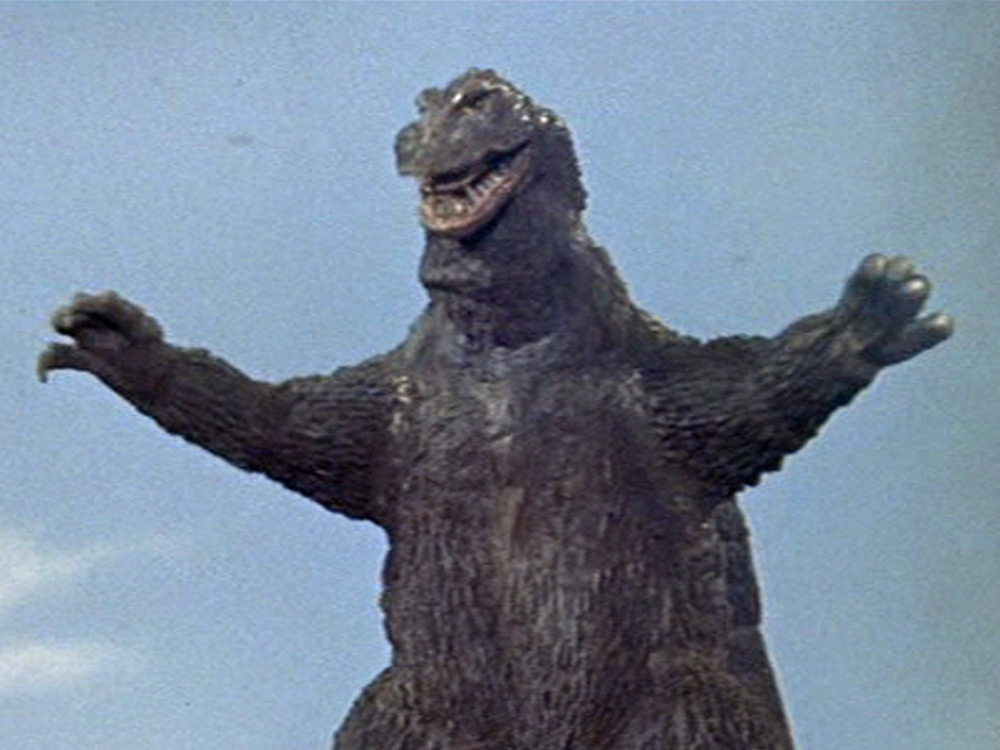 Godzilla is the king of monsters. There’s a fairly steep drop-off after Godzilla. So here’s the question:

Who is your favorite second-tier Kaiju? 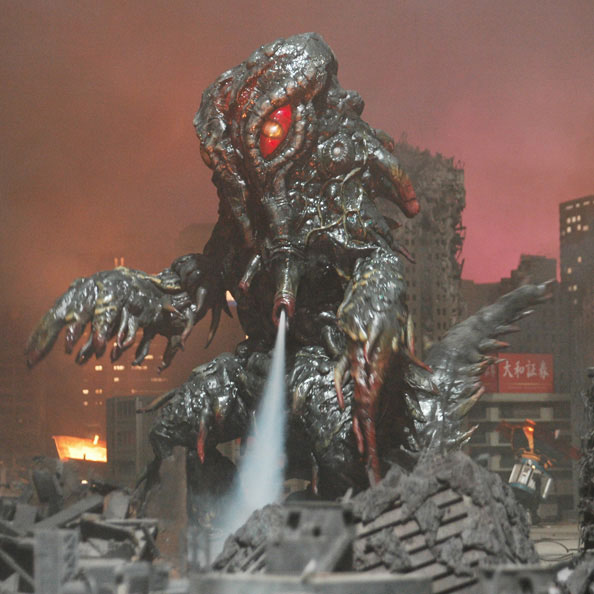 IVAN INFANTE: Hedorah, because that was the first film I saw, and I loved the way he grew up from a tadpole in Suruga Bay. 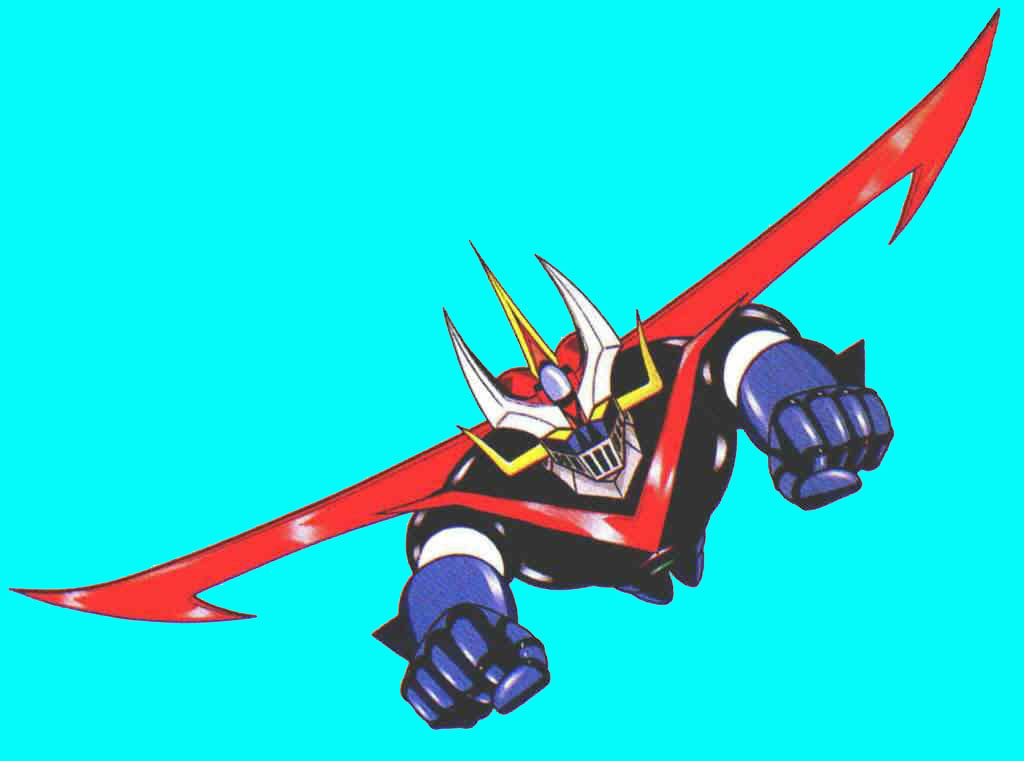 RICH MAIER: If mechs count, then I’d have to say Mazinga. 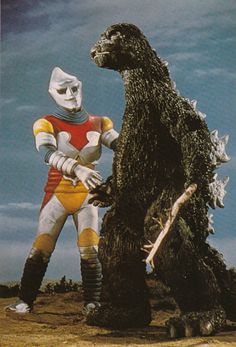 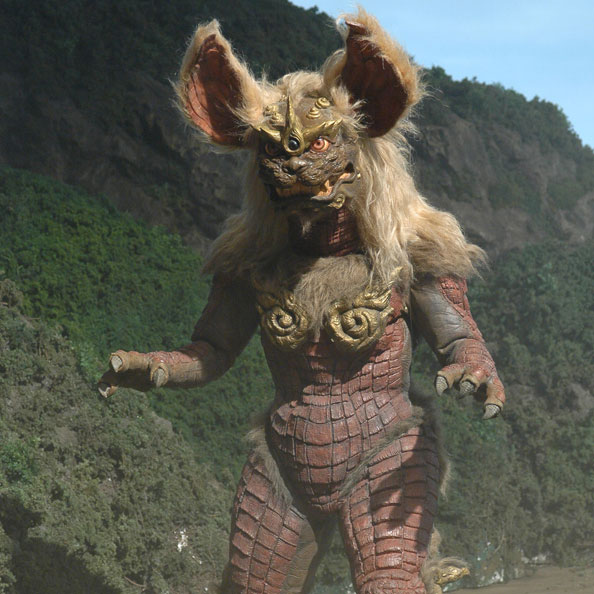 ANYA NOVAK: King Caesar, in all of his fluffy floppiness. He was the most adorable kaiju ever, he scored an assist on MechaGodzilla’s beatdown (with Godzilla doing most of the dirty work), and he deserved more than two movie appearances. Homeboy just wasn’t intimidating enough for the masses, but I will always adore him. 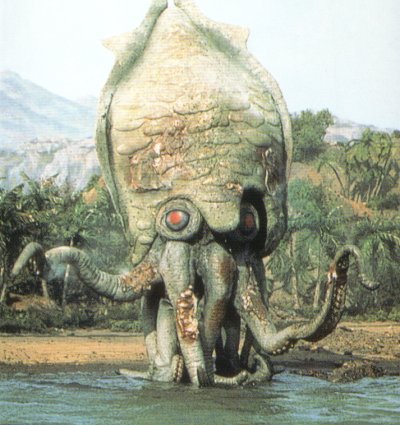 ANDY VANDERBILT: I always like Gezora, who while not a Godzilla monster, appeared in the NES game, among other Godzilla-related merchandise, along with stock footage of him being used in GODZILLA: FINAL WARS, despite his film debut being SPACE AMOEBA. I think since I have a fondness for all things aquatic, and he was much more memorable than Ebirah, the giant crustacean from the ill-received and eventual MST3K-fodder GODZILLA VS THE SEA MONSTER. Second choice would have to be Megalon, mostly because despite the dislike for that movie, I love it for the ridiculousness of Jet Jaguar and Megalon, and the awesome tag-team insanity of the fight. 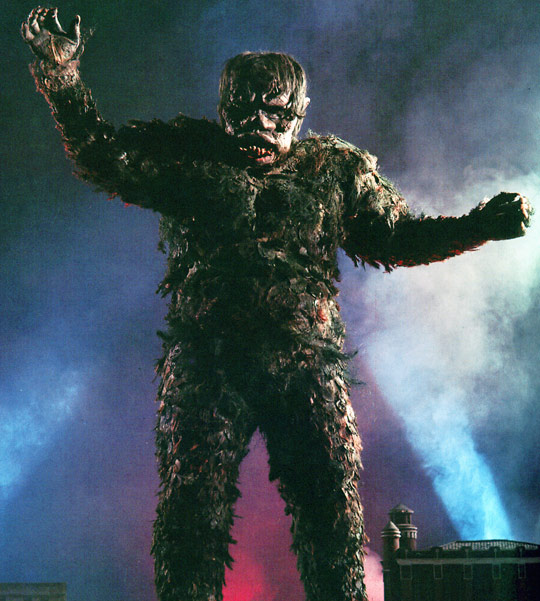 MAC BELL: Gaira from WAR OF THE GARGANTUAS. Shaggy, green and really mean, he’s possibly the foulest of all Kaiju. And he eats people. While his battle with gentler brother, Sanda, is well staged, I would much rather have seen a Godzilla vs. Gaira bout. I imagine it being one of the most down and dirty punch-ups of The Big G’s career. 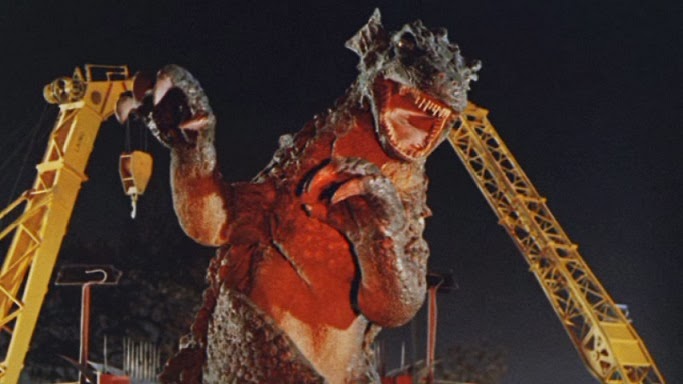 RYAN CAREY: Gorgo, dammit! He may be British and he may be even lower than second-tier and he may not tecnically be “kaiju” at all, but his one and only cinematic starring turn was an astonishingly ‘ off-target attempt at Anglicizing a phenomenon that wadn’t designed to make such a cultural leap. The Brits suffered more than their fair share of devastation during WWII, but they weren’t nuked, and watching them try to appropriate Godzilla minus any sort of post-atomic angst is understadably — and perhaps unforgivably — hollow, but also bizarrely fascinating. 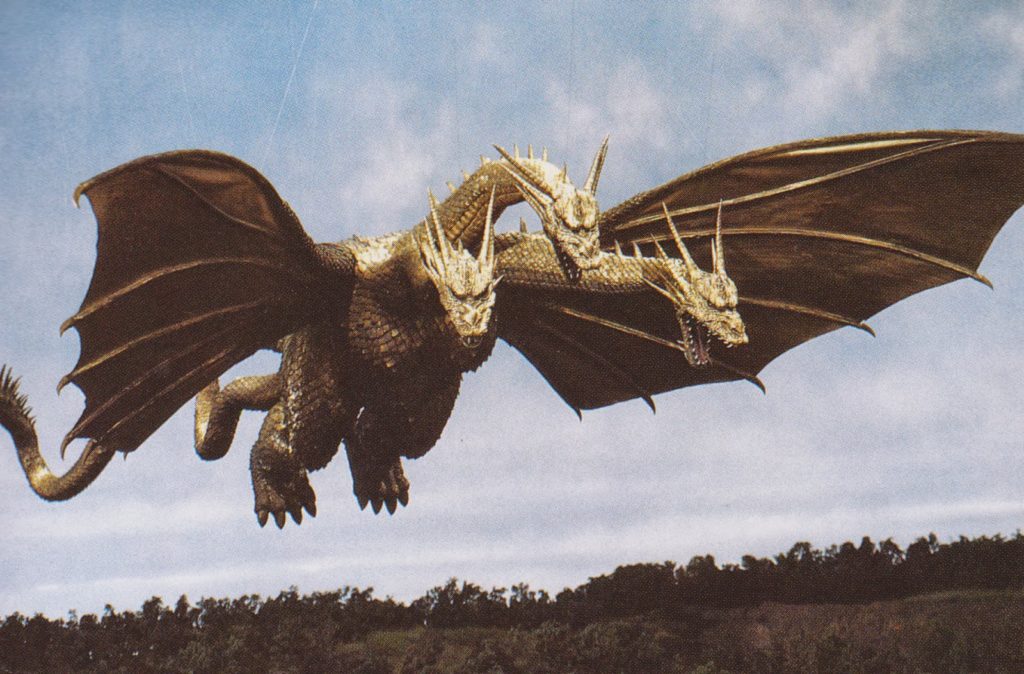 PATRICK SMITH: Even more than Big G, my favorite has always been King Ghidorah. Thinking back, I can’t remember the first time I saw him, but the idea of a giant three-headed dragon that blocked out the sun as it flew past definitely scared the shit out of me as a kid. As I’ve gotten older, I’ve really come to appreciate the weirdness of the design, and the fact that its three heads acted independently, giving KG a crazily-erratic fighting style. Couple that with the crazy nightmare machine that is Mecha King Ghidorah (scientists created a mechanical head to just chill with two normal heads? Do you think they ever said, “Man, I don’t know about this guy”?) and I’m always in this guy;s corner.

Bonus points: When MF DOOM takes your name as an alias, you know you’re cool. 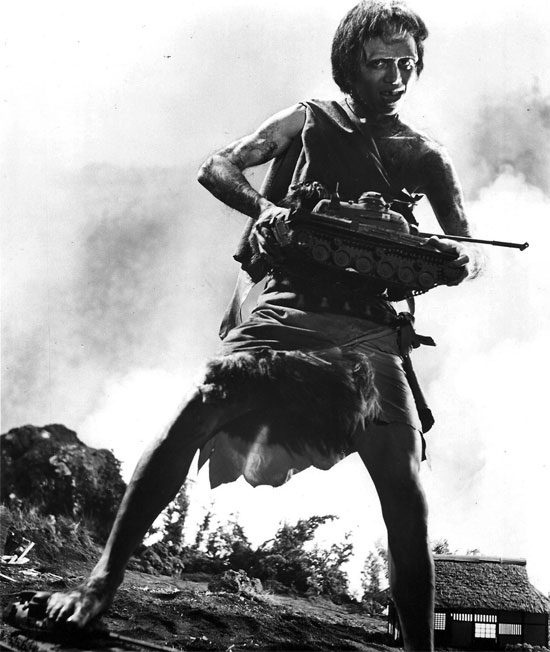 BRETT GALLMAN:  When I first heard this question, one name immediately sprung to mind: Frankenstein, if only because this is one of the more inexplicable Toho productions.  Sure, once the studio inherited the throne of cinematic monster tamers, it did make sense that they would welcome Mary Shelley’s legendary creature into its stable — he’s sort of the godfather of modern day monsters, after all.

However, it’s the manner in which they decided to do so that’s certifiably bonkers.  When faced with the uphill battle of somehow transporting the centuries-old Monster into the Kaiju arena, the studio spun a hell of a yarn: “What if he were immortal because his heart just wouldn’t stop beating?  Also, what if that heart somehow ended up in Hiroshima when the A-bomb dropped?”

That’s certainly one way of going about killing two birds with one stone — not only does this explain how Frankenstein’s monster (completely re-animated from the nuked heart — JASON GOES TO HELL, eat your, uh, heart out, I guess) is let loose on Japan, but it also explains why he grows into a giant, rampaging beast that terrorizes the countryside (despite the title, there’s not much world-conquering to be found here, especially since the Monster kind of saves it).  Toho (and US cohorts UPA) don’t stop there, though: this production is quite generous with that sense of reckless abandon that the kaiju genre often thrives upon.

Comparing it to a kid mashing up toys in a sandbox is cliché as hell, but how else do you describe a movie with a script propelled by half a dozen “and then…” moments? A giant Frankenstein’s monster (whose flat forehead and childlike manner totally recalls Karloff’s take, by the way) wreaking havoc sounds awesome… and then another, completely unrelated Kaiju named Baragon emerges to do exactly the same thing.  It is apropos of nothing other than the script finding an excuse to have its title monster wrestle with something during the climax.

And then they do, and it rules; and then, depending on which version you watch, a giant octopus might appear out of nowhere to conclude the film.  And then, this madness continued to propagate with an even more inexplicable sequel: WAR OF THE GARGANTUAS, featuring not one, but two Frankensteins, in case you’re wondering if Toho felt the need to rein in this terrific nonsense. 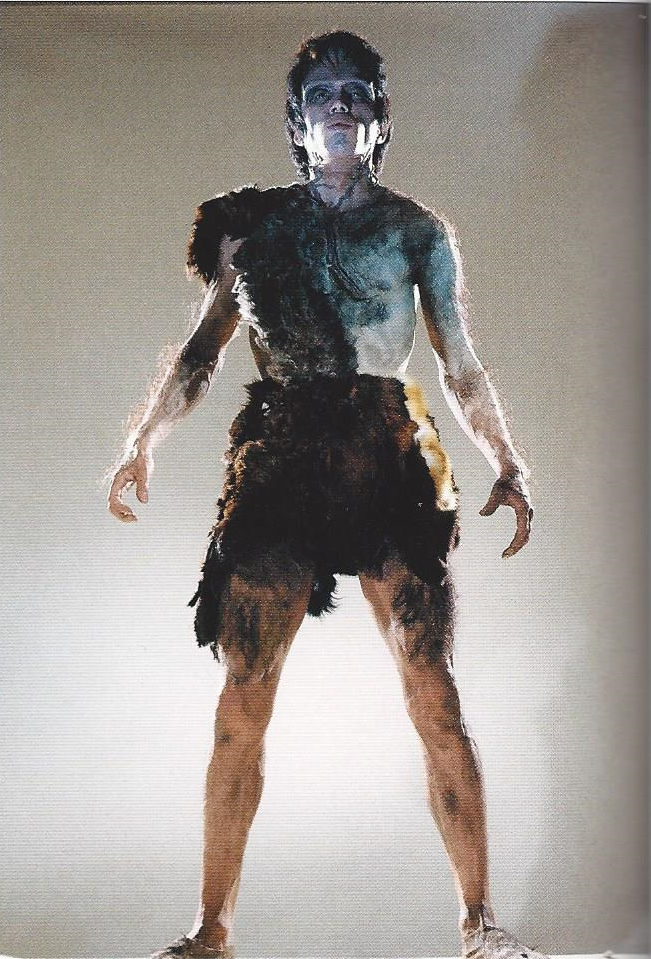