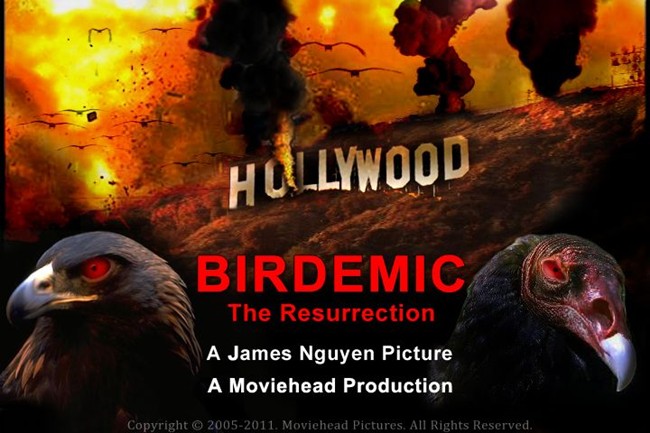 Eight words: Holy fucking shit I must see this immediately!
If you’ve seen BIRDEMIC then you know that flick kicks an unholy amount of ass. You just can’t beat a platoon of eagles and vultures bringing hell to a small town full of victims. Considering the cult status that flick received, it’s no surprise that a sequel is in the works.

“As rumored earlier we can now confirm that both Alan Bagh and Whitney Moore have officially signed on to reprise their characters along with many other familiar characters from Half Boon Bay that are set to return. While showing off his mastery of the romantic thriller director James Nguyen will be introducing two new characters as well, and while we can’t drop the plot bombshell we learned of on you guys just yet, we can tell you that Nguyen has raised the stakes this time and you, my fellow sickos, are in for one hell of a crazed and very romantic experience. Filming officially kicks off on February 4th.”

We’ll update you with more the second it passes our ears and/or eyeballs.