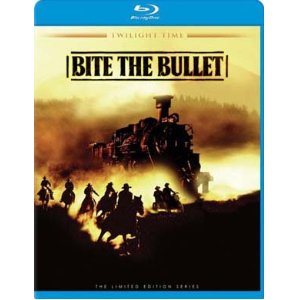 It’s always been a fascination of mine in which films are granted the pleasure of a Blu Ray release and which films are trapped in the realm of standard definition or—gasp! VHS only. Obviously big budget crowd pleasers like STAR WARS and JAWS will always make it onto the latest format and cult classics like THE EXTERMINATOR and THOUGH SHALL NOT KILL EXCEPT will find the proper champions to propel them into this latest realm of high definition. But, BITE THE BULLET? That was a film I never expected to see on dvd let alone blu ray. Now thanks to Twilight Time, we can witness this under seen and definitely underrated Western gem in glorious, bright & shiny 1080p! 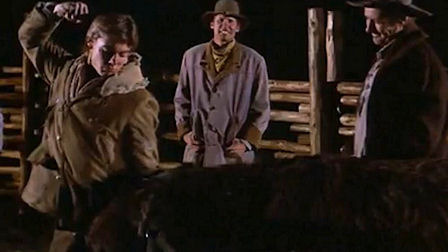 Directed and written by Richard Brooks and filmed 9 years after he assembled the dream team of Burt Lancaster, Lee Marvin, Woody Strode, Robert Ryan, and Jack Palance for the undeniable masterpiece THE PROFESSIONALS, BITE THE BULLET never quite captured the imagination of its era. Centering around a couple of ex Rough Riders squabbling it out as they compete in the Western Press horse race of 1906; Brooks really tried to cram it all in to this overstretched narrative, and audiences probably couldn’t figure out this literally cow-punching comedy after suffering a scene or two of attempted rape. The only way you’re going to hack any enjoyment from this flick is to just accept that your emotions will be tugged back and forth by its tone and when you’re not chuckling at kooky barroom brawls you’re cheering for James Corburn to push Jan Michael Vincent’s face into the mud.

As a way of strutting his feathers to the nation, moneybags Dabney Coleman has Citizen Kaned his yellow journalism empire to promote a cross-territory horse race. He’s hired war hero Gene Hackman to tend to his prized horses and get them to the station on time for this Western CANNONBALL RUN. But Hackman exhibits PETA-like moralizing and cannot push a horse let alone whip it towards the destination. And if he should stumble upon an abandoned glue factory wagon in the desert with a freshly birthed foal, he’s definitely going to be late to the party. Toss in Candice Bergen’s feminist prostitute, James Corburn’s Rough Rider gambler, Ben Johnson’s proud old timer, Ian Bannen’s fox hunting Englishman, and Jan Michael Vincent’s whipper snapper gunslinger and you’ve got yourself a comically crafted cast of characters only fit for the cinema. 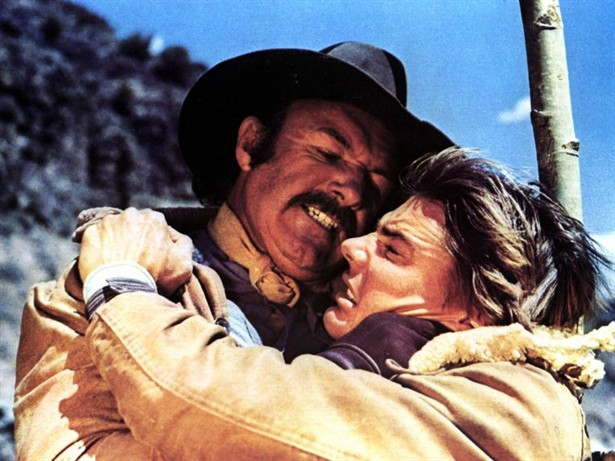 Gene Hackman and Candice Bergen got their faces on the poster but don’t expect a romance for this rather violent duo; mutual respect for each other is as close as you’re going to get to a love scene. Which shouldn’t be too surprising for those out there who’ve had the pleasure of witnessing the passionate blood splattering hate that they displayed in THE HUNTING PARTY, a terrifyingly (but wonderfully) amoral Western shot four years previous. But Bergen is easily the weakest character in BITE THE BULLET, and her third reel shenanigans are a serious indication that Richard Brooks was not sure how to properly wrap the climax. She starts the film all pride, but when her motivations wander southwards towards the libido, she unleashes a few groans of “COME ON!”

And Jan Michael Vincent! What’s with that guy’s face? I always want to punch it. I suppose that’s the desired effect from his cocky gunslinger, who starts the film brimming with arrogant bravado ready to be dashed by the genuine man of the west Gene Hackman, but dang he’s just too good a being an A-bag. You gotta give Brooks credit that he doesn’t just simply leave Vincent’s jerkwad on the fringes; the kid eventually recognizes the badassery of Hackman & Coburn and joins their cause to keep the race clean and chain gang free. Turns out that he’s just a good kid looking for a father figure. I still want to pop him one. 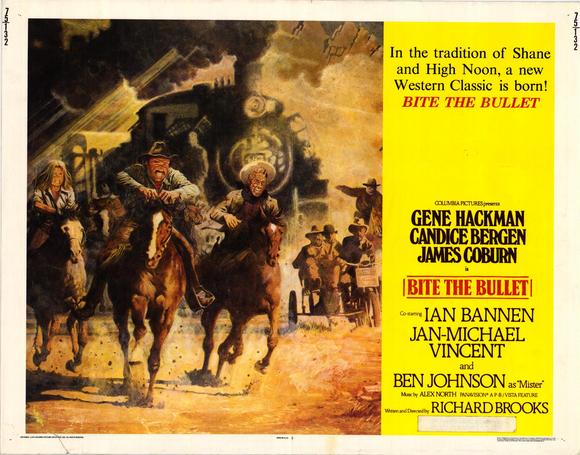 Where the film works best is in the Rough Riders, Hackman & Coburn. No real shock there. We live in a modern world where the manliest of men pluck their eyebrows and when confronted with two of the grizzliest good-natured cowboys it’s easy to root for them when they’re spitting chaw and vitriol. Gene Hackman is the simple White Hat of the pair, determined to win the race as a testament of honor. James Coburn is the scallywag with the dusty Gray Hat if not the full on black Stetson. He’s in it for the money and he’ll split the winnings if he gets the higher percentage of the share—and whatever you do you can’t let the kid win. There’s an intoxicating allure to their bickering and the audience is never bored when the film keeps them at the center.

Bite the Bullet will never go down alongside Richard Brooks’ typical classics like THE PROFESSIONALS, IN COLD BLOOD, or CAT ON A HOT TIN ROOF, but it does deserves more attention than the video dungeon, and Twilight Time’s crisp new Blu-ray is a surprising treat. It’s definitely a film to pull outta your hat when some newb starts babbling on about the genius of the great horse race picture, Hidalgo…uh, that happens to you guys, right?