Home  ⁄  The Wire  ⁄  ‘BLACK MIRROR: BANDERSNATCH’ ISN’T A MOVIE OR A GAME: IT’S A MENTAL-ILLNESS SIMULATOR

The first decision that Choose-Your-Own-Adventure ‘movie’ Black Mirror: Bandersnatch asks the audience to make is between two cereals. It’s an everyday decision, but because they’re watching Black Mirror, the audience is anxiously trying to determine which cereal will ruin Stefan’s life. The same when choosing Stefan’s music; these decisions surely have unforeseeable consequences, some of which may involve government-controlled robot bees. And what’s the hidden message in the graffiti on that billboard?

This is completely rational behavior. The audience knows Charlie Brooker planted stuff all through this thing. All they need is a pen and a weekend watching the same footage over and over like it’s the Zapruder film.

The phrase “down the rabbit hole” is a nod to Alice in Wonderland. Follow the White Rabbit and it’ll take you to a world of fantastic new concepts and ideas. A White Rabbit can be anything. It can be your idol, and the career path you want. It can be the compulsive revisitation of a painful memory in the search for answers about yourself. It can be the impulse to bite your nails until satisfied. It can be a stray thought.

Example: It occurred to me all the Conners except Roseanne might be dead, and we’re watching them in purgatory. Canonically, it’s the only thing that makes sense. Dan was already dead, and then there must have been a house fire, and everyone was killed except Roseanne, because she was out scoring opioids. Jackie was over, of course, and sometimes she brings her mom, so that’s not a stretch. Geena was home from overseas… In fact it was Christmas or Thanksgiving or something, because a lot of people must have been gathered in that house when it went up rather quickly. It must have been an explosion, gas or septic. Do the Conners have a septic tank? Now I have to pull up Hulu and binge the whole thing again to find out. Maybe someone on Reddit knows…

I followed this rabbit hole where it went, and now that’s my head-canon and I’ll need Sara Gilbert to tell me otherwise to my literal face in order to believe it. That’s not Sara Gilbert’s responsibility, so I have a binary choice; I can follow the White Rabbit into John Goodman’s trash cans in search of the truth, or I can let it go and live with the uncertainty of never knowing for sure. I can continue to go down that rabbit hole, or I can choose to let it go. And if I want to let it go but can’t, I should talk to someone — anyone — about these impulses, because I’m not in control of myself, and I need help. 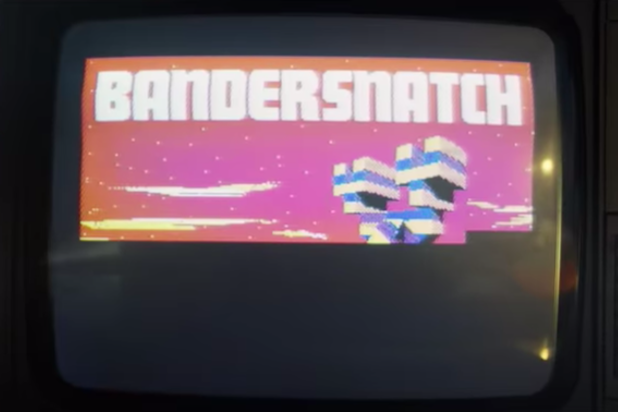 If you’ve spent time-and-a-half trying to suss out the hidden meanings and messages in Bandersnatch, imagine what it’s like to put that kind of thought into decisions every moment of every day. Imagine you’re 100% certain you’re living in a Black Mirror episode, but you don’t know which one. Every morning you wake up and question what’s in the red-and-yellow pills and if you should stop taking them. You wonder what your Dad is hiding in his locked office. You parse graffiti for hidden messages. You’re suddenly compelled to bite your nails and wonder if you’re being controlled by a viewer. No matter how exhausting or detrimental to your life it may be, you can never stop questioning everything around you because if you do, something awful might happen.

Bandersnatch forces the unknowing audience to experience this kind of anxiety, obsession and paranoia in the most insidious and effective simulation of mental illness ever designed. Like Stefan’s own theories and suspicions, every explanation posited for Bandersnatch contains loose ends, but they’re backed up by enough circumstantial evidence to feel plausible, if not a little shaky. Mental illness uses truth to prop up its lies.

Here’s the only Bandersnatch flowchart you need: Every decision is between the subjectively-positioned “right one,” and a rabbit hole. I could choose to elaborate, but after I found myself Googling American singer-songwriter Eddie Rabbitt in search of a connection to the Thompson Twins, I made the only real choice Bandersnatch truly gives its audience: I stopped chasing all the damn rabbits. The ability to recognize the hole I was going down, and to make the choice to stop is how I know I’m having a “good day.” On a “bad day,” I might not have seen the bloody writing on the wall.

Even this, a meta-analysis beyond the scope of Bandersnatch’s actual plot, is another rabbit hole that winds all the way through Dead Conner country. You can choose to follow it or not, and that’s a wonderful luxury to have.