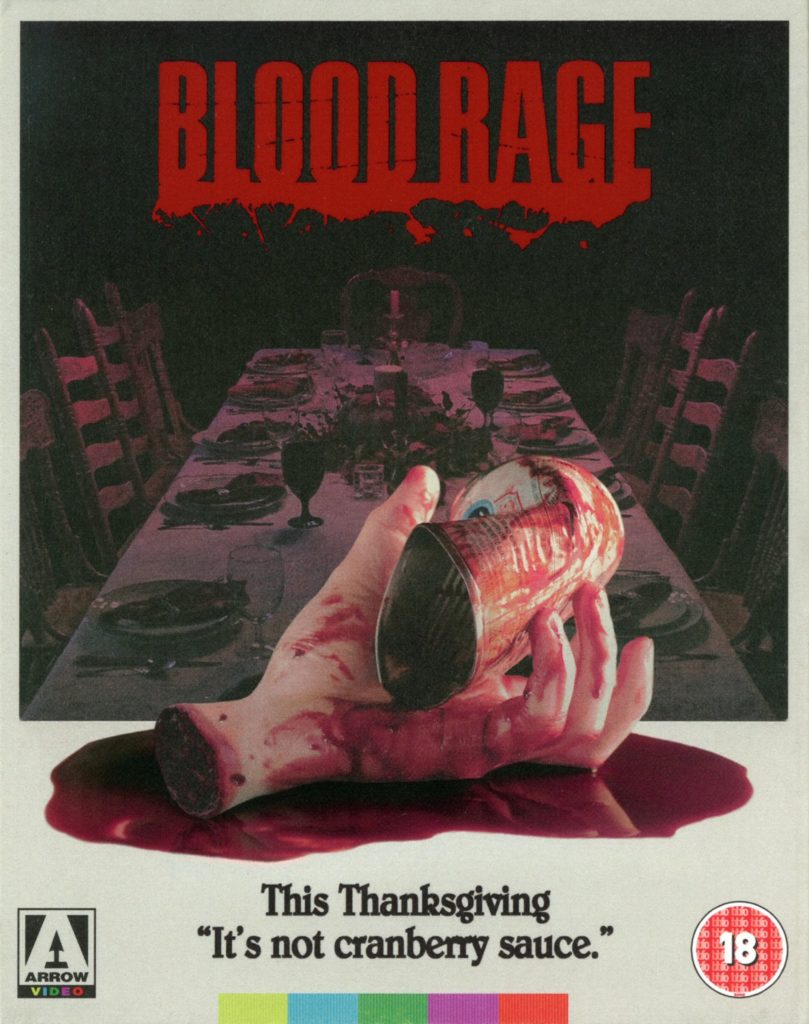 Don’t listen to that blowhard Eli Roth. Despite his self-aggrandizing fake trailer for Thanksgiving sandwiched in between the two mini features that comprised GRINDHOUSE, which he purported to be the first to exploit the previously unexploited turkey day, BLOOD RAGE (aka NIGHTMARE AT SHADOW WOODS) had beaten him to the punch by roughly twenty-five years. And what a twenty-five years it’s been. Long considered an obscure title, available only in compromised hack jobs found on VHS and DVD releases, the true, intended, and uncut version was finally unleashed last year by Arrow Video in all its “that’s not cranberry sauce!” glory. And it is a sight to behold. 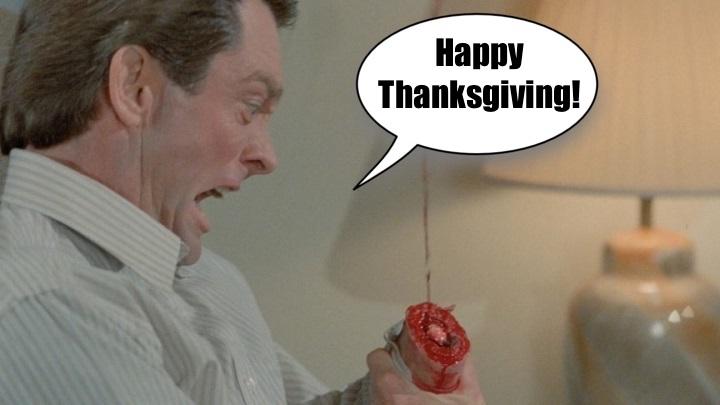 BLOOD RAGE offers everything the hardcore slasher fan could possibly want: a gimmicky but forgivable premise, a charismatic but quirky killer, tremendous violence, a nice helping of T&A, an array of flying limbs, and not a single unwelcome minute of stagnation. BLOOD RAGE moves at a clip, only hanging around long enough to commit bodily mayhem against its cast before zipping to its “seriously, what is this?” ending, cutting to black, and rolling credits.

In the subgenre of the slasher film, it’s easy to love many titles strictly via irony. PIECES, for example, is an absolute favorite, as well as THE MUTILATOR, but I could never in good conscious call either of them actual good films. But BLOOD RAGE is different. So different. On the BLOOD RAGE scale, I give it five out of five cut-off hands holding a beer can. Because, you see, one film is not less good simply because it’s striving toward a different goal. JAWS is not less of a good film because THE GODFATHER exists. MAD MAX does not pale in the majestic shadow of MAD MAX: FURY ROAD. BLOOD RAGE is as good at killing teenagers as Quint is at captivating a crew with his wartime stories, or Sonny Corleone is at personifying agonizing death, or the Doof Warrior is at rocking out on a flaming fucking guitar. In fact, BLOOD RAGE is better at what it wants to do because it exists in an entirely uncategorizeable box – an entity unto itself, and only itself. And I love being able to say that. 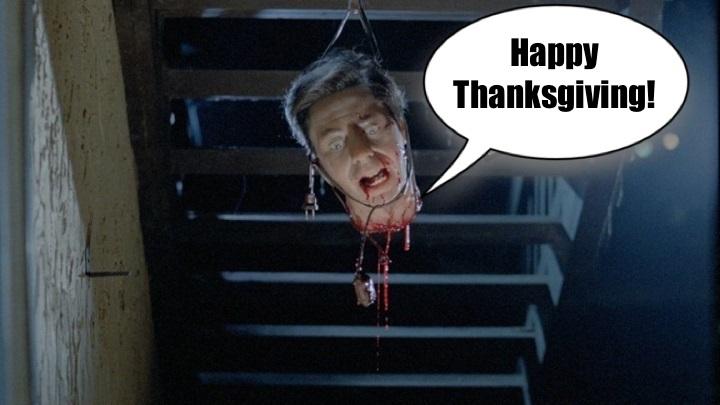 Its plot, such as it is (or ain’t), is so sinfully simple and rife with logic errors that it transcends ineptness and becomes charming. A family receives word that their so-called psychotic family member has escaped an asylum and could be heading their way, but…no one cancels Thanksgiving dinner. No one cares. No one looks alarmed. Not a single person says, “Gosh, maybe we should drive our functioning cars to safety.” In the land of BLOOD RAGE, it’s don’t worry, be happy. There are no cars that don’t start, there are no phone lines that are cut. People just…willfully choose to stay in the place where the murderer seems to be heading, without concern. And it’s glorious, because someone’s HEAD gets hacked in half and you can see his entire BRAIN. That’s BLOOD RAGE, people. That’s what you’re getting, and like a slice of pumpkin pie after a big turkey dinner, it’s delightful. 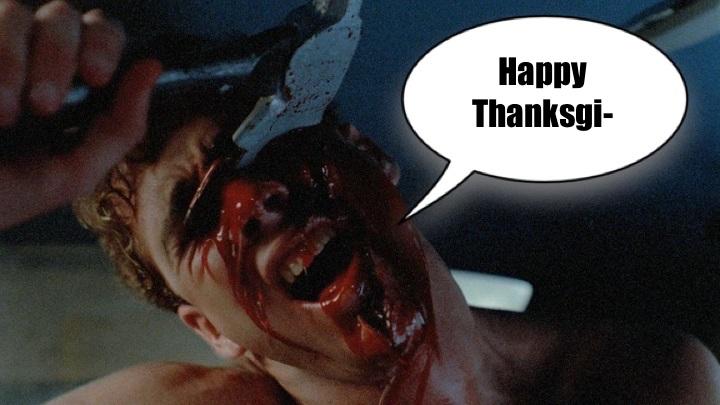 What BLOOD RAGE gets right, effortlessly, is its willingness to be fun. The premise alone lets the audience off the hook in the sense that they’re not left wondering for the entire film just who it is behind the mask that’s cutting of everyone’s knees and faces, inevitably leading to an underwhelming conclusion bound to satisfy only a fraction of the audience. At no point is BLOOD RAGE‘s audience left to theorize about the mysterious identity of the killer responsible for all the carnage.

It’s Terry. The one in the striped shirt. He’s…right there. 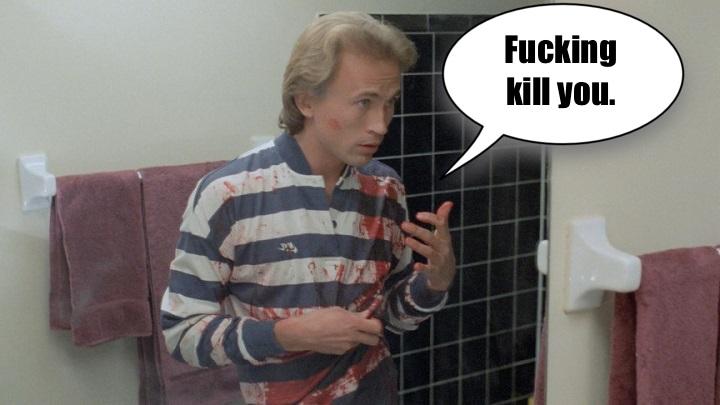 The acting’s about the caliber you might expect from a low-budget slasher film made in the early ’80s but not released until the late ’80s. It’s doable, passable, and certainly entertaining enough. Plus Ted Raimi appears as “Condom Salesman.” He has one line: “Condoms?” (I think. Memory’s hazy on this one; I think BLOOD RAGE broke my brain.)

Maintaining the slasher film tradition of featuring one lead actor who makes you say, “Wow, he/she’s in this?”, BLOOD RAGE features the unexpected appearance of Louise Lasser, who began her career in many of Woody Allen’s earlier films, and who most notably appeared in REQUIEM FOR A DREAM as Ada, friend to Sara Goldfarb, who eventually breaks my heart as she sobs uncontrollably on a city bench. Her role hovers somewhere between normal and Mrs. Bates, suggesting that she’s mostly grounded, but also a bit too…attached to her sons. But she plays it well, and her crazy role is just one of many crazy things that make BLOOD RAGE so crazy good. The scene in which she sits Indian style on the kitchen floor in front of her open refrigerator and begins eating Thanksgiving leftovers with a depressed look on her face because her crazy son has escaped a lunatic asylum and may be on his way to kill her and everyone else – so what else can she do? – is the stuff of cinemafantastique. 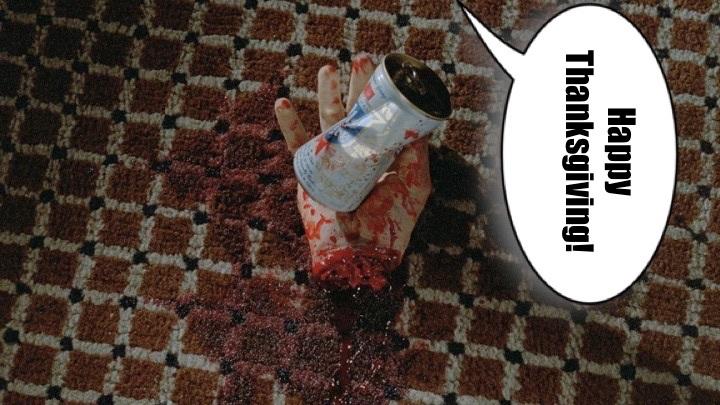 BLOOD RAGE is the movie that unaware slasher fans never knew they needed. Everything about it is pure and lovable – even the detestable violence and gore that our mothers would absolutely despise contains an intangible charm that’s become ingrained with this oft forgotten era of horror. For a film about a psychotic teen cutting down his friends and family with a machete in violent ways, it’s the most harmless slice of escapism yet that hails from the golden era of hack’em-up cinema. Its intentions are as innocent as the on-screen killer is murderous, but they both want the same thing: to cover everything in blood, and to make every minute of it as enjoyable as possible. And both succeed, so hard.

If you consider yourself a fan of old-school slashers, have never seen this, and are still on the fence, then give me a break – YOU NEED THIS. Cut from the same mold as MY BLOODY VALENTINE, THE PROWLER, INTRUDERS, and the entire FRIDAY THE 13th franchise, BLOOD RAGE demands to be part of your yearly Thanksgivings or else you’re just a big turkey ha ha. 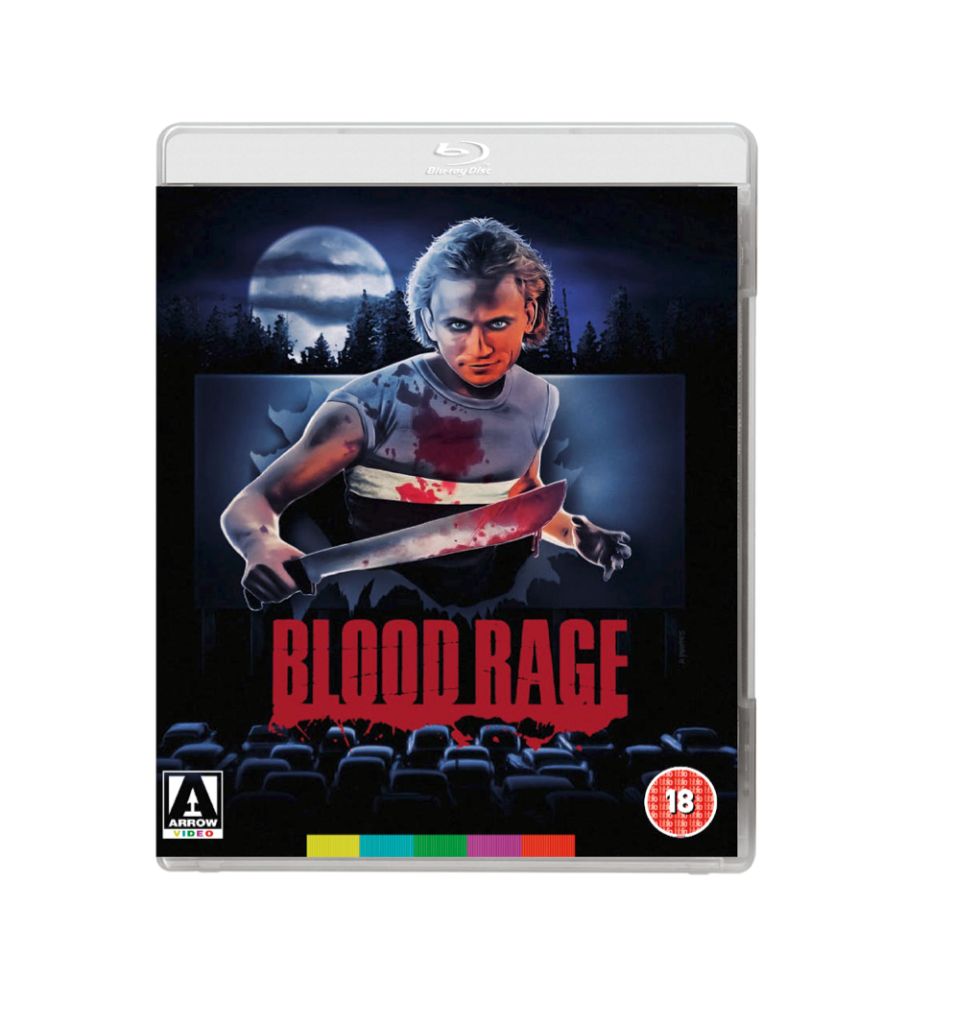