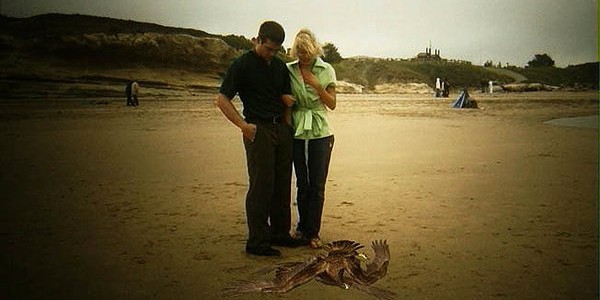 People sometimes give me a hard time about not giving certain movies a hard time.  As far as I can be classified as a critic, I have to be considered a much more forgiving critic than you’re likely to find anywhere else.  I am eminently disposed to overlook a movie’s flaws in order to focus on the parts I like about it.  The most prominent recent example of this tendency can be found in my enthusiastic review of the much-maligned TRON: LEGACY, which I still like despite admitting to its many flaws.  You’ll also see it happen whenever I get around to writing about SUCKER PUNCH, where I’ll inevitably focus my attention inordinately on Jamie Chung and the dragon, which only represent relatively small parts of a profoundly flawed whole.  I’m like a prospector, who’d rather take the time to sift through the mud for gold, rather than bitching and moaning about how muddy the stream is.

One reason for that outlook is that I can never forget the fact that movies are made by human beings, most of whom work day and night to get movies filmed and finished, and few of whom ever intentionally set out to make a bad movie.  I don’t have a lot of respect for critics who never spent a minute on a film set, but who feel empowered to sit at their desks and snipe at other people’s hard work.  Personally, I really do try mightily hard to not put anything on the internet that I couldn’t say to someone’s face.

Another reason is that I don’t like feeling like I wasted my time.  After two hours in the dark, I like to find some positive value in the experience.  Time in the dark is time away from my friends and my family, from my writing and my drawing, from running around in the sunlight.  I don’t live my life looking for reasons to complain.  I like to find reasons to be happy and hopeful, and to find constructive reasons to address and attack the negative forces in the world.  If you read my Facebook and my Twitter and my internet writing and you somehow come away with the conclusion that I am overly sarcastic and cynical, then it might help you to know that I generally have a smile on my face while I’m typing.  You can call me an anarchist and a troublemaker, but you can’t rightly call me a crank or a jerk.

My standards of badness, by necessity, are much more multi-faceted than, say, a simple A-through-F, based-on-a-letter-grade system can contain.  SUCKER PUNCH is not the same kind of bad movie as TROLL 2.  It’s not even the same kind of bad movie as TRANSFORMERS.  Just as it takes a monumental alchemy of diverse efforts to make a good movie, it takes all kinds of factors to determine where a movie went wrong.

Is the filmmaker truly moved to create this story, or is he just out to make a ton of money?  (This is impossible to judge for sure, of course, but sometimes you can tell.  Is Zack Snyder the same kind of personality as Michael Bay?  No, obviously, since Snyder created the story of SUCKER PUNCH.  This was a story he was moved to tell, unlike Bay, who made a movie about space robots from a cartoon because it was a box-office guarantee.  With SUCKER PUNCH, Snyder took a swing for the moon; he just missed.)

Does a filmmaker have any sense of craft, or is the movie lacking in any technical proficiency?  (Again, look at Zack Snyder and Michael Bay.  Both of these directors are technical wizards, but their most recent movies miss the mark for other reasons.  Namely, screenwriting.)  Is the movie well-constructed in every way, but one major error – say, miscasting the lead actor – spoils the entire thing?  Does the movie have less tangible failures, such as a miscalculated sense of tone or atmosphere?  Is human history a factor?  Is a movie just the wrong story at the wrong time?  (Look at GREEN ZONE – a good movie that got a bad rap because no one at the time wanted to think about real life at the movies.)

My point is, it’s probably not useful to call a movie “bad” and dismiss it entirely.  There are too many adjectives and modifiers in the English language available to let a movie off that easy.  Was it inept?  Was it disingenuous?  Was it brilliantly framed and edited, but misogynist or stupid?  Did it nobly spotlight social injustice, but use a generic or corny screenplay?  Was it too eerie to be a comedy?  Was it too funny to be a horror movie?  There are many different kinds of “bad.”  Be more specific. 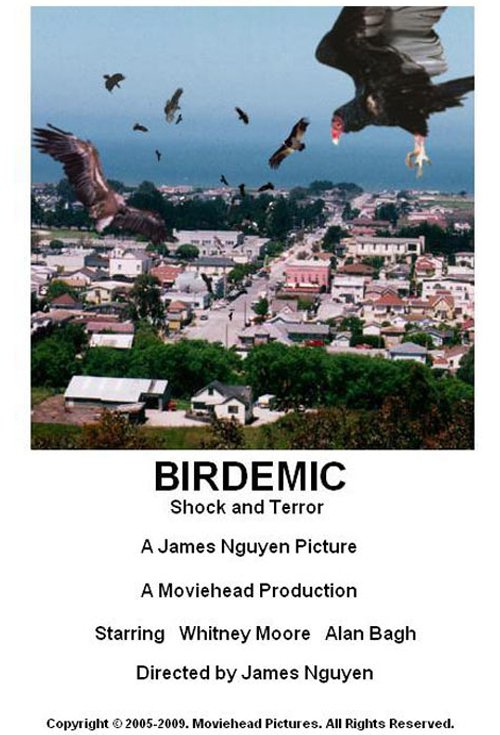 With all of that said, BIRDEMIC is truly astonishingly bad.  BIRDEMIC is bad the way that NORTH BY NORTHWEST is good.  It’s abominably written, moronically paced, unreleasably recorded, horrendously acted, and dementedly directed.  BIRDEMIC does not just misjudge everything that is accepted to be basic knowledge of cinematic craft; it misjudges everything recognizable about human behavior.  If alien film students travelled to Earth from five galaxies over, and all they had to inspire them about humanity were an Abercrombie & Fitch catalog and a copy of Conservationist magazine (that they couldn’t understand), BIRDEMIC is the movie they would make.  Oh, and it’s not a loving portrayal either.  In this hypothetical situation, the aliens really hate human beings. 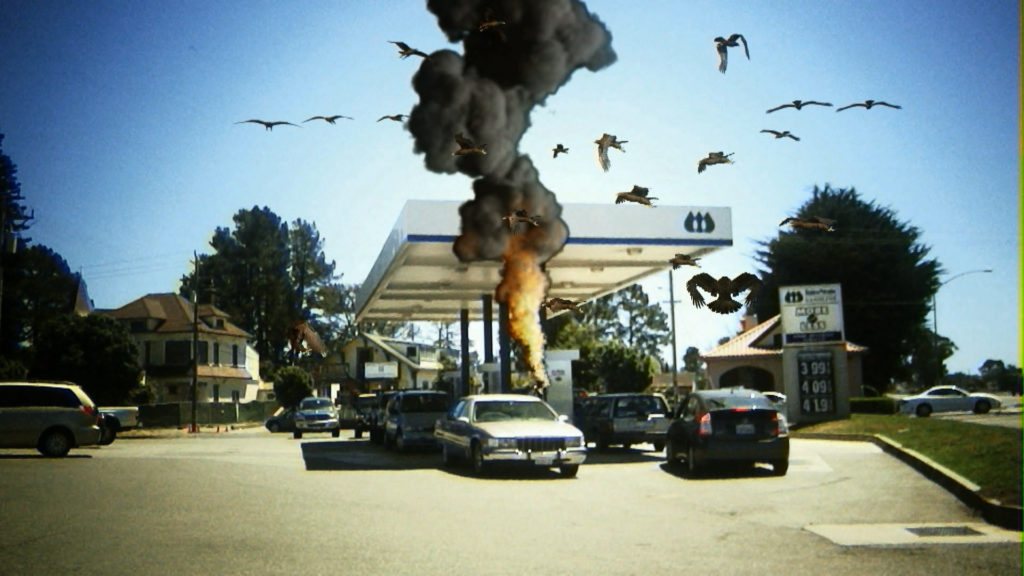 Forty-something California software salesman James Nguyen made BIRDEMIC (actually his third film) for $10,000 of his own money. He claims that the two movies that most inspired him were Alfred Hitchcock’s THE BIRDS and Al Gore’s AN INCONVENIENT TRUTH. What this means is that BIRDEMIC is a very loose and unprecedentedly amateurish remake of THE BIRDS, freed of incident, suspense, and logic, and also that the main characters mention that they went to see AN INCONVENIENT TRUTH. 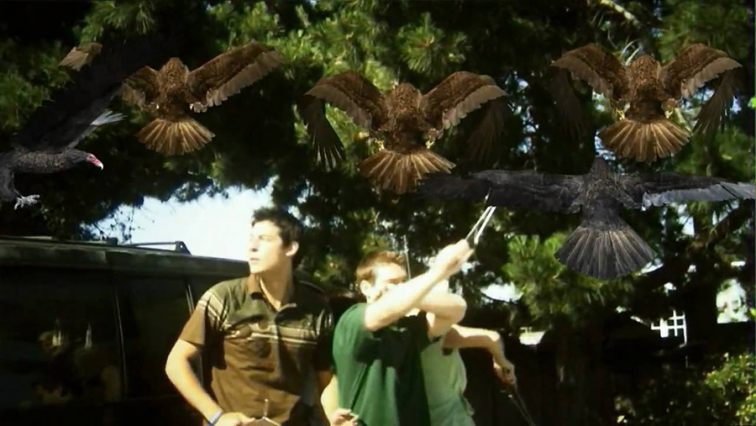 Nguyen claims that he is a director of “romantic thrillers,” but his direction strands his two lead actors, Alan Bagh and Whitney Moore, so resoundingly that they serve as lifeless automatons, delivering expository dialogue full of non-sequitors.  Nguyen holds his camera on scenery for unbelievable lengths of time, plays cheerful music under scenes that are meant to be dramatic, and careens from scene to scene without warning.  No matter how I describe it, the action scenes are clumsier than you can possibly imagine, and yes, there are also two sex scenes.  This movie also serves as the most conclusive proof ever needed to establish why $10,000 is not remotely enough for a special-effects budget, let alone an entire feature film.  The special effects in this movie are so terrible that your eyes will explode.  The attacking birds are one-dimensional, simplistic, repetitive, and completely unintegrated with the human performers they’re supposed to be attacking.  The conversation scenes are no less mind-boggling and disconnected.  One encounter, late in the film, is full of expository dialogue about redwood trees, and literally ends when a mountain lion (never again to be mentioned) interrupts it.  It’s really unimaginable that anyone ever watched any single scene in this movie, reclined in their chair, put their hands back and their feet up and said, “At last, my work is finished.”  Every single student film I have ever seen is superior in craftsmanship to BIRDEMIC.  It really has to be considered one of the most inept movies ever to charge admission. 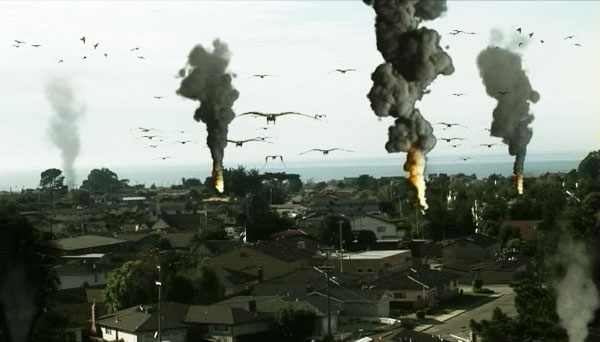 Then why is it so damn fun to watch?  It’s not schadenfreude – James Nguyen is, by every appearance and interview, very proud of his movie and of its notoriety as a cult object.  He’s had far more success and attention making a supremely terrible movie than many aspiring filmmakers.  He genuinely feels that he made a worthy tribute to his favorite director, Alfred Hitchcock, that he has made a movie with an important environmental message, and that he made a personal, emotionally affecting and satisfying movie.  Seriously, you’ll have an amazing time watching this movie with a crowd, but you’re still only getting half the experience if you don’t dig up James Nguyen’s interviews and commentaries.  The lack of self-awareness is absolutely hypnotic.  But why not be deluded? BIRDEMIC is a legitimate cult phenomenon.  Audiences love it.  It’s terrific fun, regardless of one’s reasons for enjoying it.  And a sequel is forthcoming.  It’s somewhat amazing to see a movie that is the exact opposite of everything we know to be good about movies.  It’s almost liberating to watch a director work without a single consideration towards the accepted laws of cinema.  It’s kind of nice to see someone work hard and achieve their dream – to have crowds of people see a movie he made, and to get to make more!  James Nguyen is at the top of the world.  Don’t tell him his world isn’t real.

BIRDEMIC: SHOCK AND TERROR screens tonight at 9:30pm, at the Alamo Drafthouse in Downtown Brooklyn.