Once these little shits reach 10 they will

find new ways to torture and kill you.

HALLOWEEN has been one of my favorite films since the moment I first saw it in the mid 80’s. Michael Meyers defined horror with his slow and menacing walk and the way he just appeared in the background. Even more terrifying was Meyers as a kid in a clown outfit grabbing a knife and making staby-staby on his sister. The thought of that tapped danced all over my nightmares for a good couple weeks. BLOODY BIRTHDAY won’t give anybody nightmares, but it will provide some wicked laughs, great kills and one of the most famous nude scenes of all-time.

During a total eclipse, three children are born simultaneously and become stone cold killers because of the cosmic event. As their tenth birthday nears, they pick up guns, bow and arrows, and other tools of death to pick off their parents, teachers, and friends one by one. Important note for all the parents to-be out there: if you’re ever in the hospital giving birth during a solar eclipse, shoot that kid out of the baby popper and run like hell. If there are two other simultaneous births, see the previous note but now get out of dodge and move a few states over. Fucking terrible things will happen if you don’t take my advice. Once these little shits reach 10 they will find new ways to torture and kill you. 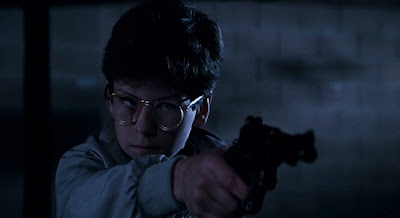 BLOODY BIRTHDAY is a smart film. Sure, we have seen the killer kid idea before, but it has never been this fun. It doesn’t go for straight horror; instead it appreciates the humor of the situation while also having a cast of kids that could slaughter THE GOONIES in a heartbeat. They are the kids you just don’t want to fuck with. These kids could take on a dream team of Charlie from FIRESTARTER, Gage from PET SEMETARY, and Damien from THE OMEN and still own all kinds of ass. Writer/Director Ed Hunt and his screenplay partner Barry Pearson put together a film that knows exactly what it is and what it wants to do: kill some people, show some boobs, and unleash three hell-spawns on the world. Now, who hasn’t been there before?