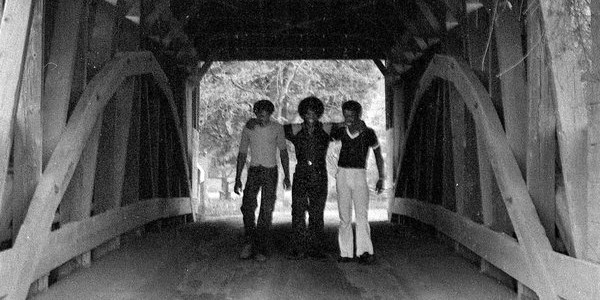 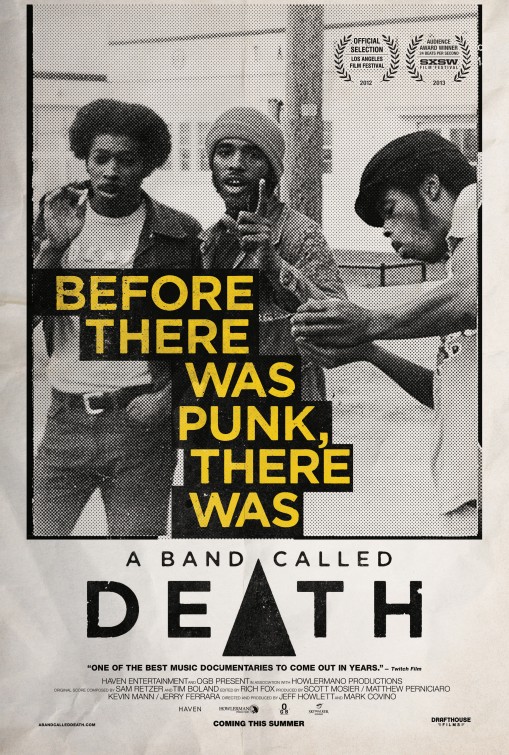 A BAND CALLED DEATH tells at least three different stories, and all of them are earth-shakingly profound.  The first is historical:  The story of Death is a pivotal story in the history of punk music.  Death, a rock band in Detroit in the early 1970s, was only recently rediscovered by musicians and journalists, but they are tremendously significant.  Three of the four Hackney brothers, David (guitar), Dannis (drums), and Bobby (vocals & bass), were sons of a minister who originally played R&B music, but switched to rock n’ roll after witnessing the baroque showmanship of Alice Cooper and the go-for-broke musicianship of Pete Townshend.

Culturally speaking, some of the fascination surrounding Death concerns the not-insignificant fact that these were three young black men playing with energy and urgency in a typically white milieu.  Their sound was faster and louder than most rock n’ roll of the era, having far more in common with groups like Iggy & The Stooges and The MC5 than with rock bands like The Beatles or The Who, let alone The Isley Brothers or any other band whom America might have expected them to sound like. 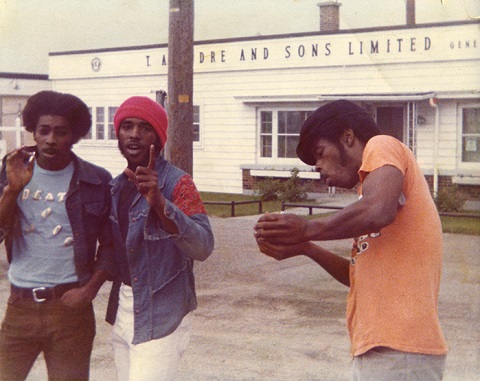 Death was unprecedented and therefore they were difficult to classify at the time.  As Questlove from The Roots notes in the film, Death was doing The Ramones before The Ramones got around to it.  As Vernon Reid from Living Colour notes, there was no doubt in Death’s sound.  There was a confidence and a sureness to it.  As Bobby and Dannis Hackney, the surviving members of the band, tell it, this sense of purpose came from their younger brother David, who named the band, designed their logo, and wrote all the songs.  With humility that nonetheless sounds cogent and objective, Bobby and Dannis repeatedly credit David with the foresight, integrity, and creativity that powered the band.  All you have to do is listen to the music to hear that it has a fiery timelessness.  Bobby and Dannis suggest that the price tag on integrity can be expensive — David turned down a life-changing record deal because he wouldn’t buckle to pressure to reconsider the band’s name, which was off-putting to some but had tremendous significance to David.  More on that in a moment.

Documentary directors Jeff Howlett and Mark Covino juggle multiple stories and themes with tremendous acuity — A BAND CALLED DEATH is engagingly designed on a visual level, and it has a momentum to match the music soundtracking it.  Their film is relaying a footnote of major significance to American music history — Death’s music feels genuinely important in the grand scheme — and yet the film manages to track the human story with uncommon grace and power.  David Hackney is a powerful presence in the documentary, despite only appearing in still photographs and in recordings of his voice and music.  David was a troubled soul but by all accounts, a beautiful one.  He believed in the music he and his brothers were creating and he has been proved right on all counts by retrospect.  This is the second story the documentary tells, the emotional story.  After passing up the record company deal, the brothers put out a limited independent release of their songs, but Death never quite caught on and at some point they chose to move on.  Dannis and Bobby started a reggae band called Lambsbread, and David eventually succumbed to lung cancer.

Around five years ago, some crate-diggers (including Jello Biafra) started passing the scarce copies of Death records around.  Some of the songs hit the music blogs, at which point the New York Times came calling.  (This is where I, and many other music fiends, first heard the standout track “Politicians In My Eyes.”)  More amazingly, Bobby Hackney’s sons, Julian, Urian, and Bobby Jr., musicians in their own right, were so moved to hear their father and uncles on record playing some of the fiercest rock ever, and toured the country covering Death’s songs in a band called Rough Francis (a tribute to one of their uncle David’s nicknames).  I know I’m doing an inordinate amount of recapping here, but the point I wanted to make by doing it is that these are clearly wonderful kids, this is clearly a wonderful family.  I was so touched by this aspect of the movie — the emotion, the beauty of family.  Family will save you.  Family will redeem you.  Julian and Bobby and Urian brought their uncle David to victory ten years after he died.  What is more beautiful than that?  As Brian Spears, a simpatico record executive, points out in the film (and trailer), there just aren’t any other stories like this one.  It’s truly transcendent.

And that is the third of A BAND CALLED DEATH‘s stories — the spiritual side.  David Hackney named the band Death not to intimidate or to shock, as many may have assumed.  The band’s music was emphatic, but not aggressive.  David named the band Death with a redemptive goal in mind, seeing as how the notion of death carries such negativity in so many minds.  Essentially, he wanted the awesomeness of the band and the conspicuousness of its name to do nothing less than to frame the notion of death in positive terms.  Like birth, it’s a thing that happens to all of us.  Like birth, it’s an aspect of existence we have absolutely no control over.  David Hackney seemed to be a tormented genius, but he had an uncanny perceptiveness.  His brothers recount how he accurately predicted his own death, but also how he accurately predicted that one day the world would come looking for Death’s music.  He was right, and he was right.  At press time, Dannis and Bobby are back in the game and Death lives again. A BAND CALLED DEATH is a movie that communicates actual spiritual redemption.  It challenges your very perception of a natural occurrence, the end of life, and as such it has the power to inspire.  You don’t have to be religious to believe in that.