DEVIL’S GATE features the cruelest trick a mediocre movie can pull: it has a great opening shot. A striking high angle shot of a gravel road running through a flat, desolate stretch of land opens the film. Dark clouds just starting to blot out the sunlight dwarf the road, giving the impression of an unseen force staring down on the nothing bit of land with its lonely road. It is an ominous shot with which to open a horror movie and actually taps into the kind of cosmic horror that the rest of the film tries and fails to pull off.

In fact, the scene that follows that opening shot is pretty decent. A motorist traveling along the gravel road has his car suddenly die, as though a supernatural force just killed the engine. He walks to a nearby farmhouse where he ignores the numerous “no trespassing” signs, barbed wire along the top of fence surrounding it, and a barking dog. Not surprisingly, he steps into a bear trap, from which he escapes, only to stumble into an even more sinister trap and a grisly demise. Alas, from there, the rest of the film happens.

FBI Agent Francis (Amanda Schull) travels to a remote part of North Dakota to investigate the disappearance of a mother and her son. She runs into the typical movie interference from the local Sheriff (Jonathan Frakes, looking like he wandered over from the set of a western where he is playing a gigantic mountain man), ropes naïve Deputy Colt Salter (Shawn Ashmore) into taking her to see Jackson (Milo Ventimiglia)—the husband and father of the missing duo, and discovers the supernatural truth behind the disappearances. 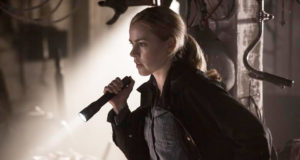 There is nothing especially original about the plot of DEVIL’S GATE. Agent Francis is haunted by a previous missing person’s case that went badly, so she is often blinded by the strange circumstances surrounding the case and zeroes in on the clearly unstable Jackson as the prime suspect. Jackson is a religious nut who claims to have some sort of direct line to angels that are supposedly protecting him and his rundown farm. Colt is the local, nice guy law enforcement who is star-struck by having an actual FBI agent in his car. As the plot goes increasingly into supernatural territory with Jackson revealed to have a strange creature locked in his basement and his “angels” appear with sinister motivations, the proceedings begins to feel a bit like an X-Files fan film with a decent budget.

Working from a screenplay he co-wrote with Peter Aperlo, director Clay Staub at least keeps the film moving forward. It only takes a few minutes once Agent Francis lands at the airport to get her and Colt to Jackson’s farm. Once there, things quickly escalate into full on supernatural horror, but the second act of the film does finally slow down and attempt to become a claustrophobic, character-based thriller with Agent Francis, Colt, and Jackson arguing with each other as the creature in the basement screams and an epic, cosmic storm brews overhead.

The problem with giving over a thirty-minute chunk of the film to the three lead characters to fight, plan, and shift alliances is that none of them are that interesting or well-drawn. Agent Francis is written as a stick-in-the-mud and Schull phones in her performance—but you can’t really blame her. Colt never evolves from well-meaning, inexperienced cop and spends much of the second half of the film hanging out in the background of shots. Jackson is the closest thing to an interesting character and Ventimiglia has the good sense to chew the scenery, making his crazed hermit an enigma that falls somewhere between villain and victim. But Ventimiglia can only keep things interesting for so long before his turned-up-to-eleven performance becomes tiresome.

The digital cinematography by veteran D.P. Miroslaw Baszak sports the kind of unnecessarily washed-out look that borders on black and white. It is distracting and adds nothing to the film. Coming after the excellent opening shot, it is a real disappointment to find the rest of the film shot in such a drab, flat manner. 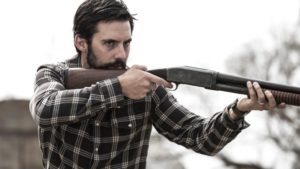 There is a decent snap of the tail to the third act of DEVIL’S GATE that does hint at the sinister tone the film clearly was going for. Unfortunately, the disquieting implications of what has happened to Jackson’s wife and son and how that traumatic moment changed him forever are lost in an over-bearing visual effects light show as Staub goes for the big ending that does not fit the smaller nature of the rest of the film.

There was potential for a tense, compact sci-fi/horror tale at the heart of DEVIL’S GATE, but Staub goes for a muddled alien (demon?) conspiracy that leaves the characters behind. Weirdly, that attempt to tell a convoluted story with several twists in the final twenty minutes makes the film feel less ambitious and more like run of the mill hokum.

Scream Factory has given DEVIL’S GATE a barebones (aside from a perfunctory trailer) DVD/Blu-ray combo release that streets on Tuesday, June 5th, 2018. 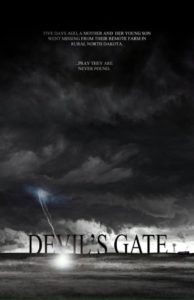