Expectations are a tricky thing when approaching a film for the first time. If something is effusively praised and built up before seeing it, that creates a lot of hurdles the movie has to surpass and an unfair burden it must carry. However, if the marketing and premise makes it seem incredibly disposable, then the movie easily sails over that low bar when it didn’t really earn it. It’s hard to approach any film on its own terms and in its own way, but that should be the goal every time a new (to you) cinematic adventure unfurls. BUS PARTY TO HELL (previously titled PARTY BUS TO HELL and most likely re-titled so it pops up closer to the top when looking at streaming/VOD services) had a lot of negative strikes against it before I hit “play.” The trailer opened up with a bathroom scene, the most notable actor was the former host of TARADISE, Burning Man played a pivotal role in its plot, and the director had mostly toiled away in the softcore trenches of multiple EMMANUELLE movies. But instead of being ill portents of a bad movie, these elements help make BUS PARTY TO HELL being a fun throwback to a very specific genre entry that could end up being perfect for a distinct target audience.

A group of mismatched folks all board a bus from Las Vegas to Burning Man, the free love and gonzo art festival. After the driver pulls off the highway for a shortcut, the passengers soon find themselves stranded in the desert and quickly besieged by murderous cultists. As they get picked off by the bloodthirsty villains, the survivors must band together and figure out a way to get out of this increasingly dire situation. 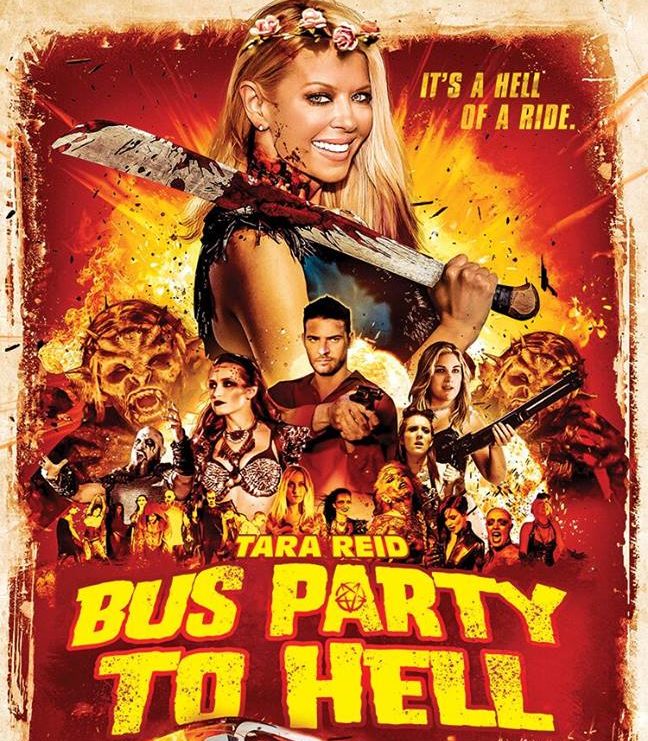 BUS PARTY TO HELL is an incredibly flawed film. There are major issues with editing, the sound mix, some sloppy CGI, unrefined makeup, atrocious acting, and also it seems weird that an 81-minute movie has about three different endings, like a Troma version of RETURN OF THE KING. There’s barely anything resembling character work, a lot of the jokes don’t land (I can’t tell if it’s sad or brilliant they make a reference to the “Tastes Great/Less Filling” Miller Lite ad campaign of the ’70s and ’80s), and on and on, with a bunch of reasons why this title won’t be coming to the Criterion Collection any time soon. However, with these major caveats and asterisks… it’s actually a pretty good time. If anything, writer/director Rolfe Kanefsky (working from a story by producers Sonny and Michael Mahal) could have shaved about 30-40 minutes from this and delivered an amazing short. But, as it stands, it delivers about what one would expect from a film called BUS PARTY TO HELL: blood, jokes, and boobs.

Kanefsky has made a ton of movies (many of them of the softly- lit, sexual nature that air late at night on premium cable), but he made his start with 1991’s THERE’S NOTHING OUT THERE, which was an oddly meta horror sci-fi movie about teens in the woods versus aliens. That same fun attitude, paired with a pretty keen knowledge of genre staples, are on display in BUS PARTY TO HELL as well. The bevy of references (either subtly or explicitly made by characters) covers RACE WITH THE DEVIL, THE HILLS HAVE EYES, MAD MAX, FROM DUSK TILL DAWN, amongst others. Some of these nods are groanworthy, some are fun for fans, but all establish that Kanefsky is aware of the tropes from which he’s pulling, but is doing something rather interesting with them. As the climax builds and the cultists are targeting a specific member on the bus, the script zigs instead of zags, but in a totally earned way that is enjoyably clever. And I’ll cop to laughing out loud a total of four (4) times. 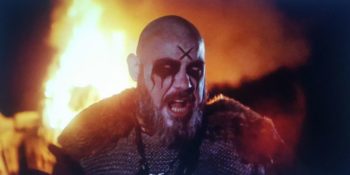 Despite that litany of issues with the movie above, there are some genuinely good parts of BUS PARTY TO HELL. A lot of the acting is piss-poor and so broad it takes up all of the screen, but Shelby McCullough honestly shines as “Ivy,” and delivers a natural performance that could otherwise have easily been nothing more than an extended punchline. Sadie Katz as the bus driver is basically doing a subdued version of Sheri Moon Zombie, but her performance works as a fun and campy bit of mischievous sleaze. A bunch of the gore is clearly Party City Halloween prop stuff, but some of the blood and guts is well done, and the facial sculpt of a third-act monster looks great (the body costume does not). This movie, more than anything else, feels like a throwback to a very specific time and place: it feels like an extended episode of TALES FROM THE CRYPT from the ’90s. Like most of those episodes, there’s some shoddy F/X and sloppy joke telling, but it delivers on horror staples and sexy-times while seeming genuine about a care for the genre.

BUS PARTY TO HELL is not innovative or incredible, but it is an adequate time for anyone looking for a few laughs, some fun gore, and copious amounts of bare breasts. It feels like something that 12-14 year-olds will discover at sleepovers late at night on Cinemax and end up being a formative experience in shaping their sexuality. There are many ways it misses the mark, but in the end it is a fun diversion that recalls delights from horror’s past.