Umberto Lenzi’s name may not ring the same number of bells as those of fellow Italian genre stalwarts Lucio Fulci or Ruggerto Deodato, but it’s certainly a familiar one – during the ‘60s, ‘70s and ‘80s, he worked in pretty much every exploitation subgenre that Italy was known for. He’s certainly well-known to the folks here at Daily Grindhouse, as we covered his horror pic GHOSTHOUSE a while back in the Daily Grindhouse Podcast. It brought new, fond memories for all involved. [This is a blatant lie. – Everyone involved with the Podcast]

But ridiculous horror films like GHOSTHOUSE, the aerobicizing zombie antics of NIGHTMARE CITY and the savage MAKE THEM DIE SLOWLY were just a part of Lezni’s oeuvre. He made fantasy flicks (IRONMASTER), war flicks (FROM HELL TO VICTORY), giallos (EYEBALL, SPASMO), secret agent escapades (KRIMINAL, THE SPY LOVES FLOWERS), westerns (A PISTOL FOR A HUNDRED COFFINS) and poliziottesco films – the latter of which describes GANG WAR IN MILAN, the latest Eurotrash pic issued on Blu-ray from the good folk at Raro Video.

GANG WAR IN MILAN stars Eurotrash regular Antonio Sabato as Salvatore, a grocer in Milan who also serves as a pimp, controlling a good percentage of the saleable female flesh in the organized crime-ridden area. His nice little prostitution business is interrupted when one of his best girls (“She makes more in a day than the Queen of Holland!” he bellows) is found dead in the pool of a fitness club he frequents.

The death has a bit of a mystery to exactly how it was done, but the point of it is quickly established – it’s a warning shot fired from French drug kingpin Daverty (Philippe Leroy) who wants Salvatore’s girls to help with Daverty’s drug sales. Daverty offers him a deal, but Salvatore doesn’t accept, and the tensions between the two begin escalating, leading to… a GANG WAR IN MILAN! 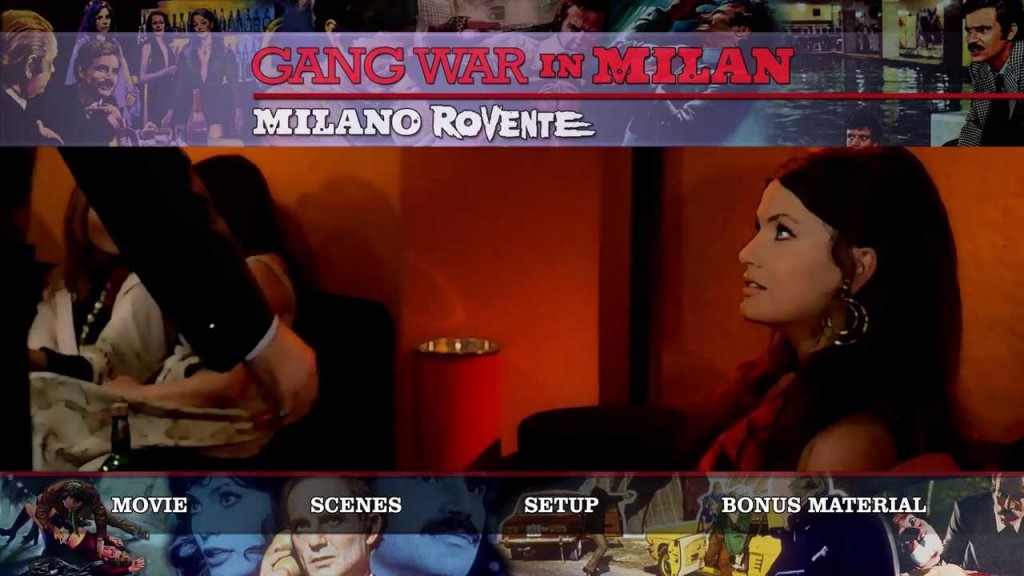 GANG WAR may not be the best example of the Italian crime film genre, though Sabato makes for a very charismatic lead despite the sordid turns his character takes. In the liner notes, EUROCRIME! Director Mike Malloy states that Lenzi claimed it was a mistake to make Salvatore a pimp because it renders him too unsympathetic – an idea Malloy counters nicely, but which does have its merits. It’s not just that Salvatore is a pimp – he’s not a particularly kindly one, essentially treating his girls as little more than product, an attitude exemplified by an early scene in which he “auditions” a new girl by having her awkwardly disrobe after talking about having her virginity taken by being raped by a cop. It’s not out of the ordinary realm of misogyny for a Eurocrime flick, and Sabato is engaging enough to make the film work so you do, in the end, end up sort of rooting for the guy, but that may have more to do with everyone around him being even more deplorable than he is. 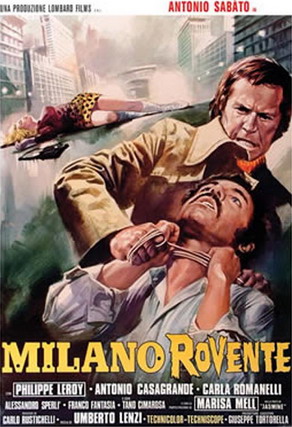 And there’s plenty of deplorable on hand, as the war between the factions takes the “they put one of ours in the hospital, we put one of theirs in the morgue” credo – especially after a deal is reached and then taken back. There’s (male) genital torture, a bus full of girls getting kidnapped, drownings, and a character discovered with his transvestite lover – certainly enough to keep any trash fan’s eyes glued to the screen.

There’s a little bit more going on in GANG WAR than just, er, a gang war, however, thanks to some backstory involving Salvatore’s Sicilian heritage (he also cares for his aging mother) and the rivalry been the Sicilian and the French Deverty based in part on their respective countries of origin. We even get a bit of anti-American sentiment at one point as Salvatore scoffs at a guy as the fellow speaks English –Salvatore ends up taking his date, played by DIABOLIK’s Marisa Mell, as his lover.

None of this gets in the way of the treachery, and GANG WAR IN MILAN is never less than entertaining, even if it never quite has the heft of other films of the genre like CALIBER 9 or Lenzi’s own ALMOST HUMAN. Granted, you’ve got to get through some of misogyny and homophobia, but not significantly more than what goes with the territory.

Raro has done a fine job with bringing the title to Blu-ray in an HD transfer with a 2.35:1 aspect ratio that looks great, especially in scenes involving Salvatore’s apartment, a wildly blue location that makes great use of excessive colors and resembles a carnivalesque aquarium. The film also includes the English dub, available for the first time in the States. The sole extra on the disc is an introduction by Malloy, in which he talks about Lenzi’s career and briefly delves into the history of how Eurocrime films were discovered by American audiences.