Designating a film as a “curiosity” often seems like a back-handed compliment – it feels like the nice way of saying that a movie, while unique, isn’t anything the casual filmgoer would be interested in seeking out, similar to how we’ll label people with weird behavior as “eccentric.”  We don’t want to be rude, of course, but we also want to make sure the person on the receiving end of the description is aware that the subject in question isn’t for all tastes.

It’s kind of a shame, as “curiosity” is the best way to describe a film like 1975’s HALLUCINATION STRIP, the latest release from Raro Video recently issued in a beautiful Blu-ray transfer.  And while it’s certainly true that STRIP’s locale, structure and sensibilities will be tough for many audiences to get a handle on due to both their unfamiliar setting (youth subversives in Italy, circa the mid ‘70s) and admittedly muddled and confusing subtext, the mere fact that it presents such an unique vision (even if much of it is unintentional) makes it a “curiosity” indeed.  When watching a new film, my most important request is that the filmmakers depict something that I haven’t seen before, and STRIP certainly fits the bill.

So, yeah, HALLUCINATION STRIP is a curiosity.  It’s a strange blend of police procedural, counter-culture drama and drug trip, and it simultaneously makes doing hallucinogens seem incredibly alluring and inevitably sinful and deadly.  It’s a weird, wild mess that has no idea what it wants to be.  And I liked it quite a bit, because it’s never dull.

The first and only film of Lucio Marcaccini, STRIP stars Bud Cort, a few years after his career-defining role in HAROLD AND MAUDE*, as Massimo, a young man and occasional drug dealer who frequents protest marches and plans to help some of his cohorts get the financial resources to go to the Orient for a spiritual retreat.  To this end, he snatches a valuable snuff box from the wealthy parents of one of his friends in the hopes of selling it for a high sum. 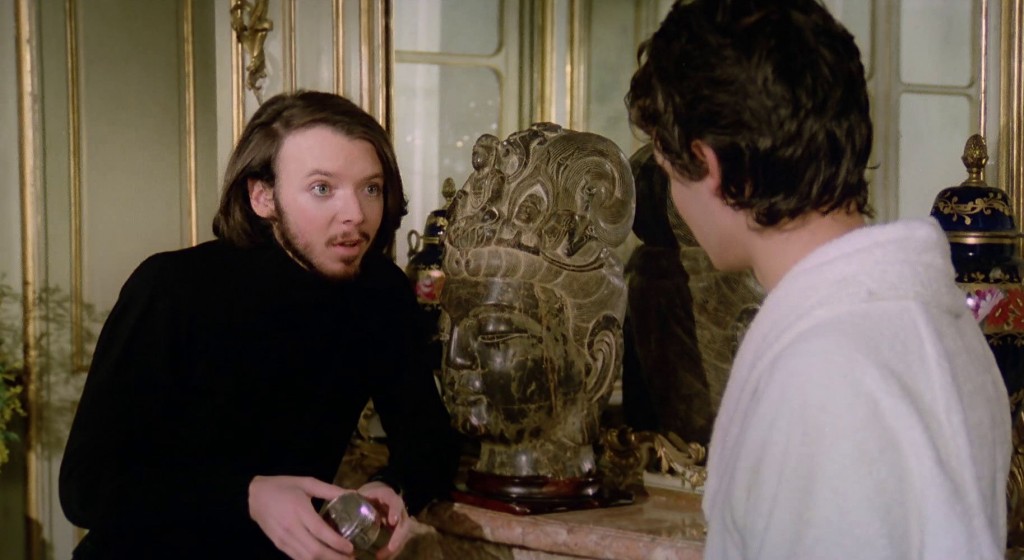 The box’s original owner, however, isn’t too keen on his property being stolen, so police commissioner De Stafani (Marcel Bozzuffi) is sent on the case to figure out who the thief is – and when it’s discovered to be Massimo, he intends to use the boy as a pawn to break a larger drug ring.  Meanwhile, the rest of Massimo’s group have their share of drama, much of it centered around the procurement of enough drugs to properly celebrate a “coming out party” for Rudy (Settimio Segnatelli), a young man whose relationship with his mother borders on incestuous.

The first half of the film comes off like an odd blend of straightforward police procedural and curious take on the drug-induced radicalist movement of the time, a movement director Marcaccini seems to view as ultimately meaningless after the end of the ‘60s, one given form by sex, drugs and cursory nods to “spirituality” without having much of a genuine voice.  The relative naivete of the characters makes sense when you realize they’re supposed to be high school aged – something you may not realize until well into the film, as most of the actors are clearly well in their 20s, including the Italian-dubbed, facially-haired Cort, whose well-intended but illogical Massimo would just be a confusing presence were it not for Cort’s memorably empathetic eyes. 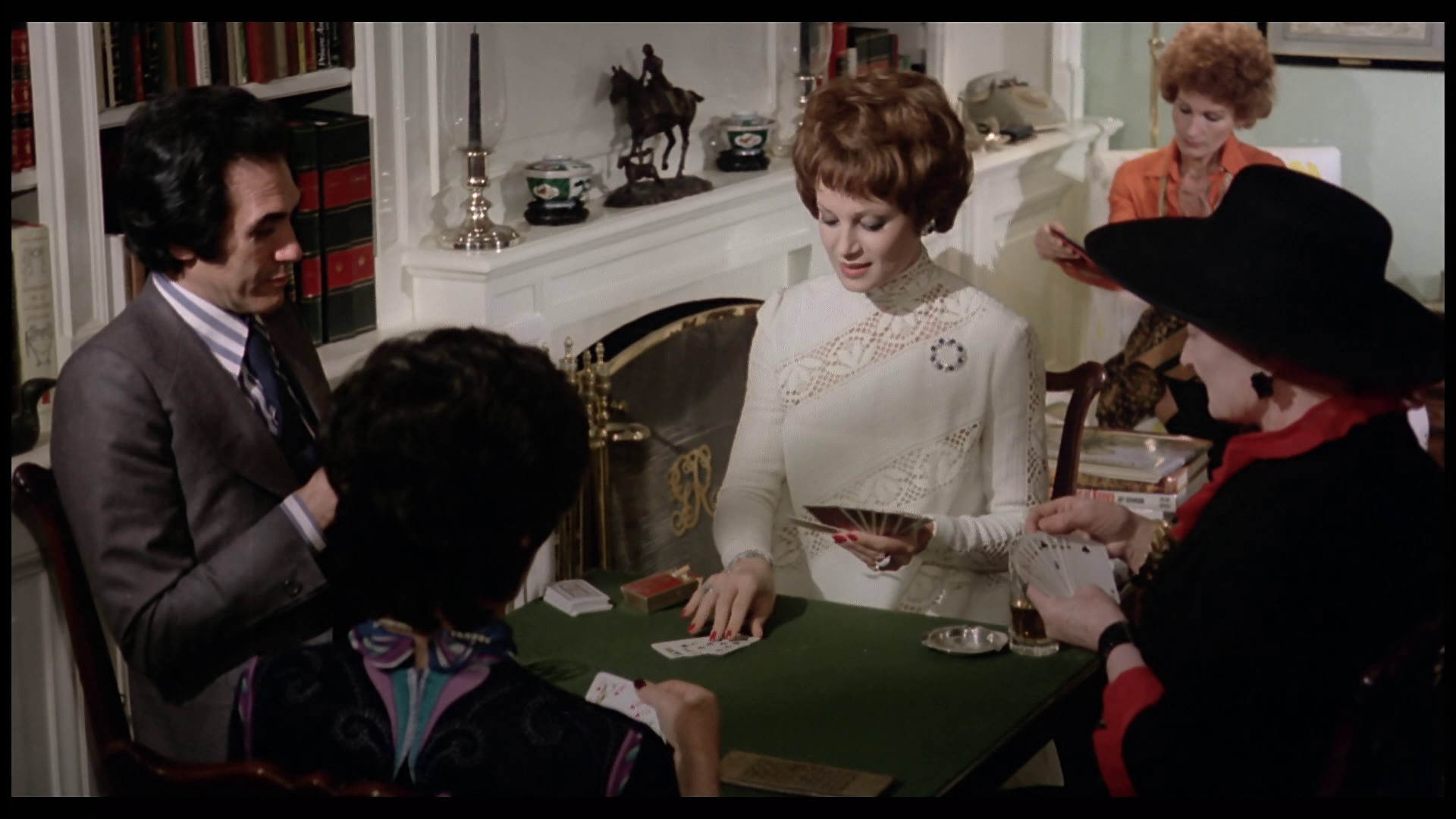 The film, however, shifts into high gear during the drug-induced hallucination sequences that make up for a fair amount of the running time.  We get asparagus people, rainbow-colored imagery, fire dancers, plenty of body paint, bad trips and plentiful nudity – essentially, everything promised in the trailer that was used to sell the film to confused audiences.  And they all look spectacular on Raro’s Blu-ray release, with the colors popping off the screen to great effect.

The mixture of splendidly trippy sequences and an overriding morality that casts judgment on the audience for enjoying them is a common issue in many “trip” films of the era – heck, even Roger Corman’s THE TRIP ended with a cracked mirror indicating the LSD user’s “inevitable” conclusion – but HALLUCINATION STRIP is even more of a question mark because the film itself is such an oddity.  The police commissioner is presented mostly in a positive light but his drug paranoia occasionally goes off the rails, great efforts are made to explore the relationships between the “kids,” but few of the characters really connect and many of the relationships are confusing, and the end result is a counter-culture film that seems to question the idea as to what counter-culture is all about, albeit in the most cryptic way possible.

An interview with editor Giulio Berruti lends some light as to why the film is such an oddity.  The first-time director was unprepared for the job, and found his bidding overtaken by actor Bozzuffi.  The results are certainly a bit of a mess, but Berruti did a splendid job of making the film flow well knowing the backstory, so while you may not have much of an idea as to what’s going on or what the film is trying to say, you may not notice until after the credits roll – especially if you’re on the same narcotics in which the characters in the film imbibe.  Two trailers are also included, along with liner notes from Nocturna Cinema that attempt to make sense of it all.

HALLUCINATION STRIP doesn’t feel like the film anyone behind the scenes intended on making, but the end results are enough of a “curiosity” to be more interesting than the standard police-detective-against-the-radicals film it certainly could have been.  Sure, it’s muddled, and Cort seems more than a little lost in the Italian social politics of it all, but thanks to a visual flair and a look at an interesting time done in a very unique way, STRIP is never less than engaging.  It’s definitely a “curiosity” more than anything else, but who the heck wants to watch a movie you’re not curious about?