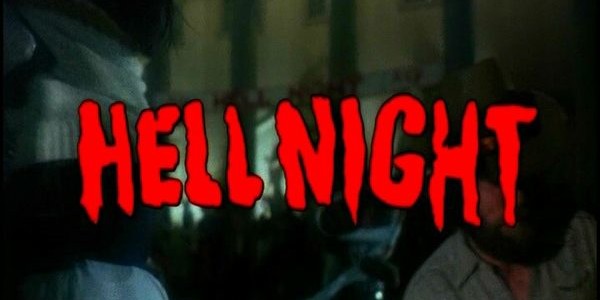 Like FRIDAY THE 13th: A NEW BEGINNING director Danny Steinmann, Tom DeSimone started out toiling in adult entertainment (one highlight — a film called CHATTERBOX that’d be right at home on the Vinegar Syndrome label) before making his way to mainstream low-budget fare, their careers even intertwining a few years after HELL NIGHT on the 1984 feature SAVAGE STREETS. DeSimone is listed as a director, but Steinmann finished the feature, and even dragged Tom’s brother Bob along to get hacked up in A NEW BEGINNING (LANA!) the next year. The reason I bring up Danny Steinmann in discussing Tom DiSimone and HELL NIGHT is that despite both director’s careers starting out in practically the same place, one of the directors (DeSimone) ended up being the stronger of the two in every conceivable way. 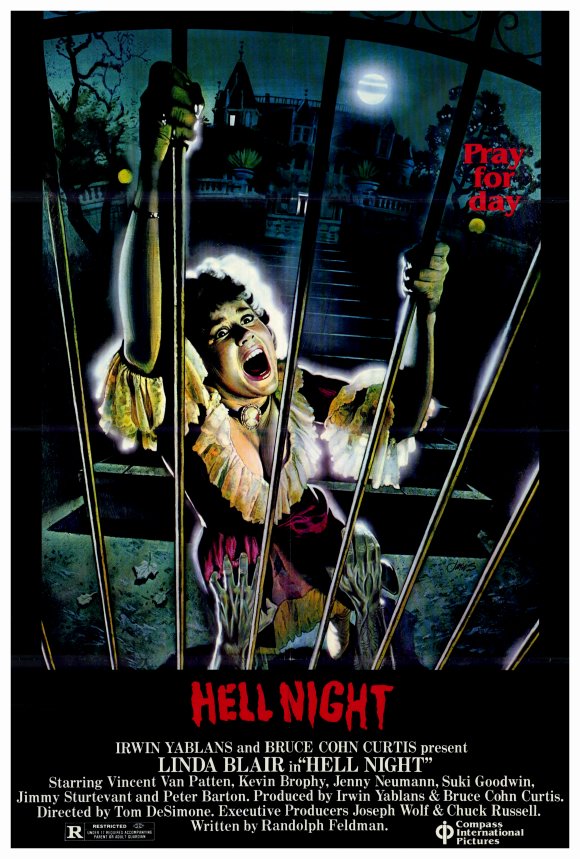 Look, I love A NEW BEGINNING and see it as the white-trash giallo that it is, but it’s clear that Steinmann took away one facet of his directing career in adult entertainment namely the overacting, the focus on the more titilating aspects of the feature, in this case, the gore and nudity and a ludicrous disconnect between kills, scenes and characters. The difference between the former’s direction and DeSimone’s direction is (hell) night and day, showing that clearly DeSimone took the low-budget constraints of his features and utilized that to make one of the pantheon slasher movies, sitting right alongside THE PROWLER, MY BLOODY VALENTINE, and JUST BEFORE DAWN (using the last as an example becuase they both feature — SPOILERS — two killers instead of one, this reveal of Killer #2 is way better that JUST BEFORE DAWN‘s, I think).

Because HELL NIGHT came out in 1981, it was in a precarious place for slasher films. It was still swimming in the wake of FRIDAY THE 13th, but hadn’t yet adopted the emphasis on gore (though there are shots of gore as the victims are dispatched akin to watching a heavily-edited TV version of a slasher) over scares, and there are plenty of scares. My favorite scene is a simple stationary shot of the two leads hiding in a room, the door barred up — they know by now, the killer is out there somewhere — and the shot slowly reveals the killer entering the room secretly, unbeknownst to the two heroes. Or it’s just simple stuff like one of the prankster pledgemasters realizing slowly that something is amiss right before he discovers the body of one of his friends. It’s shot so creepily with tons of atmosphere, a candlelit ghost story (I love the long monologue with the head pledgemaster telling the story of Garth Manor, and the camera panning over to show the structure in the distance right as ends the story, and a shiver involuntarily runs up your spine) that sets it above any cheap knockoffs that came after and frankly before it. My only complaint is that the film runs a little too long, but it’s still an enjoyable ride nonetheless. 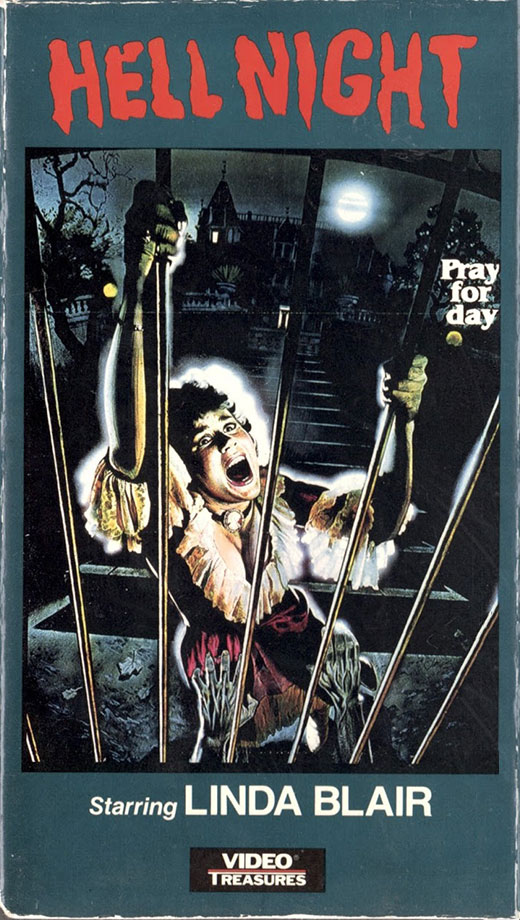 I remember watching HELL NIGHT on one of the back catalog premium cable channels (FLIX or ENCORE) a couple of decades ago, so my memories of the film are hazy at best (I could’ve bet cash that it was Jamie Lee Curtis in the film rather than Linda Blair). I could recollect certain elements of the film like the sorority hazing concept and the ensuing pranks set up by the pledgemasters, the (again, spoilers!) two killers instead of the one, whatever they mean when they called the villains of the film “gorked out,” and lastly the kickass song that plays over the opening credits, so it was clear I was due for a revisit. 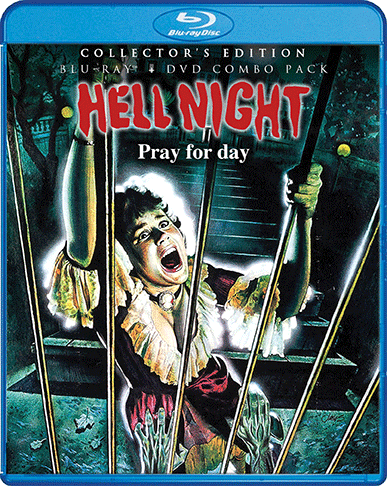 My favorite part of the Scream Factory Blu-Ray has nothing to do with the film or its features, but rather the disclaimer at the beginning of the Blu-Ray where Scream Factory apologizes for the quality dips in certain parts of the film due to restoration issues. It’s not a problem for me at all a) it really isn’t noticable at least to me, and b) the quality dips are part of a certain charm in the movie, reminded one of the VHS quality of a film like this. It enhances HELL NIGHT rather that diminishes the feature, in other words.

As for the bonus features, Scream Factory has loaded this set with some choice bonus features: Peter Barton has his own bonus feature where he recalls the film, looking back on it fondly (though after reading Crystal Lake Memories, his conversation around HELL NIGHT was a whole lot different – spoiler alert, he did not want to do the film and had to be boozed up in order to be convinced to do the film), a set of interviews where the actors interview each other. This is a new type of feature that’ll hopefully start a trend in these Blu-Rays for older horror films (all genres, really) because talking heads can feel so disconnected and stuffy, and if two actors are talking about a shared experience, it feels more authentic, and if it’s more authentic, it makes the purchase worth it. Because I have a packed schedule, I didn’t even have time to watch the commentary, but because it’s a Scream Factory Blu-Ray, you can rest assured, you’re getting a locked and stocked disc that’s well worth your time.

During a late night bout of Friday the 13th: The Game, I mentioned I was going to be digging into the new Blu-Ray of HELL NIGHT courtesy of our friends at Scream Factory. A friend of mine mentioned that HELL NIGHT was one of his go-to viewing options for Halloween, and after revisiting it, I can see why it’s one of the best Halloween movie watches (dark spooky house movies are always a good choice for horror-movie marathons). It’s been largely unavailable for quite some time, but luckily for us, Scream Factory exists and has provided us with a lovingly transferred Blu to start a new Halloween tradition.