When I was a kid, the options for horror video games were limited. I was obsessed with Zombie Ate My Neighbors on my Super Nintendo, and I remember loving a crazy zombie baby that would chase me around the mall. It wasn’t until my early teens that I discovered Silent Hill for the Playstation, and began my love for survival horror. I spent hours roaming the supposedly deserted town, sometimes hesitant in venturing onto the side streets,as pixelated fog smothered my view from what was hiding within. The objectives weren’t always so clear, and most times it was better to avoid confrontation from the monsters who manifested from the town’s violent history. I became a lifelong fan of the franchise; always excited when a new installment was announced, and sitting opening night for the film adaptations (yes, I even love REVELATIONS 3D). But video games have been lacking in one major horror icon. While Jason Voorhees has had previous incarnations in the video game field, now with Friday the 13th: The Game, fans can experience first-hand the terror we’ve only been spectators to for decades.

The objectives of Friday the 13th: The Game are kept simple: kill, survive, or escape. Players can play a camp counselor or Jason, but every round is random, so there’s a big chance you’ll be playing a victim several times. As a counselor, you’ll be given a time period to survive or escape. Escaping is a challenging, but better, option. There are two cars and a boat provided in each map. One car can seat four people, while the other can fit two. The boat only fits two. Any of these can be used to escape — however, items are needed to get them running. This is easier with the assistance of other players, to get different items to get them going faster or to keep on the lookout for Jason. These items aren’t easy to find or apply, as they are hidden within the many cabins you have to search through while avoiding Jason. Once you find an item and manage to make your way back to the car or boat, a mini-game will start, with players having to hit specific buttons on their controller when prompted. Timing is key, as Jason gets alerted every time the wrong move hits, and can make his way rather quickly to the car and can prevent players from surviving. Even when you get the car running, make sure the best driver is behind the wheel, as you still have to maneuver your way to the exit, and Jason can still prevent you from leaving. (Here’s some good advice: Don’t try to run him over!) 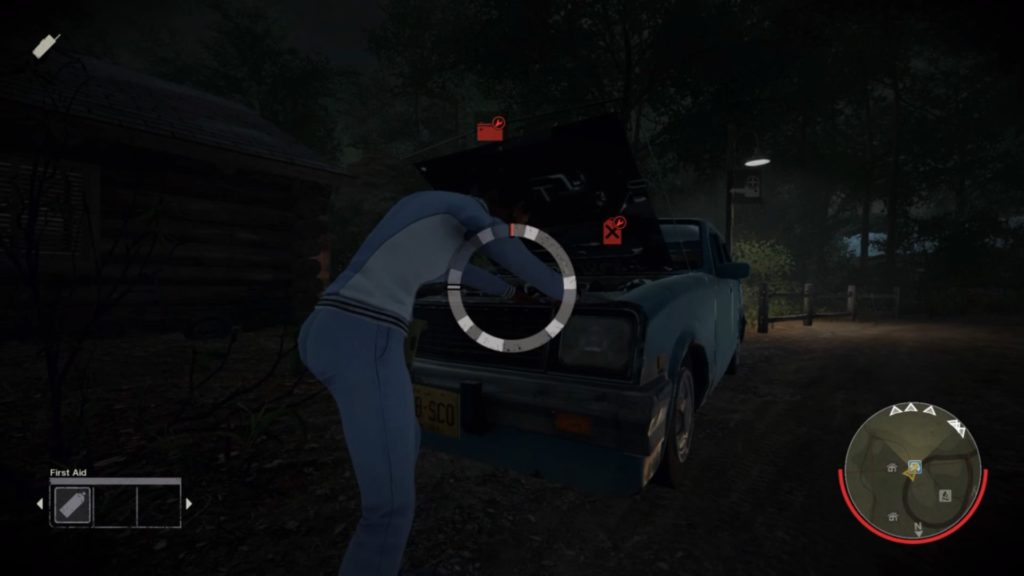 Lots of fans are taking joy in getting the chance to play Jason, one of the most famous cinematic killers. As Jason, you have one mission: Kill everyone. Jason has heightened senses, and can easily spot where potential victims are, and can make his way rather quickly to them. I was able to play as him twice, and I have to admit that I sucked so bad the first time around. Jason has many special abilities, such as morphing to different spots around the map to get to victims faster, and “stalking,” which helps in avoiding the counselors getting alerts that Jason is near. Every counselor managed to survive during my first round as Jason, and that was a major letdown. Still, I had to remind myself that I was learning the controls, as I was used to being the counselors so many times, and their gameplay works much differently. My second time as Jason was a bigger success, as I killed off four of the seven counselors by choking them to death and gouging their eyes out. I learned that busting out the windows of the cabins which counselors are hiding inside increases their fear levels, causing them to be more vulnerable, much easier prey. At one point, I walked into a cabin and was signaled to a bed, realizing that someone was hiding underneath. I grabbed my machete and jammed it down, impaling the hiding counselor beneath. It gave me great delight to hear the player cursing into my headset when he realized he was found.

With all that being said, this is an online-only game, which really ends up making it all the more fun. I got a few of my friends to log on at the same time, and we created a private party so we could play together along with some new players. With our headsets on, we were able to notify each other if we saw Jason somewhere, or if the gas tank we needed was nearby. Even better is that your game isn’t over when you die. When a counselor gets killed, they become a spectator, and can switch between the still-living characters and help guide them towards surviving. I once made it out early with another friend, but had to tell the other players to not even bother looking for the car keys, as we accidently took them with us on our boat. Communication can also be a setback, as whoever is playing Jason might get a heads-up as what the strategy is, and make his way to killing everyone much faster. 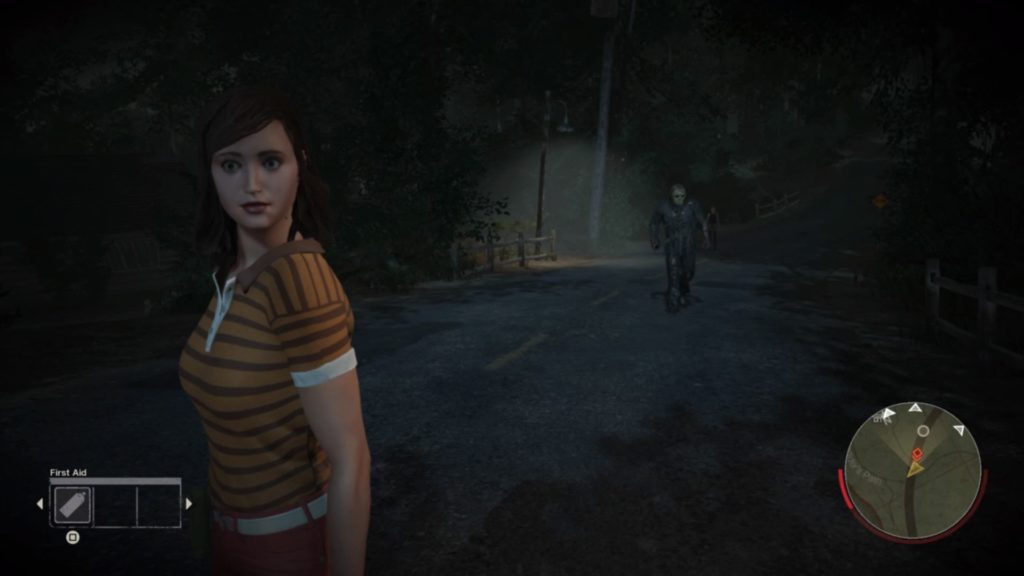 The more you play, the more points you get, and  that can be used to customize counselors and Jason, and even earn different Jason kill moves. Stamina is a huge part of the game, as every character has their strengths, but running full-speed makes you run out much faster. Even walking at a quick pace can get you exhausted, which works to Jason’s advantage. Standing still or crouching helps get that stamina back, but make sure you’re doing it nowhere near Jason. Another warning is to be careful who you play with: I found myself being used as a distraction for Jason while another player got the car started and drove off while I was being slaughtered. This is one of those games where you find out who your real friends are.

Die-hard fans will be pleased with the details and love put into the game. Different variations of Jason are playable or capable of being unlocked (no JASON X though, sadly). Fan-favorite Kane Hodder serves as Jason using motion-capture technology, and Tom Savini participated in the development as well. Familiar environments from the sequels and the infamous score will surround players who have been dying to venture into the franchise. One of my favorite aspects is that a lucky counselor can stumble into Jason’s home, where his mother’s severed head sits. There, a player can put on his mother’s sweater and use it to their advantage to confuse Jason, preventing him from temporarily attacking. When extra help is needed, Tommy Jarvis can be called upon for assistance, as he is a much stronger character and can be played by a deceased player. When playing with friends, you can tell who loves the movies, and who has no idea who Tommy is. 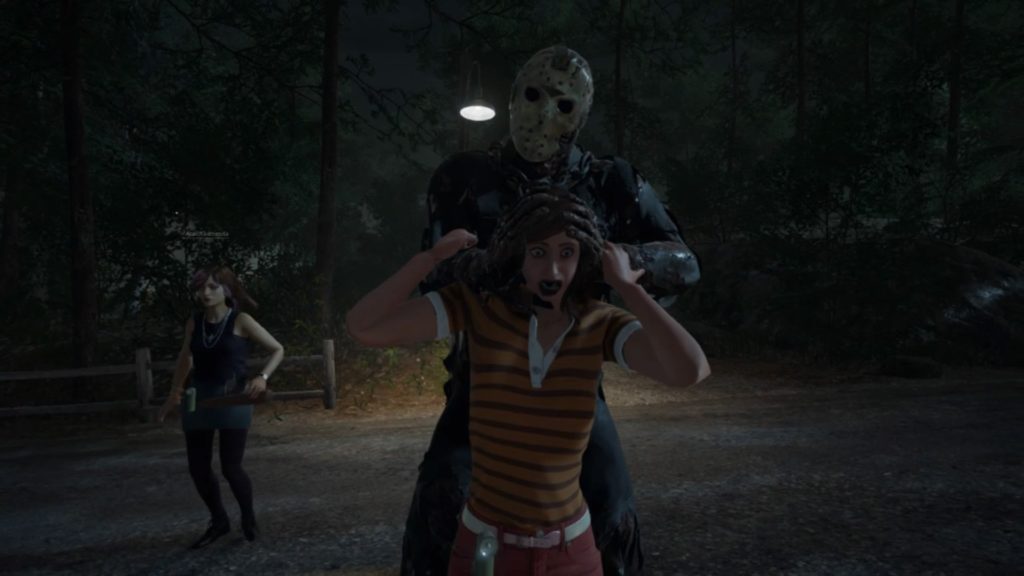 Friday the 13th: The Game is an incredibly violent good time. With different graphic methods of killing, and hearing the screams of scared counselors, the game reminds me of spending my Saturday nights watching teen slashers during a sleepover. Nostalgia for the 1980s is making a huge comeback, and it is more than welcomed. Playing the role of one of the world’s biggest momma’s boys is a dream, and the wait was well worth it.