Earlier this week, I took a look at why the films of Chester Novell Turner are so fascinating – a genuine outsider to the world of film, his work comes from a place that’s uniquely his own vision.  NIGHT TRAIN TO TERROR, just released as a Blu-Ray/DVD combo pack from the reliably excellent Vinegar Syndrome, is a fascinating film as well, though for entirely different reasons.  While Turner’s films are products of one man’s efforts, NIGHT TRAIN TO TERROR is interesting because it’s the accidental product of a committee, a bizarre melding of unfinished films into one stitched-together feature, a Frankenstein’s Monster of a horror movie that manages to be surprisingly entertaining solely because there’s clearly nobody at the wheel. 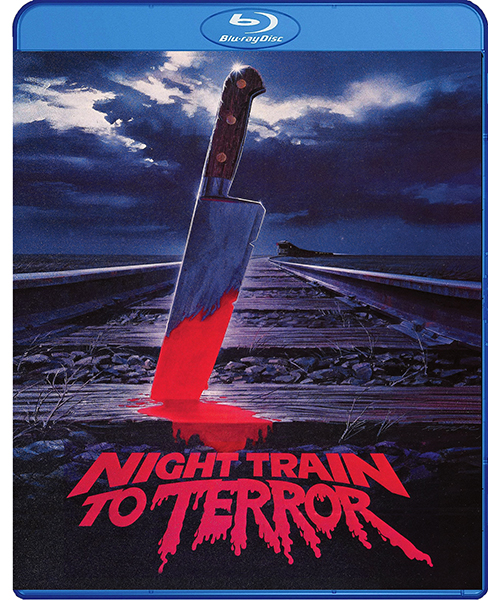 NIGHT TRAIN is ostensibly an anthology film consisting of three films written by Philip Yordan, the writer of the likes of JOHNNY GUITAR and DETECTIVE STORY, who spent his later years working on lower-budget genre films like the underrated BLOODY WEDNESDAY and the Mormon origin story BRIGHAM.  At the time of NIGHT TRAIN’s creation, only one of the films, CATACLYSM (released by Troma as THE NIGHTMARE NEVER ENDS) had been finished, and the multiple producers decided to tie an abbreviated version of that film along with two projects that had yet to be completed into an anthology, piecing together the segments in the guise of the Devil (THE GODFATHER’s Tony Giorgio) and God (FRIGHTMARE’s horror star Ferdy Mayne) on a train, discussing the fates of the souls of a rock band on board the doomed vehicle.  There is also breakdancing.

Describing the contents of NIGHT TRAIN as a mess is, to say the least, an understatement.  The first segment, titled “Harry” on the Blu-Ray box, is taken from an unfinished film starring John Phillip Law as a man who coerces women and ends up in a plot involving a castle, women being imprisoned and having their body parts being sold on the black market, and Richard Moll as a henchman who meets a bloody demise.  It’s hard to come up with a plot synopsis more coherent than that – the film itself ended up being “completed” by the copyright owner years later and released to VHS as SCREAM YOUR HEAD OFF – and then completed again by Yordan with additional footage featuring Law and a woman playing Marilyn Monroe and released as MARILYN ALIVE AND BEHIND BARS! 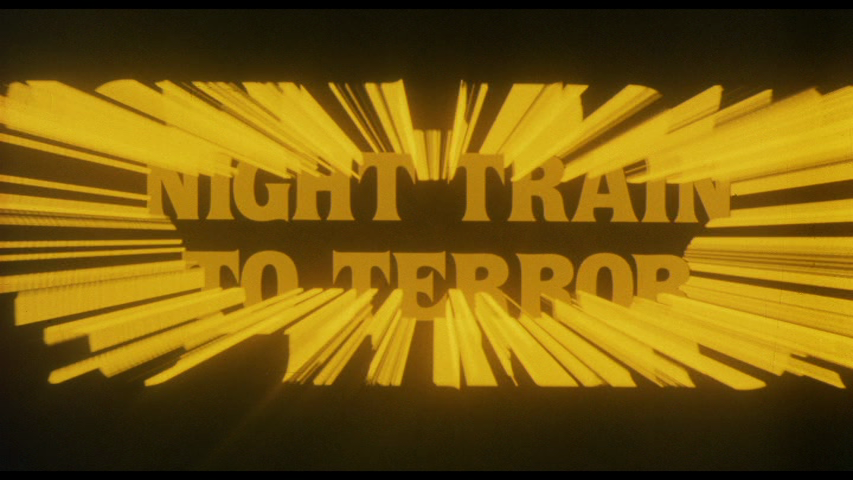 Even more confusingly, this “edit” of the film, like all of the segments, features extra special effects sequences that aren’t in any other version.  Someday, some enterprising film fan will turn each of these flicks into three-hour-long composite epics.  It will not be me.

The “Harry” segment does a fine job at representing NIGHT TRAIN as a whole – it doesn’t make a damn bit of sense, but it’s curious enough to warrant your attention.  It’s difficult to judge things like the performances when you have no idea what the hell the characters are supposed to be doing in the first place, but it’s got enough of a strange lurid early ‘80s grindhouse vibe to make it tolerable, even if any entertainment value is purely accidental. 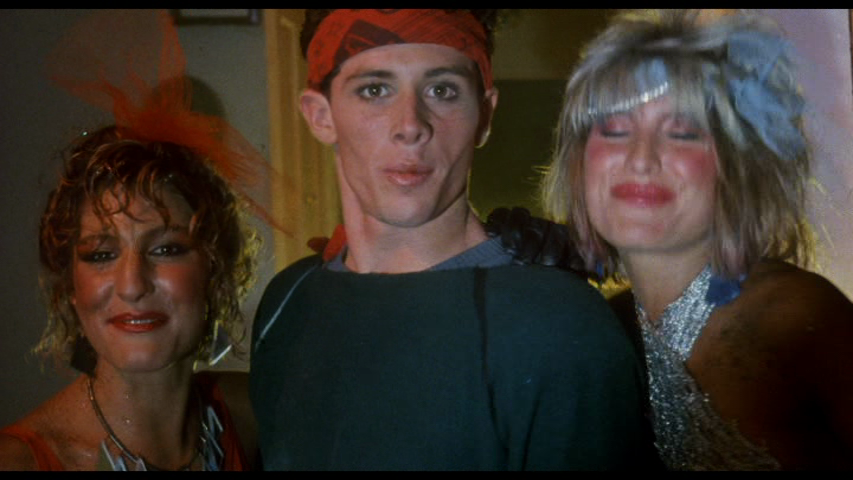 The second segment, “Gretta,” is a stripped-down version of John Carr’s then-incomplete THE DARK SIDE OF LOVE, also known as GRETTA and released to VHS and DVD as DEATH WISH CLUB and CARNIVAL OF FOOLS, with some additional gore footage added not present in that film’s final release.  As far as NIGHT TRAIN is concerned, the segment involves college student Glen (Rick Barnes, who resembles Jeremy Irons playing Christian Bale) and his quirky girlfriend Gretta (Merideth Haze) who become involved in a group that taunts death by gathering together for games that are essentially more intricate versions of Russian Roulette.

Easily the most coherent of the three segments, “Gretta” benefits from some genuinely exciting “impending death” sequences that manage to be entertaining despite the stripping of much of the actual film’s plot.  You may even be so enthralled by the sequence where the group plays a deadly, electrified version of musical chairs that you may not even notice that one of the characters has changed genders! 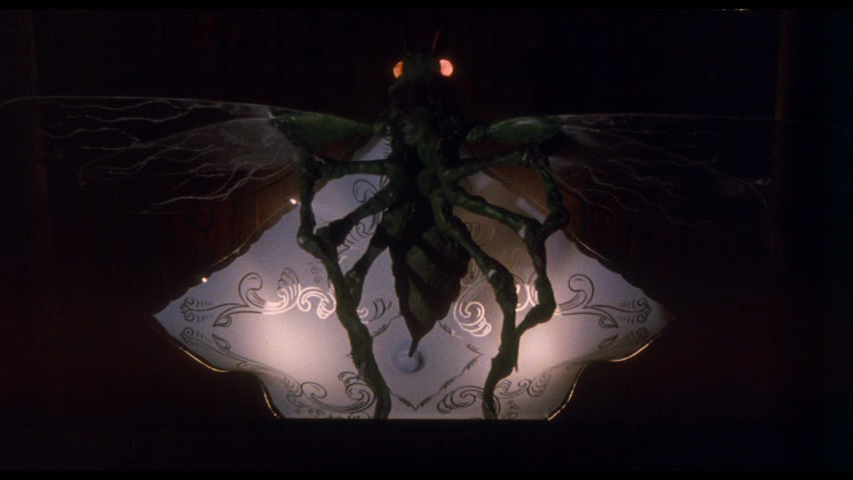 The final segment, “Claire,” is a truncated version of the multi-film pack staple CATACLYSM, which has three credited directors on its own!  Those who’ve seen that film can fill in the blanks — but as least we get the idea that it has something to do with an old man (Marc Lawrence) who spots the Nazi who imprisoned him during WWII who hasn’t aged a day, a detective (Cameron Mitchell) who helps him track him down, and the author (Richard Moll again) of a book on atheism called “God is Dead” in battle with the ageless Nazi, and also Satan.  Some stop-motion segments in the climax should wake you up, if attempts to follow the plotting have made your brain shut down.

The film climaxes without much of a twist ending, and Satan doesn’t even seem to notice the Satanic aspects of the tale they just watched!  In between, we get lots of breakdancing and the film’s theme music, “Everybody’s Got Something to Do” lip-synced by Yordan’s son Byron, and repeated so often it will inhabit your dreams for months, nay, years to come. 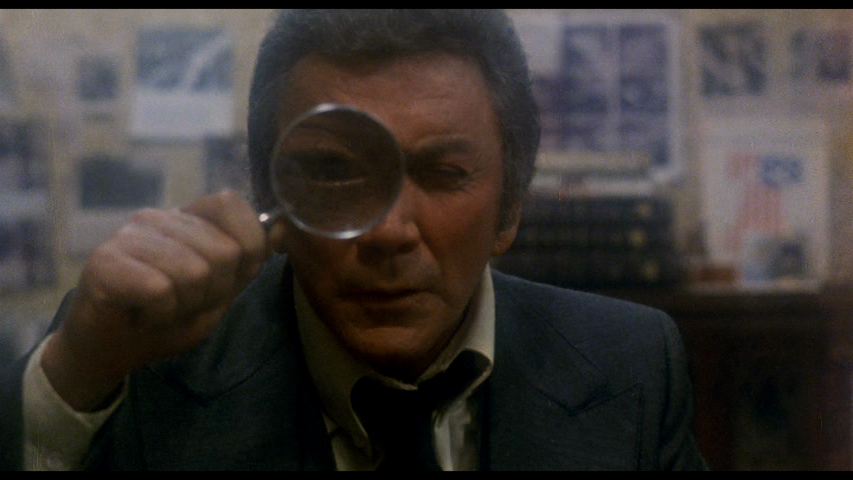 A regular component of multi-feature sets like this one, NIGHT TRAIN TO TERROR has most commonly been seen in the form of direct VHS transfers, but Vinegar has done a fine job, restoring the film to its proper 1.85:1 aspect ratio and utilizing 35mm film elements.  (Unbelievably, the film did manage a theatrical release in 1985, and imagining the confused looks of audiences at the time makes for entertainment in itself.)  While it’s patchwork origins ensure that it’s never going to be a great-looking film, NIGHT TRAIN is undeniably a colorful one, especially in the interstitial sequences in which dancers bound around in new wave clothing so vibrant it looks like a lost laundry detergent commercial.

In addition to cleaning up the film, you also get a pair of commentary tracks, one with producer/director Jay Schlossberg-Cohen and the other with podcasters The Hysteria Continues.  Visual artist Schlossberg-Cohen, who produced the film and directed the train sequences that tie everything together (sort of), sounds as though he’d been waiting decades for someone to ask him about his life and is such an exuberant presence that interviewer Joe Rubin barely bothers trying to shift the conversation — and there’s really no reason for him to.  An interview pasted over the film rather than a scene-specific commentary, the track is about as lively as it gets, even if Schlossberg-Cohen is so busy talking about his own (very interesting) experiences that he doesn’t get to NIGHT TRAIN until the movie is on the final segment! 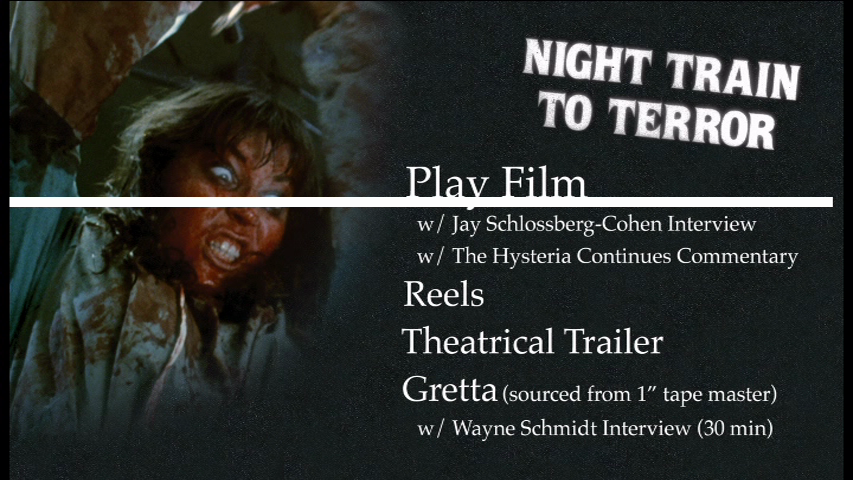 The Hysteria Continues contributes as entertaining, more traditional, commentary track as well, complete with well-researched information and pointing out the segments that are unique to this particular incarnation of the films.  The only sour notes are hit when they mention that Richard Moll is dead (he isn’t, and they later retract that) and getting too focused on the film’s Mormon aspects, the idea of which seems to come entirely due to the fact that it was produced in Salt Lake City.  (Outside of some locations, there’s really nothing Morman-centric about the films.)

The biggest bonus feature on the set is present only on the DVD — the complete GRETTA!  Previously released on DVD by Trinity Home Video in a bargain version under the DEATH WISH CLUB moniker, Vinegar’s release restores the film to its proper, and more accurate, name, as the “Death Wish Club” depicted in NIGHT TRAIN amounts to only a small sub-plot of Yordan and Carr’s wild flick.  GRETTA could certainly warrant a release on its own, as it’s a compellingly strange enough flick to warrant a much bigger following than it has, and it comes from a vision considerably more focused than the ones that created NIGHT TRAIN. 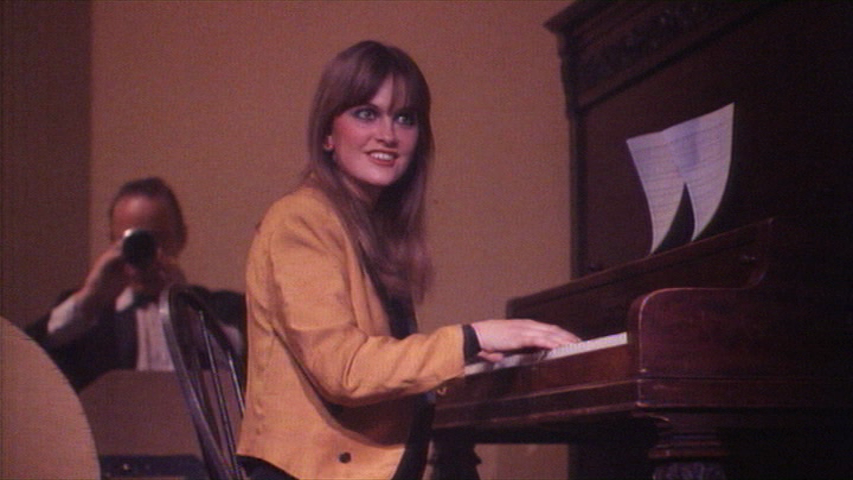 In GRETTA, J. Martin Sellers plays George Youngmeyer, a wealthy club owner who wants nothing to do with love and buys people for his own amusement.  His latest “conquest” is Gretta, a carnival popcorn seller who has a fair share of psychological problems of her own.  Youngmeyer hires her as something of a companion, giving her a job as a piano player in his club and getting her to work in sadistic (and occasionally comic) porn films.  It’s in one of these films that she’s spotted by Glen, who tracks her down and gets involved with her life, as bizarre as it is.

The two join the aforementioned club, but that’s actually one of the more standard aspects of the film, as the unbalanced Gretta soon fakes her own death and re-emerges as Charlie, a horndog young man who “replaces” Gretta both at the club and in Glen’s life!  Glen sees a therapist for ideas as to how to get her back to “normal,” and his suggestion is to essentially rape her while she’s asleep! 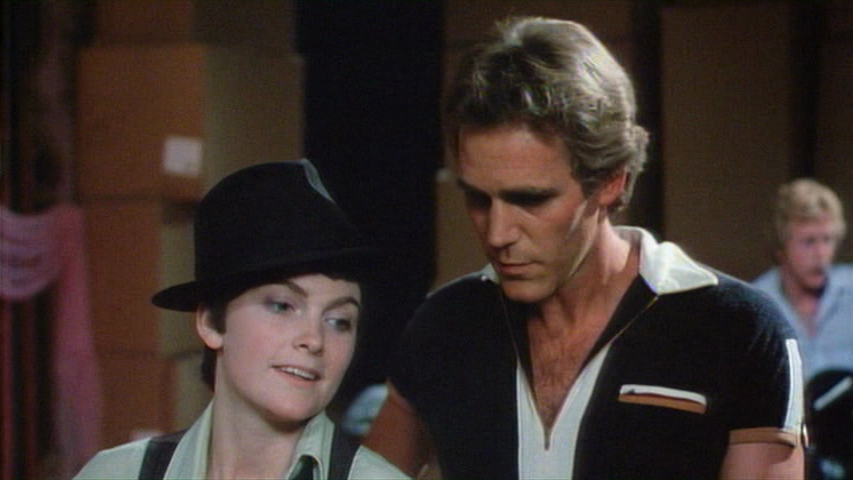 These aspects are just the tip of the iceberg of the strange twists that GRETTA holds, and while the film is a heck of a lot more coherent than much of NIGHT TRAIN, character motivations are, to put it mildly, questionable.  And through it all, the most compelling part is the performance of lead actress Merideth Haze in her sole film role, whose performance is something akin to P.J. Soles auditioning for a role as a sexual psychotic in a Russ Meyer movie.  Every line reading and preening look is a treasure, whether she’s pretending to be a fish or mocking a flirting transvestite.  It’s a wonder of a rendering that defies notions of “good” or “bad,” and it just simply engrossing — if you can look away from her wide eyes and snide grin, you’re a more powerful man than I.

A second audio track on GRETTA features a 30 minute interview with editor Wayne Schmidt, who talks about the film’s troubled production and mentions the comedic bits hat were added later (and post-NIGHT TRAIN), such as Glen’s neighbors listening in and ranking his sexual conquests.  It certainly lends some context to the film, but it is a shame that Haze, Sellers or Barnes could not be reached for information as well.  (While the IMDb lists director Carr as alive, the interviewees on the disc mention his passing.) 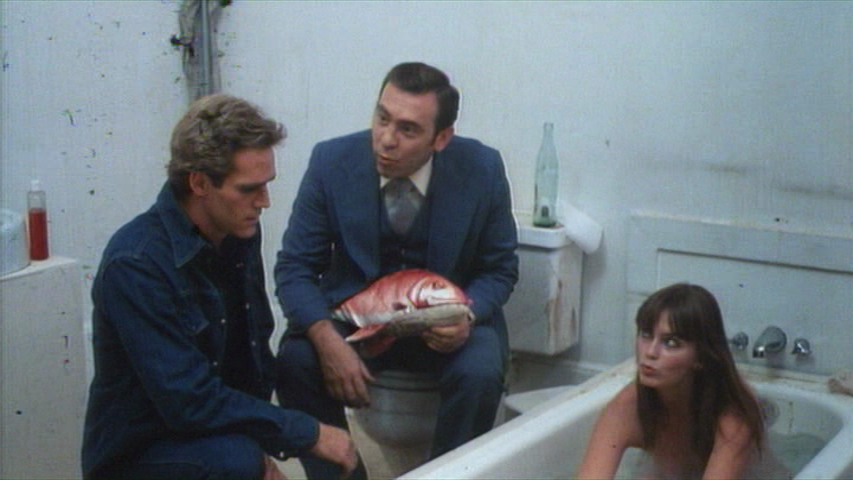 A trailer for NIGHT TRAIN is also included on the disc, rounding out a great presentation of a genuinely strange film.  Vinegar Syndrome continues to be a Criterion of the grindhouse, bringing new light to films that have been long cast by the wayside.  NIGHT TRAIN TO TERROR may have been ubiquitous by its inclusion on countless multi-film sets, but Vinegar’s release finally gives it a format in which to be properly appreciated. 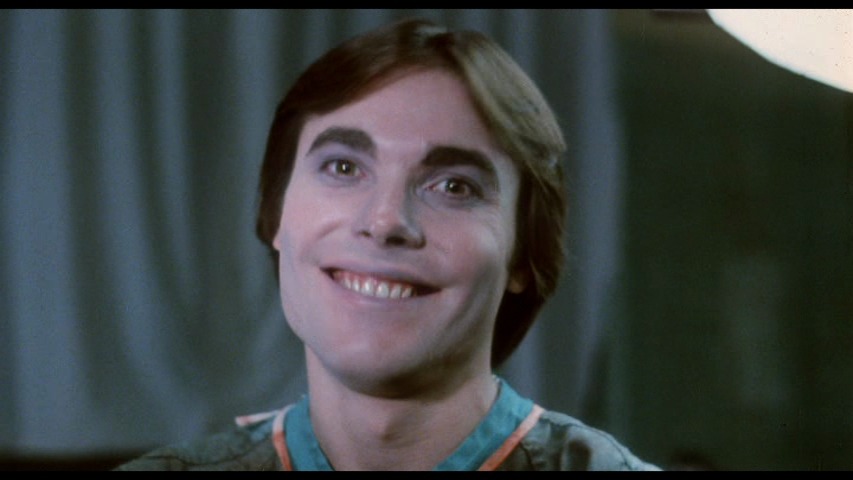