I’ve been sitting on THREADS for a few weeks.

Severin’s new Blu-ray of Mick Jackson’s 1984 made-for-BBC film about the effects of a nuclear holocaust has been sitting on my desk for longer than it should, staring me right in the face and demanding that I watch it to write it up for Daily Grindhouse.  Every day, I’d see it, and I’d feel the pressure to pop the disc in the player and spend the evening devouring the film and the copious amount of extras.  And every day, I’d falter, because THREADS scared the hell out of me. 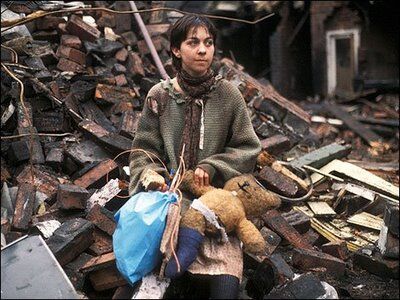 I grew up in the early ‘80s Cold War era of nuclear paranoia, a timing that coincided with my burgeoning love for science fiction and horror films.  As a result, I would gleefully watch anything set in the conceptual future, and in that age, there was no shortage of conceptual futures in which large cities are reduced to a steaming pile of rubble due to nuclear annihilation to choose from.  Those with a more realistic bent, such as the made-for-television THE DAY AFTER, COUNTDOWN TO LOOKING GLASS and SPECIAL BULLETIN, the pulse-pounding romance MIRACLE MILE or even the unjustly obscure Australian film ONE NIGHT STAND, appealed to me greatly, as they contained characters and situations that were identifiable, a long way from the compelling-but-not-relatable worlds of MAD MAX or its infinite rip-offs.  As a result, I ended up with a special focus on those the films that depicted the actual nuclear event in some regard, films like WHEN THE WIND BLOWS, DEF-CON 4, or predecessors like INVASION U.S.A., LADYBUG LADYBUG or FAIL-SAFE.

I’d gotten so acclimated to the specter of nuclear holocaust from my viewings that watching about it more never seemed to faze me.  The exception to this was Lynne Littman’s TESTAMENT (1983), a haunting tale of a family in a small town far from the nuclear holocaust itself, but one more compelling than the bombast of THE DAY AFTER due to its quiet, more character-based focus on watching a group of genuinely well-written characters dealing with the effects of both nuclear radiation and the dismantling of society around them.  These were characters like you or I, dealing with situations in a very real way, a depiction that was outright frightening even though the film itself is one of the more tame entries into the genre when it came to showing the physical horrors of radiation.  TESTAMENT, which I saw theatrically as a nine-year-old (my father wasn’t one to coddle me when it came to exposure to adult subjects, a tendency I’m grateful for) after it was initially made for PBS, hit me harder than any other depiction of nuclear winter than I’d seen.1

And then came THREADS. 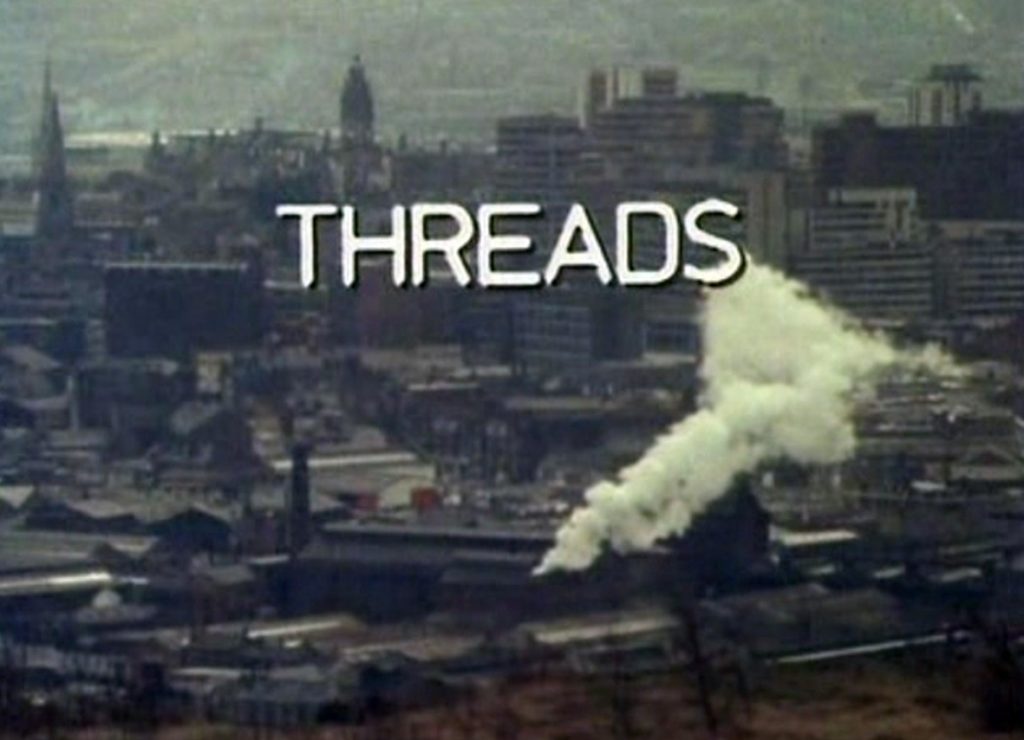 Written by Barry Hines and directed by Mick Jackson (later a high-profile director who helmed THE BODYGUARD and VOLCANO), THREADS was, like TESTAMENT, created originally for television – in this case, the BBC.  Also similar to TESTAMENT, THREADS is told from a very down-to-Earth point of view, showing the plight of everyday people and never cutting to the “big picture” in which men in suits talk in government offices, making decisions that will affect the rest of the world.  (While we do get some government employees, they’re solely local residents trying to maintain their area with limited information and resources provided to them.)  As a result, THREADS captures the same emotional center as TESTAMENT – we’re personally involved in the lives of the characters we can identify with before they are forces to deal with the catastrophes around them. 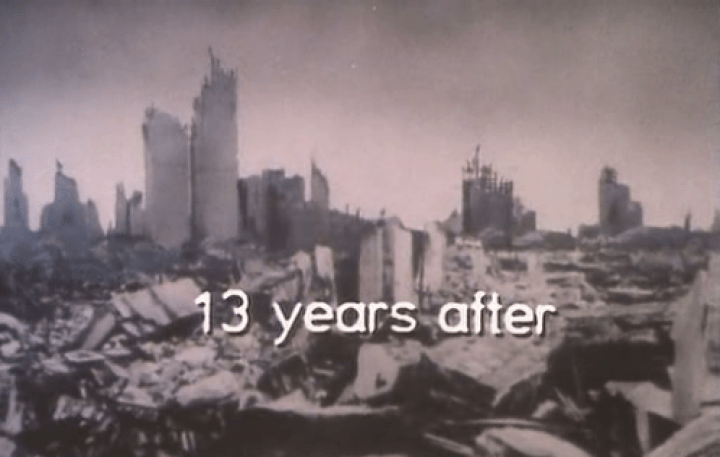 THREADS, however, isn’t a story of a family feeling the effects of the catastrophe on a gradual level.  THREADS starts off in this vein, following young lovers Ruth and Jimmy and their impending marriage – a proposal accelerated, if not initiated, by Ruth’s unexpected pregnancy.  The first half hour of THREADS details their working class families, whose welcoming-if-not-enthusiastic reaction to their nuptuals is believable and brings takes the characters from caricature to genuinely empathetic human beings.  The influence of Ken Loach’s working class tales (Hines had previously written Loach’s KES) is plainly evident, and you could conceive of spending the next two hours just watching these everyday residents of Sheffield go through their daily business. 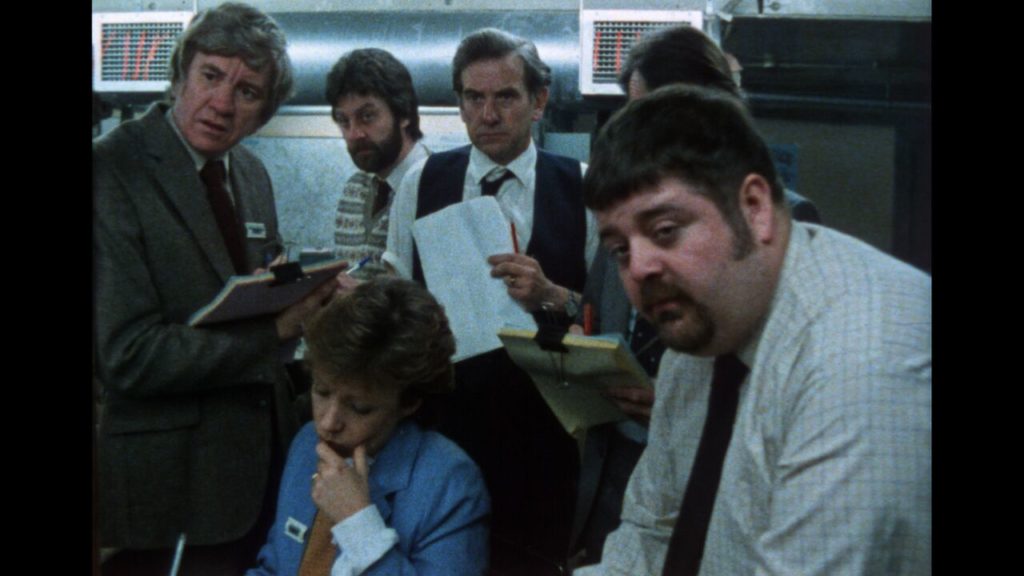 In the background, however, chaos looms.  News reports, seen in bits and pieces via background televisions, radio chatter to be dismissed by characters looking for sports scores, and occasional person-to-person vague talk of something the government is doing, portend to an escalating political situation that those on screen begin to take more notice of as tensions rise.  Eventually, the inevitable nuclear bomb is dropped, and the on-screen horrors that befall the almost-newlyweds make the ramifications of TESTAMENT feel like minor inconvenience that must be overcome in between a sitcom’s commercial breaks.

Admirably, THREADS doesn’t stop at depicting the immediate aftermath of the attack, and in fact, this is where the film treads into territory rarely explored by creators of the cinematic apocalypse.   The remainder of the film’s running time follows the survivors of the initial blast, struggling to find food, water and shelter while dealing with the effects of radiation and the deterioration of all essential services around them. 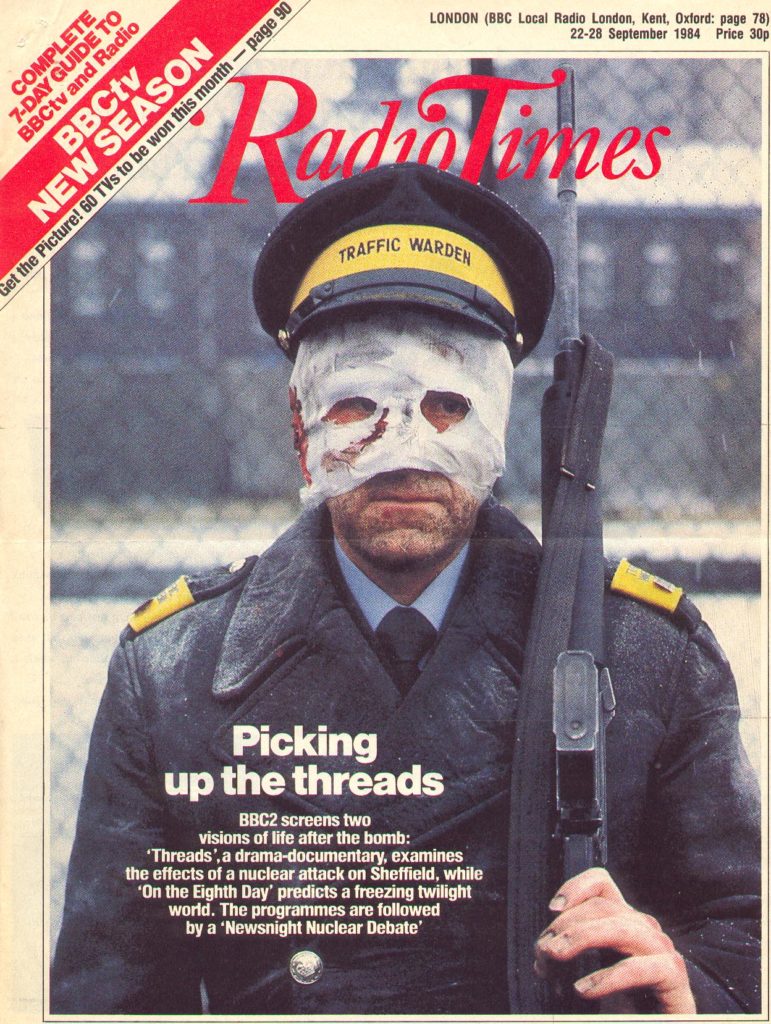 The journey that THREADS takes you on is one that’s alternately captivating and horrifying, to the point where it becomes almost unbearable simply because both the characters and situations they’re faced with are treated with such honesty that you can’t help but to identify yourself in the same situations.  What would you do?  The answer, you begin to realize, would be the same – die slowly while valiantly attempting to carry some vague semblance of normalcy with you, even in the slightest hope that things could get back to “normal,” and yet knowing that ultimately, they would never do so.

The unrelentingly downbeat “lesson” from THREADS (I hesitate to call it “pessimistic,” as that implies that the events it presents aren’t realistic results of a nuclear catastrophe) is accentuated by the film’s matter-of-fact tone, punctuated by occasional narration that explains the devastating effects of nuclear fallout and the approximate repercussions of it to societal structures as a whole.  These are the only segments that remove the audience from the street-level viewpoint, and being based on theories from factual data, aren’t so much a “God’s eye view” of the world of the film but present a conceptual, and believable, future of the world we live in. 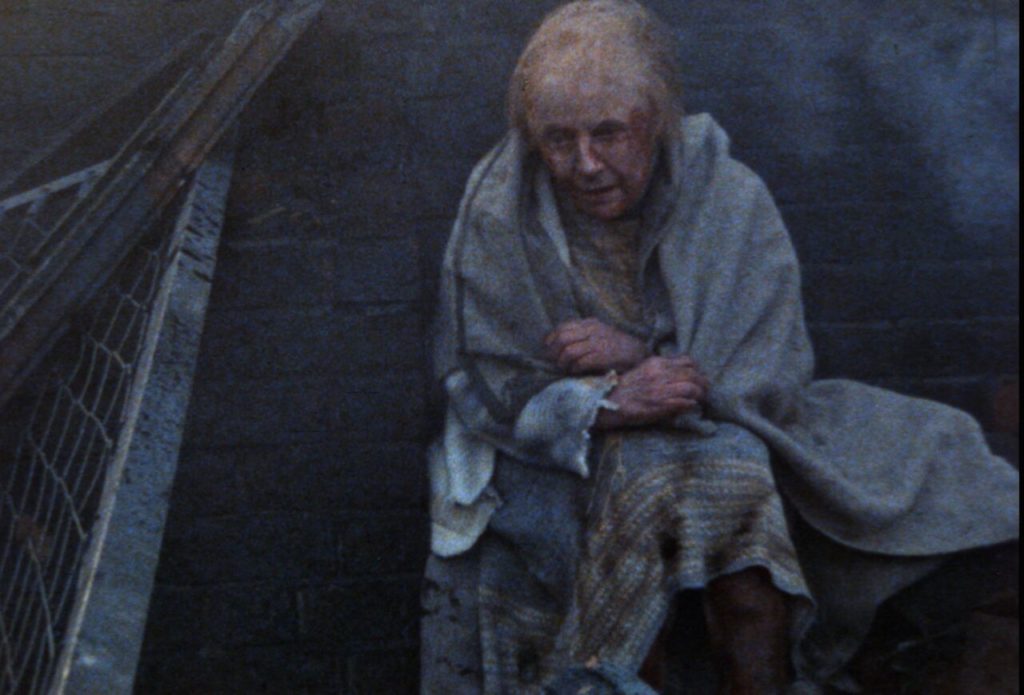 THREADS is a devastating, inordinately powerful film, and I can only imagine what those who sat down for a nice evening of television in 1984 thought of it.  (Thankfully, the supplemental materials on the disc help to provide this context.)  Even being adequately warned of its content, my watching it on VHS affected my teenage eyes in a way few films had before or have since, to the point where I was genuinely afraid of revisiting it nearly 30 years later, not because I was frightened that it wouldn’t hold up, but because, for once, I was genuinely terrified that it would.  In an age where nuclear paranoia is back on the forefront due to those in charge of such matters having mindsets far too untrustworthy and infantile to be counted on when it comes to having an understanding of the actions they take, THREADS wasn’t a trip I relished taking again.

As a result, it sat on my desk until I could steel myself.  Finally, weeks after it had mocked me enough, I prepared a shot of scotch and put the disc into the Blu-ray player.  The house was empty (THREADS is not an experience you want to inflict on random passers-by), I’d worked up the courage, and I was ready to revisit one of the great cinematic demons of my childhood. 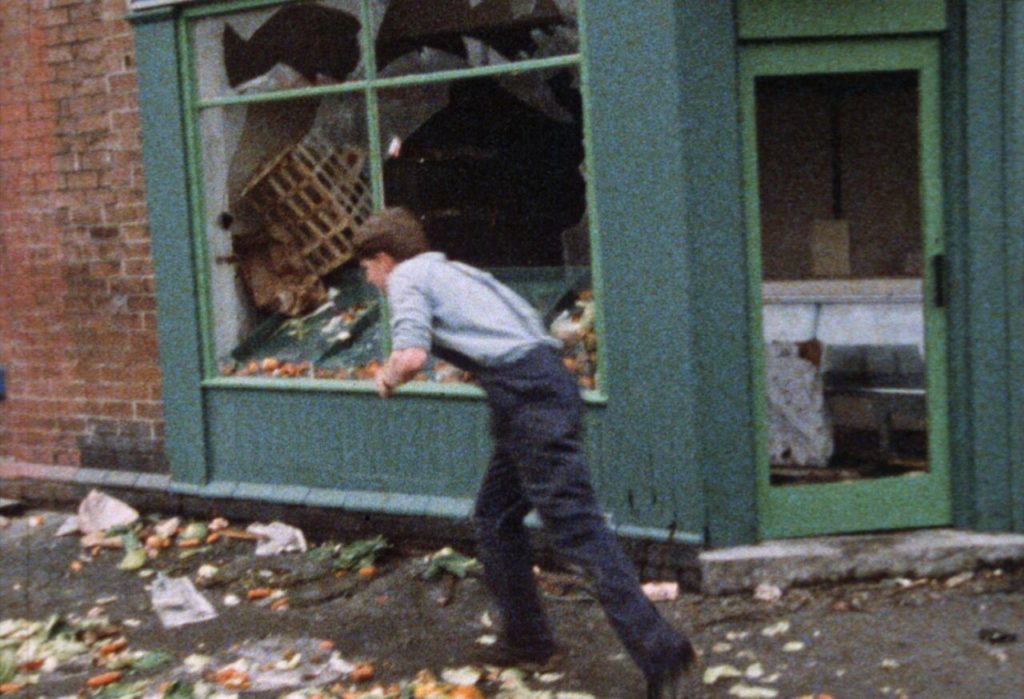 I don’t know if “pleased” is the best way to describe my reaction, but I can certainly say that THREADS holds just as much power today as it did in 1984.  It’s a genuine masterpiece of apocalyptic filmmaking, stumbling only mildly at the very end when so much time has elapsed since the initial attack that the sights seen border on being unbelievable solely because they’re such difficult scenarios with which to identify.  (The stumbling, then, may not be the film as much as its faith in humanity’s ability to empathize.)  It’s the sort of film that’s virtually impossible to shake off, and, if you’re anything like me, one that will stick with you for decades. 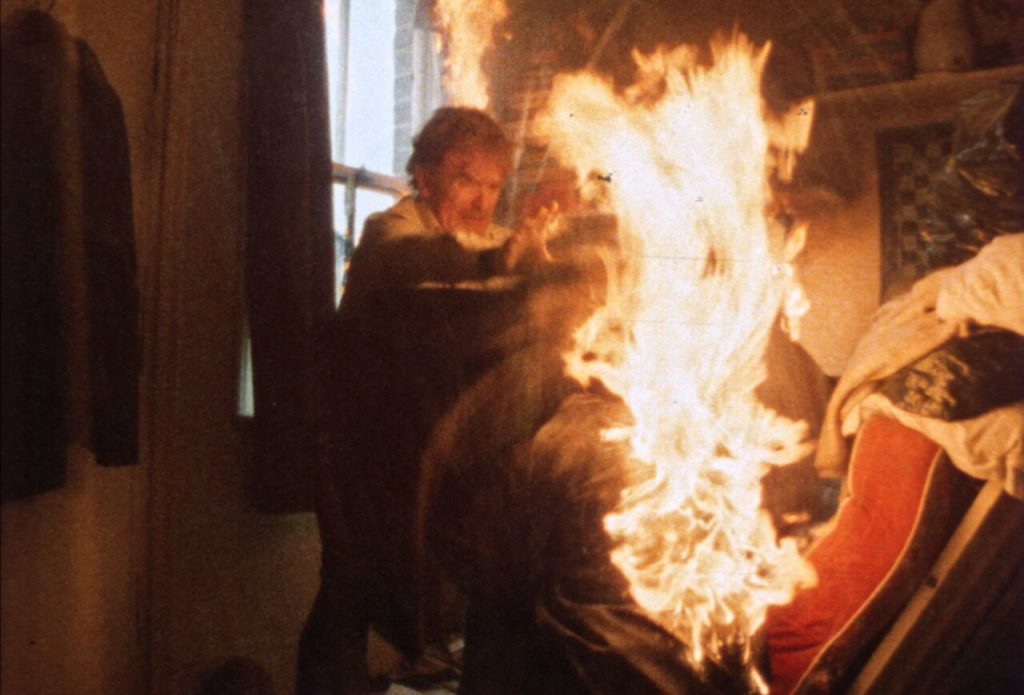 Severin has done their usual fantastic job with presentation, restoring the film in HD from a 2K scan that looks as good as a made-for-television movie from 1984 ever will.  An audio commentary with director Jackson moderated by the ever-welcome Kier-La Janisse and David Gregory is available as well, and while the commentary rarely feels scene-centric (Jackson talks more about the movie generally rather than specific moments), it’s always engaging, with the moderators and Jackson having an admirable rapport that delves deep into the film’s creation and its battles with getting made.

Additional features include a chat with lead actress Karen Meagher, who speaks about the film while inside a church (?!), as well as interviews with Director of Photography Andrew Dunn and Production Designer Christopher Robilliard.  Nightmare, USA author Stephen Thrower is the subject of the final interview, and while Thrower isn’t directly associated with the film, he talks about the context in which the film was originally seen and the reactions to it from both the viewers and the world at large, and it serves as a fantastic recap as to the importance of THREADS’ place in film history. The U.S. trailer is also included.

I hesitate to “recommend” such a grim experience, but there’s no doubt in my mind that THREADS deserves to be seen by anyone willing to face the realities of a potential nuclear war – and to my mind, this should be all of us, if we wish to have any input at all into the machinations that could potentially get us these.  THREADS is a one-of-a-kind experience, and Severin has done a wonderful job at bringing it into the digital era.  I wish there wasn’t a need for a film like THREADS, but I’m certainly glad that a film like THREADS exists to address the need for it. 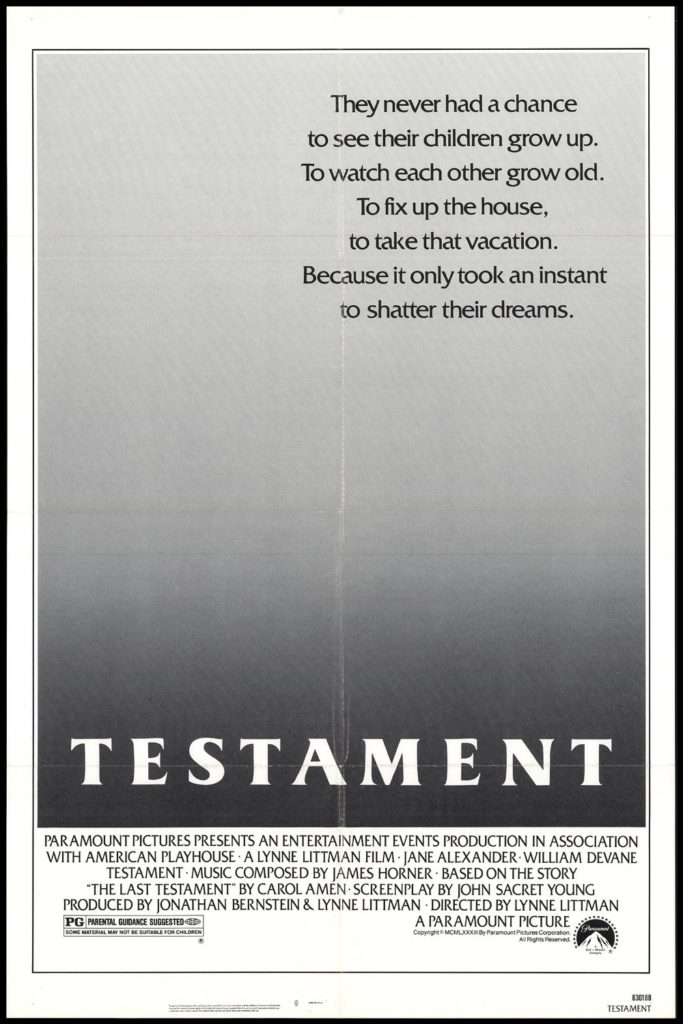 1 – Someone please release TESTAMENT on Blu-ray.  It’s languished in out-of-print limbo for far too long, though Warner has a DVD-R available.